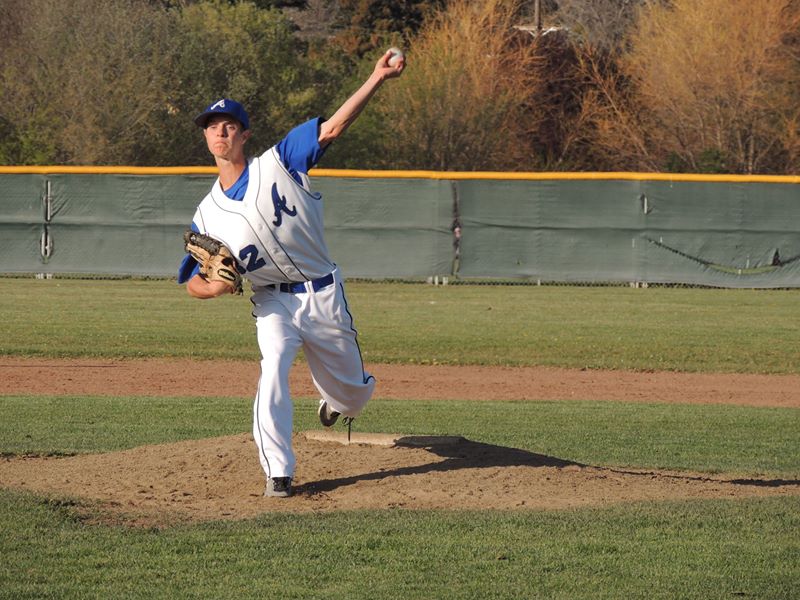 It didn’t take a long extra inning marathon this time, although for a moment the thought was here we go again.   This time Analy made it three for four against Petaluma in the regulation seven innings, taking a 7-5 victory in the Sonoma County League Post Season Championship game.   Now both teams wait until Sunday to find out what awaits them in the North Coast Section playoffs.

In the extra inning marathons, they played two completely different kinds of games which were both won by Analy.    The first one was a 9-8 game that went 12 innings, the second was a 15 inning 1-0 game.

Petaluma assured quickly that this wasn’t going to be like the 15 inning game.   Cameron Myers lined a double, which brought in the first run before the first out was recorded.   Myers would score on a RBI single by Austin Thomason and Petaluma was feeling good about getting revenge by taking a 2-0 lead.

They didn’t have that lead very long.   In the bottom of the first, Analy’s first three batters reached to load the bases.   They did that without getting the ball out of the infield with two walks and a bunt single.  Kenny Beeler and Joaquin Meckler each hit singles that brought in two runs and just like that Analy had a 4-2 lead.

A pickoff looked like Petaluma would get out of the inning, but Kyle Early followed with a double and scored on one of Trojans two errors and Analy had a 5-2 lead.

That is when the game took the feel that these two teams just have to play extra-inning games.   Petaluma scored single runs in the second, third and fourth innings to tie the game at 5-5.  It was the runs Petaluma didn’t get that would come back to haunt them.   They left two runners on in both the second and fourth innings and also had a runner thrown out at the plate to end the third.

While Petaluma was coming back, Analy was being kept at bay by sophomore Jared Robison, who came into pitch in the second inning.   After walking the first batter he faced on four pitches, he retired the next nine, before issuing walk number two to start the bottom of the fifth.    After getting two outs, Analy got two clutch hits to regain the lead.  The first was a RBI single by Evan Hill, the second a triple by Meckler, which gave him a season high third RBI of the game.

There would be no dramatic comeback in this game, although Petaluma did have two runners on in the sixth and didn’t score.   Evan Hill retired the side in order in the seventh to raise his record to 5-2.

The win makes it sixteen straight for Analy and gives them a season record of 22-4.   Petaluma drops to 19-7, three of the losses to Analy.

If you are hoping that we will see these two teams meet again in the playoffs, that won’t happen.   Petaluma is in Division 2 and Analy is in Division 3.   Petaluma will probably have a first round road game.   Analy could be as high as a No. 2 seed.

The game was one of three post season tournament championship games on Friday.   The regular season champion also took the other two.

During the regular season Maria Carrillo and Montgomery also played two different kinds of games.  One was a tight one run game; the other Maria Carrillo took an early lead and controlled things.

The NBL baseball final was closer to the tight game as Maria Carrillo held a one run lead most of the way, before taking a 3-0 win for its twenty first straight win.

Keith Wallach and Zach Scott led the win.  Scott went the distance only allowing two hits and a walk.   He also drove in the only run he would need with a safety squeeze in the first inning, which scored Wallach who tripled. Wallach drove in the other two runs with a fifth inning single.

Maria Carrillo is 24-2 on the season and is hoping for at least a No. 2 seed in the NCS Division 2 playoffs.  Montgomery drops to 16-7, three of the losses to Maria Carrillo, and should get a first round game at home.

The suspense was over early in the SCL Post Season Softball Championship Game.   A six run third powered Petaluma to a 9-3 win over Sonoma Valley.   Brie Gerhardt had four hits to raise her batting average to .530 and drove in two runs to lead the way.

Petaluma is 20-6 on the season.   Sonoma Valley drops to 14-12.  Both will be in the North Coast Section playoffs.

WILL IT WORK AGAIN?

During the first two rounds of the state playoffs, the SRJC baseball team went 4-0 in elimination games.   To make it to the State Final Four they will have to be 6-0.

For the third straight week they lost the opening game of the best of three series, this time it was a 2-0 loss to San Joaquin Delta.

The only score came in the third inning which was a two out, two run homer by Phil Clark, his second of the season.   Matt Velencia pitched 7 2/3 innings of two hit ball to raise his record to 10-2.  Through the first seven innings, SRJC didn’t have more than one base runner.

SRJC did have runners at first and second with one out in the ninth.   Eric Sandness got the game ending double play to pick up his fifth save of the season.

Brandon Hagerla went all eight innings for SRJC and takes the hard luck loss to drop to 8-4.