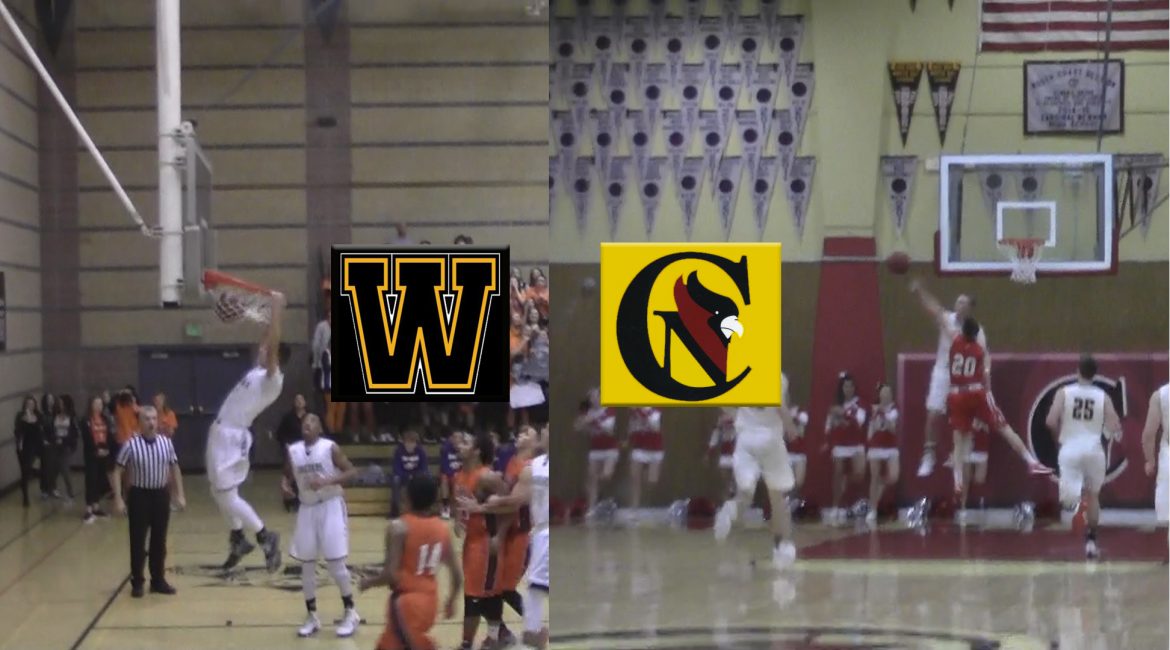 
The North Bay League races didn’t register that high on the excitement meter because the league champs were clear cut league champs. Both league champions went 14-0, with the second place team finishing 10-4. You take the top teams out and you would have had a pretty interesting race.
The first round of the post season tournament played out the same way. The No. 1 teams won easily, while the other games were pretty close.
Both the Windsor Boys and the Cardinal Newman Girls had their game in hand by the beginning of the fourth quarter and took one sided wins.
The other two games had the suspense. For the first time this season the Montgomery-Cardinal Newman Boys game played out to the end. Cardinal Newman rallied from seven points down in the fourth quarter to take a 57-54 win. They had to hold their breath as a three pointer at the buzzer to get the game into overtime was short. Connor Rubattino led Cardinal Newman with 18 points. Cardinal Newman went 3-0 against Montgomery this season.
On the Girls side, Santa Rosa had a big fourth quarter and defeated Ukiah 50-38 with Emily Codding leading the way with 15 points.
This is the third straight season that Santa Rosa and Cardinal Newman Girls have met in the title game with Cardinal Newman winning the first two. Cardinal Newman, who has a ten game winning streak, won the two league games each by over 30 points.
Two years ago at this time the Cardinal Newman Girls were starting to make their mark in the area. In a nine day period they defeated Santa Rosa twice, once to get a tie for the regular season championship and then to win the Post Season Championship. They haven’t been tested locally since.
The same can be said for the Windsor Boys this season. They had one close game and that was a two point win over Montgomery the last week of the league race. The rest of the games were all double figure wins, including both games over Cardinal Newman.
There are a couple of reasons to hope for close games.
On the Girls side, it is a rivalry between Santa Rosa and Cardinal Newman. Also Santa Rosa stayed close for a half in the first meeting this season, before Cardinal Newman pulled away in the second half. That being said, if Santa Rosa won it would be a shocking upset.
On the Boys side, it wouldn’t be a shocking, but would be an upset if Cardinal Newman won. They do have last year’s Player of the League Connor Rubattino back after an injury he received during the football season. In each of the last two games, he has been the game’s leading scorer. He scored 18 in the win over Montgomery.
All Cardinal Newman Coach Tom Bonfigli has to mention is past experience to convince his team they have a chance. Going into the 2009 championship game Cardinal Newman was 27-0. They lost to Piner 55-46.
If you are going to the game get to Piner High School early. It would be shocking if this isn’t a turn away crowd.
SONOMA COUNTY LEAGUE
CHAMPIONSHIP NIGHT
SATURDAY AT SRJC
GIRLS—No. 1 Analy (17-10) vs. No. 2 Sonoma Valley (19-8)…6:30
BOYS—No. 1 Analy (20-7) vs. No. 3 Petaluma (18-8)…8 pm
The first round of this tournament played out a little like the regular season. There was some suspense in each game and at least going by the seedings, a surprise in one.
The surprise was in the Boys Division, with No. 3 Petaluma going on the road to defeat No. 2 Petaluma 56-43. Ryan Perez led Petaluma with 18 points.

It is only a surprise from the seeding point of view. This game was rated as a tossup. The two teams each protected their home court during the regular season and tied for second in the SCL race. Piner got the home game because of the numbers drawn before the season.
The other game was a thriller with Analy going overtime to defeat Healdsburg 43-40. Travis Holmes hit two free throws with :30 left in the OT to give Analy the lead for good.
That was after a regulation when Healdsburg led most of the way. Nick Fujii got hot in the fourth quarter scoring eight of his game high 16 point in the fourth quarter to give Analy the lead. Landon Courtman, who is a junior, led the way with 15 points to put him over the 1,000 mark for his career. He scored the basket to force the OT.
Analy won the SCL regular season championship with a 10-2 record. One of the losses was to Healdsburg.
The win guarantees Analy a twenty win season for the seventh time in eight years under head coach Brett Page.
This sets up a rematch between Analy and Petaluma, which was the area’s game of the year in the regular season. The two teams were playing for the SCL title and Analy scored the winning hoop with :15 left to take a 51-50 win.
On the Girls side, it was setting up for a Sonoma Valley-Analy game. The two teams won against each other on their home court and tied for the SCL Girls Title. The losses to each other were their only league losses.
In the first round game, Jenny Eggers scored 21 points and pulled down nine rebounds as Sonoma Valley rallied in the second half to defeat Petaluma 56-43. Sonoma Valley outscored Petaluma 38-19 in the second half.
In its first round game, Analy led for the start and defeated Healdsburg 46-27. Sophie McFadin led the way with a season high 22 points. Analy led most of the way and had a double digit lead cut to three early in the fourth quarter before outscoring Healdsburg 19-3 to finish the game.
The winner of this game will get the SCL automatic bid for the North Coast Section playoffs, although both teams will get in.
Even though Analy has a mini-dynasty going during the regular season, they haven’t had as much success in this tournament. This year’s championship is their fourth in seven seasons. They have only been able to turn that into one SCL post season tournament championship, that being in 2013, which was a year they didn’t win the regular season title. That is the only post season tournament Analy has won since it began in 1987.
Sonoma Valley, who has won back to back league titles, also has won one Post Season Tournament Championship. That was in 1995.
Championship night for this tournament was played at Elsie Allen High School last season. It was played at the same time as the NBL show at SRJC . It is moving back to the JC and deserves the “Super Bowl of High School Sports Label” in its own night.
They should be two good games.
NCL I
AT MENDOCINO COLLEGE
ROUND ONE
FRIDAY
GIRLS
No. 2 Kelseyville vs. No. 3 Cloverdale—3:30
No. 1 Middletown vs. No. 4 Clear Lake—6:30
BOYS
No. 2 Lower Lake vs. No. 3 Fort Bragg—5 pm
No. 1 Cloverdale vs. No. 4 Kelseyville—8 pm
SATURDAY
CHAMPIONSHIP DAY
GIRLS—4 pm
BOYS—5:30
This is the first time they have a post season tournament in few years and it was almost stopped before it was played. The first round was originally scheduled for Thursday, but complications prevented that so they pushed it back a day.
On the Boys side, Cloverdale is the NCL I champions and already has the league’s NCS guaranteed spot.
Kelseyville and Middletown tied for the Girls championship. Who does the best in this tournament will get the guaranteed spot.
The first day schedule went in order of seedings instead of common sense. There are two Cloverdale-Kelseyville games. The Girls game is the first game of the night at 3:30, the second one the last game of the night at 8 pm.
Not very fan friendly.
NCL II NOTE
The Roseland University Prep and St. Vincent de Paul Boys go into the final league game Friday Night tied for first in the league race. It they are still tied they will have a playoff game for the automatic spot on Saturday at 6 pm at Sheppard Elementary School in Santa Rosa.
On the Girls, side Sonoma Academy has a one game lead over St. Vincent de Paul. The guess is if they end in a tie they would have a game too.
My email address is jacpasquini@comcast.net
Share