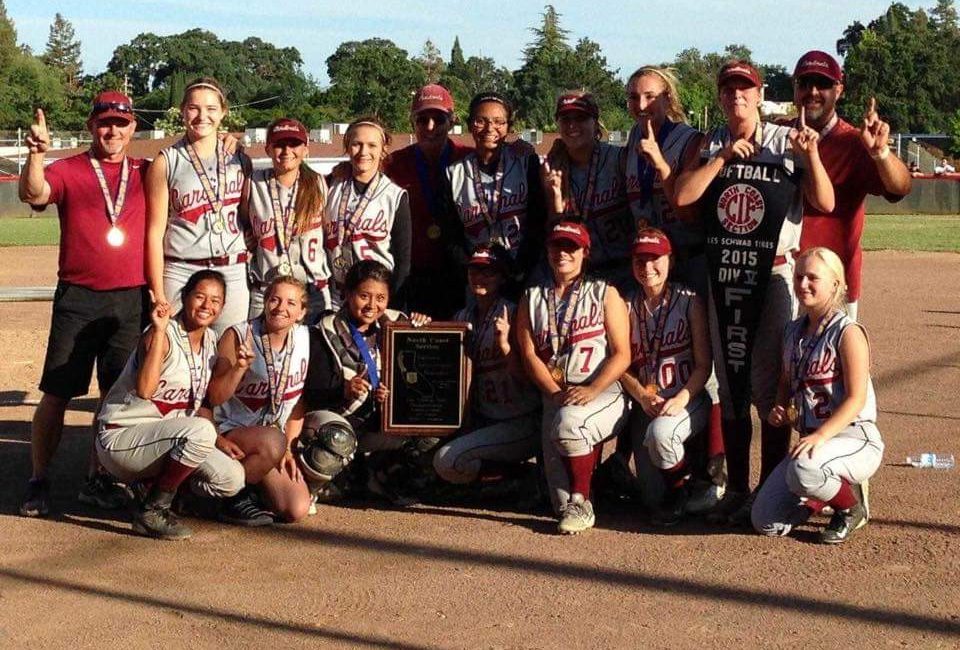 The Clear Lake Cardinals softball team is usually one of the best teams in the area.  The NCL I power usually takes on, and holds its own against some NBL teams in the pre-league part of the schedule.  They are always a contender in the NCL I race, usually with Cloverdale.  The NCL I rules seem to be if Cloverdale doesn’t win the league championship, Clear Lake does.  This year they were co-champions.
When it comes to North Coast Section playoffs, the Cardinals have had their frustrations.  There was the 2011 game against Maria Catholic when they led 10-6 after five, before dropping a 12-10 decision.  In 2009 they went to the championship game before falling to St. Patrick/St. Vincent 2-1.
The 2015 team got over the top by taking a 5-1 win over St. Joseph-Notre Dame in the NCS Division 5 championship game.  The win also gave Clear Lake its first twenty win season since 2010, when they went 21-5.  This year’s version went 20-6.
The game was the kind of pitching duel you expect in a championship game.  Clear Lake had one shot at a rally and they took full advantage of it. A ctually it didn’t look like a shot at a rally.  St. Joseph-Notre Dame pitcher Anekaila Crevani struck out the first two batters she faced in the third.  She couldn’t get out of the inning, giving up two singles.  Then on a 0-2 pitch, Aliza Atkins drilled a three run shot over the left field fence to give Clear Lake a 4-0 lead.

Four runs are usually enough for starting pitcher Rachel Wingler and it was more than enough in this game.  Wingler, who hit a homer in the second for Clear Lake’s first run, went the distance striking out seven.  She was the winning pitcher in all of the Clear Lake wins this year. A fter giving up a leadoff single, she retired ten straight.
St. Joseph-Notre Dame did have some chances.  In the fifth and sixth, they had runners at second and third, but couldn’t come up with the clutch hit to make things close.  They broke up Wingler’s shutout with a two out single in the seventh.
Clear Lake ended the season winning sixteen of seventeen. The lone loss was to Cloverdale in the NCL I tie-breaker game.  It is the threeird section championship in school history.  The last one was in 2007, when the team went 27-0.
LOCAL SPLIT
Tomales made the long trip to Eureka.  Once they got up there, they ran into a buzz saw. Senior Logan Thrap struck out 13 to lead St. Bernard Catholic a 5-0 win.  Colton Stokeberry drove in the first of his two runs in the first, which turned out to be the game winning hit.  St. Bernard Catholic won its second straight NCS Championship and sixth in nine seasons.
Tomales, who won a section crown in 2013, ends the season 12-9.
My email address is jacpasquini@comcast.net