Cloverdale vs. Cardinal Newman Was The Classic Small-Big Matchup 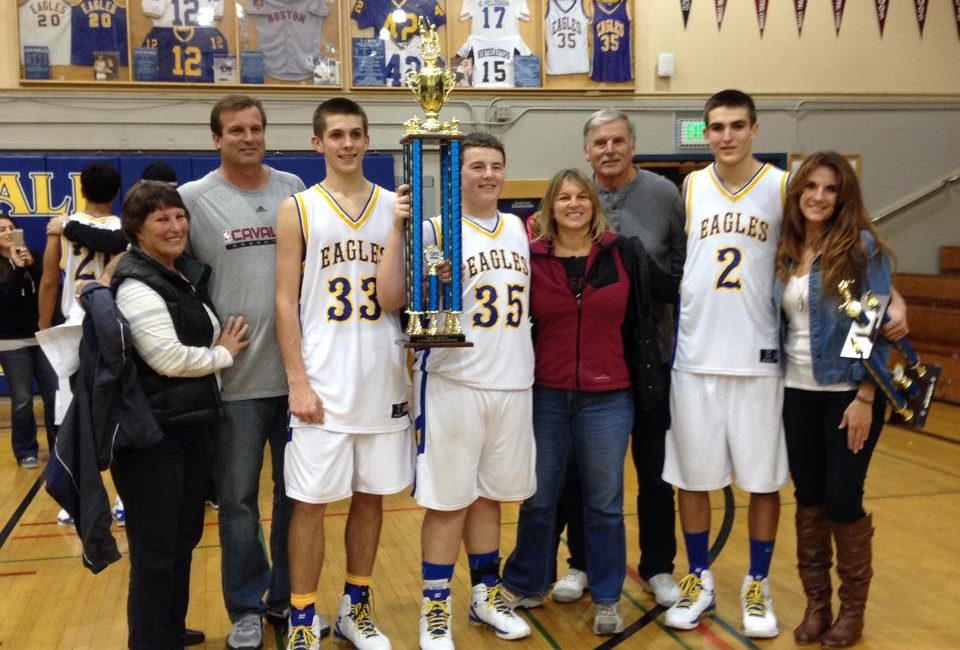 Back in the day when the Press Democrat was doing the weekly rankings, they split the schools up by Large and Small Schools. If you were in the NBL or SCL, you were a large school. If you were an NCL team, you were a small school.
I have followed Cloverdale for a long time. Most years, the Boys Basketball team is listed in the small school rankings and many times at No. 1. A long time ago, I wondered how some of those teams would have done against the large schools. When I was in high school, Cloverdale did have a fairly aggressive schedule and played some large schools. I remember one game in particular at Analy. They scored ten straight points to end the game to take a 51-49 win.
The Eagles played well against teams like Healdsburg and El Molino. Back then, Cardinal Newman was in the SCL and Montgomery in the NBL and they were the teams in those leagues. Cloverdale didn’t have them on the schedule and I was left wondering.
The lines of Big and Small schools are a little more blurred now. The NCS playoffs didn’t start until the late 70’s, but until recently the Big and Small schools couldn’t meet in them. That is one reason why at YSN our rankings mixed the schools up, they can meet in the playoffs, an example is Cardinal Newman’s first two games this year.
For old school people like me, the NCS second round game between Cloverdale and Cardinal Newman is thought of a game between the No. 1 Big and Small School teams in the area.
It is still hard for some to get used to the new system. For teams like Cloverdale, playing a team like Cardinal Newman is rare. If you were brave enough to have them on the regular season schedule, it meant you were a special team for Cloverdale standards. Now it’s a playoff game and isn’t the first between the two. Just two years ago, No. 2 Cardinal Newman defeated No. 15 Cloverdale 75-46. Although that Cardinal Newman team didn’t win the NCS title, they did go to the state championship game.
The two schools also met in a Girls first round game last year with No. 5 Cardinal Newman taking a 63-38 win over No. 12 Cloverdale. So unless something changes, old school people like me have to get used to the idea that the two could meet in the playoffs. and it probably won’t end well for Cloverdale.
What I think I learned over the years, is takes a special Cloverdale team to compete with the likes of Cardinal Newman. One of those special teams wasn’t too long ago. That was the Robby Rowland team in 2009 and 2010 that went a combined 55-6. That is when the good ole days ended. In 2009, they were in Division 5; in 2010 they moved up to Division 4 and have been there ever since.
The 2010 team took the Casa Grande Brett Callen Memorial Tournament Championship and participated in the Sonoma County Classic. In the second round, they were edged by Cardinal Newman 59-56 in a game that was close from the start.
The 2010 NCS Brackets Division 4 Brackets didn’t work out that the two teams would meet. Both teams won its league race and both lost in the second round, Cardinal Newman as a No. 5 and Cloverdale as a No. 6. Cloverdale lost to the eventual section champion St. Mary’s 64-60. St. Mary’s went all the way to the state championship game.
The year before, Cloverdale lost in Round two of the Division 5 playoffs, the last year of the good ole days. As a No. 3 seed, they lost the semi-final game on a buzzer beater 57-55 to St. Joseph-Notre Dame. That team defeated Branson in the championship game, ending its five year run as champions. St. Joseph-Notre Dame also went to the state championship game.
Of course, if you are any age at all, you remember the real special Cloverdale teams that won two state championships in the early 80’s. They had the two Craig’s, McMillan and Bergman, and you could see something special was coming. Cloverdale coach John McMillan was either hoping or saw it coming too, and scheduled up, way up.
Cloverdale played in back to back Rose City tournaments; the first three Sonoma County Classic’s and one of the Holiday Tournament in Cloverdale, which is now named after John McMillan, had most of the large school powers in it, including Cardinal Newman.
The Sonoma County Classic was really that in the early day with all the teams from Sonoma County. Cloverdale won the first three, the first one when I’m thinking of best games I have ever seen it comes to mind. Cloverdale defeated Montgomery 63-57; in a game Craig McMillan scored 42 points and an unbelievable drive the length of the floor through the Montgomery defense in the last seven seconds to force the game into overtime.
Cloverdale didn’t play Cardinal Newman in that Sonoma County Classic or the Cloverdale Tournament. But they did have four games in a three year period against them.


The first was in December of 1981 in the second round of the Rose City Tournament. The game was decided on a buzzer beater by Tom Sullivan, the shot was in the air when the horn went off, and gave Cardinal Newman a 43-41 win. With less than two minutes left, Craig McMillan fouled out as most of the gym thought he was being fouled, and scoring with the score 41-41. That is known in Cloverdale as take your pick: a game that was stolen or the phantom foul.
The next two years the two teams played a home and home series. The first one was in January of 1983 and that game went double overtime with Cardinal Newman taking a 50-49 win. In that game, Craig McMillan missed most of the third quarter, picking up his fourth foul thirty seconds in before fouling out with 3:30 left in the game. Yes, it was the same official as the year before, and yes Cloverdale fans think that official was on the Cardinal Newman payroll.

When thinking of best games I have ever seen, those two games come to mind too.
That loss broke a 26 game Eagle winning streak. They would win the next 48. Two of them were over Cardinal Newman the next season. The Eagles got their revenge in a big way in the second Sonoma County Classic Championship Game, taking a 30 point lead at the half, before coasting home to a 75-55 win. A week later in a regularly scheduled game, in an era with no shot clock, Cloverdale defeated Cardinal Newman 25-21, with a much younger head coach Tom Bonfigli playing the stall game.
I am not sure what we will see Saturday is one of Cloverdale special teams. But anytime Cloverdale plays Cardinal Newman, it is fun to look back.
My email address is jacpasquini@comcast.net
You can also now follow me at twitter @homer2612
Share