Concord Does It To Petaluma Again 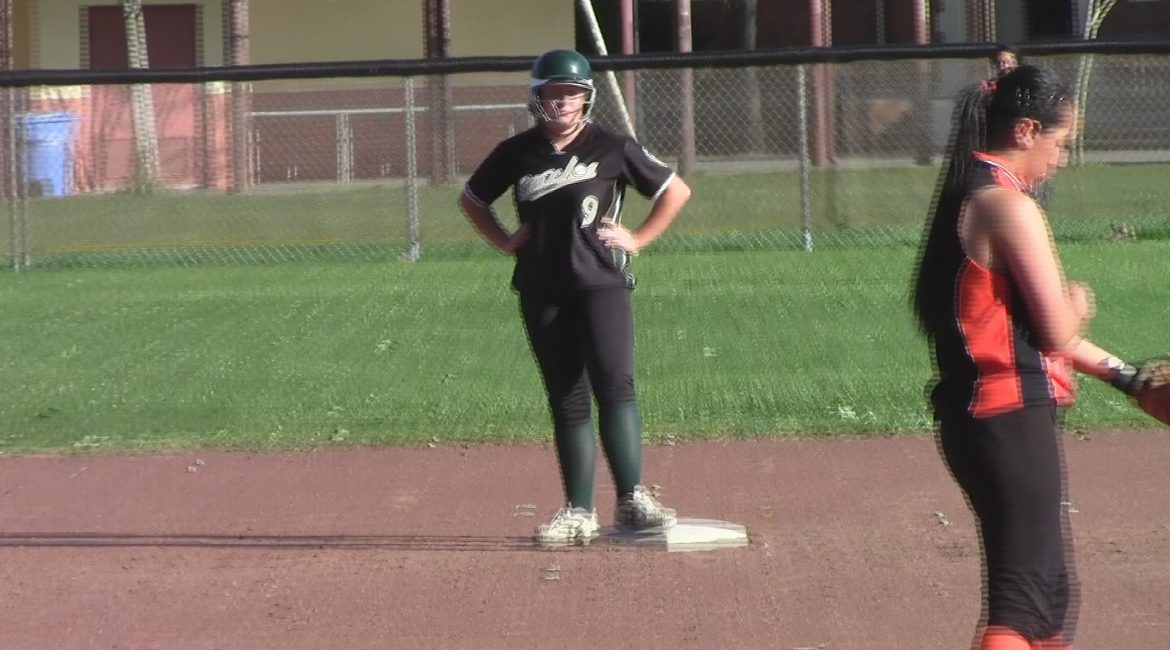 The seasons over the last four years have been better each year for the Petaluma softball team.  They have led to one NCS Championship.   The other three years have ended in the same theme.  Meeting Concord in the NCS playoffs and losing a one run game.

It happened again on Tuesday as Concord made a fifth inning run stand up in a 1-0 win to move to the NCS Division 2 Championship game.   Concord will meet the winner of today’s other semi-final  game between No. 3 Clayton Valley and No. 2 Alhambra.

For Petaluma it is a disappointing ending to a season in which their only other loss was in the season’s first game, a 2-0 loss to Pinole Valley on March 7th.  Twenty six wins followed, which included wins over Concord and Alhambra.   The streak also included the march to a SCL championship, both a regular season and post season tournament title.

Then came the playoff game with Concord.

As expected it was a pitching duel between Kelly Drake and Dana Thomsen.  Each team had five hits and the two combined for nine strikeouts.

The lone run was nothing spectacular.  It came on a single, a ground out, a sacrifice with the run coming in on a RBI single by Courtney Davis.

That came in the top of the fifth, which was a half-inning after Petaluma had the same kind of inning.  Same kind, that is except for the two out hit.

That is how close it was, how close it was expected.   It was hoped that the odds would go Petaluma’s way after losing two straight one run games in the last three years as Concord took NCS Division 2 Championships.

There was some good news out of Petaluma in the NCS playoff game.

The St. Vincent Softball team moved within one game of successfully defending its Division 5 championship.  After falling behind early they rallied to beat Holy Names 8-3.

After a slow start, Hayley Olson was dominating allowing only one hit.   That hit came to the first batter of the game which was followed by two walks and two wild pitches which gave Holy Names a 2-0 lead.  It was the fourth time during the current nine game winning streak that they fell behind in the first inning.  As has happened each time before, they had plenty on offense to breeze home.

A four run third gave them the lead, which was followed by a three run fifth that put things away.  Morgan Selmi and Alexis Torres each had three hits and drove in a run in the fourth.  Torres added a two run triple in the fifth.

St. Vincent is 16-8 on the season and will defend its championship on Saturday at 4:30 pm at San Marin High School.  They will meet the winner of today’s St. Bernard-College Prep game.  That is a rematch of the semi-final game last year won by College Prep 5-0.  College Prep then lost the championship game to St. Vincent by the same score.

So it wasn’t a good ending for the team that dominated most of the softball headlines throughout the season.  On Wednesday it is baseball’s turn to take the next step and like the Petaluma softball team, they are going to try to reverse recent playoff history.

In Division 3, Sonoma Valley is really going against the recent history.  As a No. 4 seed they are at No. 1 Acalanes.  In the four years, the No. 1 seed has won 3 1/2 of the four section championships.   The missing half was in 2011, when a co-championship was handed out to No. 1 San Marin and No. 3 Acalanes.   After the original date of the championship game was postponed by rain, the game was moved to a Tuesday afternoon.   The game was stopped because of darkness after ten innings of a 4-4 tie.  Both teams agreed to the co-championship.

Adding to the history, Sonoma Valley is trying to break a two year losing streak as a No. 4 seed against the No. 1 seed in this game.

Sonoma Valley has won six straight and with a win not only will they go to the Section championship game, but they will hit the twenty win mark for the second straight season.

Analy made it to this game as a No. 5 seed in 2009 and lost to No. 1 Miramonte, who of course being a No. 1, went onto win the Section Championship.

Analy meets No. 2 Drake at Albert Park in San Rafael for a night game that begins at 7 pm.   The game is in Marin County because of the game the two teams played on April 10th in Analy, a game Drake won 3-0.

That is where No. 4 Sonoma Valley is at in its semi-final.

Not only does Casa Grande have the Sonoma County playoff history going against them, they can’t even rely on the No. 1 seed magic as much as Division 3 can.  During the same period, the No. 1 seed in Division 2 has won two of the four championships.  The second one was last year by Campolindo, which was their third straight section championship.  The other two years they were a No. 4 and No. 2.  The No. 1 seed didn’t make the championship game either of those seasons.

Casa Grande is hosting No. 5 College Park.  Only one No. 5 seed has gotten to this round and that was College Park last year.  They were defeated by No. 1 Campolindo 10-0.

There is some favorable history for Casa Grande.

Both teams got to the semi-final with wins over North Bay League teams. Casa Grande defeated Cardinal Newman 9-3 while College Park held off Maria Carrillo 4-3.

College Park finished two in the Diablo Valley league one game behind Clayton Valley.  Just like the Softball teams the league is thinking NCS Championship game.  Clayton Valley is at No. 2 Campolindo in the other semi-final game.

St. Vincent will play for the Section Championship Saturday at San Marin High School at a time to be announced.  They will play the winner of Wednesday’s game between St. Bernard and College Prep.