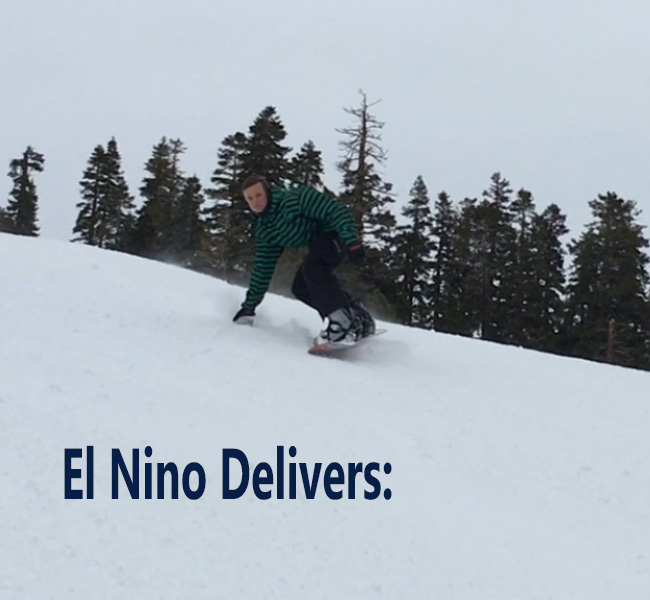 Finally, the season of snow we have been hoping for has arrived. The conditions are great as the storms line up and if you can find a break in the weather you may just hit the promised land.

Squaw Valley/ Alpine (hardcore skiing at its best)
I checked out one of my favorites, Alpine Meadows, on Sunday just after the Holiday rush had died off.  It was cloudy but not snowing all day. The price was steep but what I love about Alpine is that it caters to the skiing not the hanging out. If you are looking to get on the hill quickly and ski hard, Alpine usually delivers. I was able to park over by the Meadow chair and within less than 5 minutes and a walk of about 150 feet, we were on the lift and ready for action. We spent the morning hitting the usual favs like Roundhouse and Summit 6.
Summit 6 is an awesome chair, it carries 6 at a time and hauls buns up the mountain. A far cry from the days of my youth where you had a 20 minute wait in line that was followed by a long slow two-to-a-chair ride up to the top.
The conditions were terrific and I love the runs from the top to the bottom, especially the Wolverine Bowl.
After that, we headed to Lakeview and then Sherwood Forest for a backside afternoon. I have never found an easy way to get over to Sherwood, which may be why it is usually even less crowded. I’ts not too bad traversing on skis but if you are an intermediate or beginning snowboarder it can be difficult. If the conditions are right, Sherwood can be incredible. Varied terrain, a fast chair and less of a crowd. You can weave through the trees, take a nice groomed trail or hit the steeper bumps on the south side bowl…All Good!
After getting our fill of Alpine we drove over to Squaw Valley and finished the day with a couple of challenging runs over there.  If you like it steep, Squaw is hard to beat. One lift ticket gets you on both Mountains!
Hanging out in the village at Squaw at the end of the day is nice.

Sugar Bowl (why wear a helmet)
On Monday, we hit Sugar Bowl and drove in pretty close to the Judah Lodge.  Although not nearly as convenient as Alpine, it wasn’t too bad of a walk to the  ticket booth and lift.  It started snowing about mid day, which emptied the runs of any kind of crowd and the fresh snow was awesome.  As usual, Sugar Bowl has more snow than most and enough varied terrain to keep it interesting for sure.
Later in the day I was cruising through the trees in fresh powder and got going a bit too fast,  A large dead stump appeared after I came through a group of trees and I had no time to avoid it.  My skis released properly (thank you Tahoe Dave’s) and I flew about 8 feet, landing hard. It really scared me and may have been the worst crash I have had in over 47 plus years of skiing. Despite a deep thigh bruise I was OK and continued to ski very tentatively the rest of the day, until it hurt to the point where I could not make turns.  The take away for me was how lucky I was that another tree was not situated just beyond that stump or surly I would have hit it head first.  I was wearing a helmet, although sometimes I don’t.  After that, I always will.  ALWAYS WEAR A HELMET.
So let the snow keep coming and get up there and have a great, SAFE time.  How lucky we are to live so close to those awesome mountains!
Share