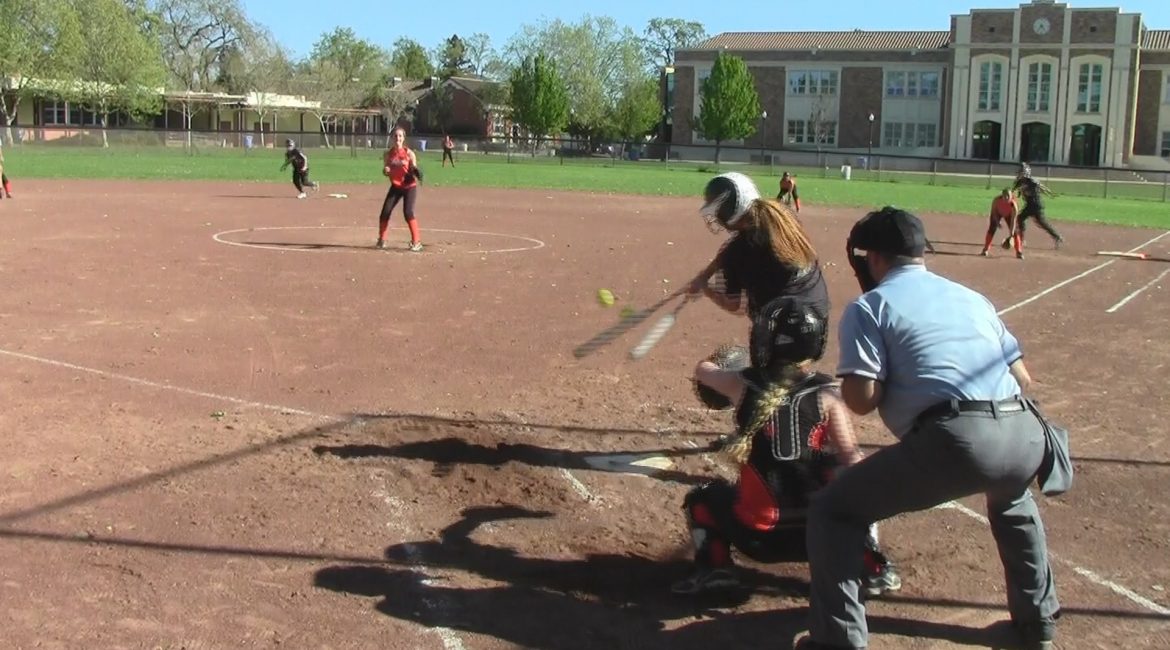 No. 1 Petaluma and No. 4 Rancho Cotate has been winning league championships the last few seasons and both came up with wins to point themselves in that direction for 2013.
Petaluma, who has won a SCL championship the last two years, defeated No. 5 Sonoma Valley 3-1.   It is Sonoma Valley’s first league loss and leaves Petaluma and Analy as the only two teams left undefeated in the race.
Dana Thomsen pitched a complete game, striking out eight, to raise her record to 8-1.  Gina Barnacle hit a two run single in the sixth to give Petaluma a 3-0 lead.
Petaluma has won eleven straight since losing its opener.
No. 2 Analy move to 3-0 with a 15-1 win over Piner.  Petaluma is 2-0 and travels to Analy next Tuesday.
Rancho Cotate has won three straight NBL and is the only undefeated team left in NBL play after letting a lead slip away and then rallying to beat Cardinal Newman 7-6.
Keilaini Fronda hit a game tying double in the bottom of the seventh and then scored the winning run on a ground out to finish off the win.
It didn’t seem like it would take that kind of dramatics.  Rancho Cotate jumped out to a 2-0 lead in the first and had a 5-1 lead going to the sixth, when Cardinal Newman scored five  to take a 6-5 lead.
Cardinal Newman is one of four teams that are 2-1 in the NBL race.  The other three are Casa Grande, Maria Carrillo and Windsor.


Casa Grande defeated No. 3 Santa Rosa 6-3 in a battle of 1-1 teams.  Video highlights are available here at ysn365.com in the Video section.
Robin Johnson struck out 13 to lead Maria Carrillo to a 3-1 win over Ukiah.
Rachelle Butulia and Melanie Duty combined on a two hitter as Windsor defeated Montgomery 5-1.  Windsor led from the start after Danielle Funez had a two run single in the first.
The NBL Softball race has the looks to the league’s Girls Basketball race.
On Thursday Rancho Cotate will be at Casa Grande and Cardinal Newman host Windsor.
TIE FOR FIRST IN SCL BASEBALL RACE
The winning streak for #2 Analy is ten after a 16-0 win over Elsie Allen.  They are now 4-0 in SCL play which is tied with Petaluma who was idle.  The two teams meet for the first time next Tuesday at Petaluma.
An 11 run fourth put things away for the Tigers, who host Drake in an important non-league game today (Wednesday).  Analy is 12-2 overall, Drake is 11-2.  Both are Division 3 teams.
The closest to Analy and Petaluma is Sonoma Valley and Piner who both have two league losses.
Sonoma Valley has won three straight since the two losses that opened league play.  The latest was a 10-0 win over El Molino.
Piner meanwhile was on the verge of a three game losing streak before scoring three in the seventh to defeat Healdsburg 6-4.   Piner is now 12-4 on the season.
NBL BASEBALL WEDNESDAY
No. 1 Casa Grande tries to keep the magic going and first place in the NBL race when it hosts Rancho Cotate.   Casa Grande is the only team left undefeated in the league race.   Rancho Cotate is one of three teams that are one game behind Casa Grande at 3-1.
The other two are Cardinal Newman and Montgomery.
Cardinal Newman hosts Windsor and Montgomery travels to Ukiah.
The other game is Santa Rosa at Maria Carrillo.
JC BASEBALL KEEPS IT GOING
SRJC came off the big series with Sierra, keeping the momentum going by taking a 9-2 win over Cosumnes River.
Ryan Xepoleas, Chase Stafford and Siosi Poti each drove in two runs.  Xepoleas hit a solo homer in the ninth, his first of the season.
By then the game was in hand.  Bryan Webster went six innings to get the win to raise his record to 6-2.
Second place Sierra defeated third place San Joaquin Delta 7-3 to stay one game behind SRJC.  San Joaquin Delta is now four games back with eight to go.
SRJC host Cosumnes River in the second game of the three game series on Thursday afternoon.
JC SOFTBALL MAKING SOME NOISE
The SRJC Softball won its eighth game in nine with an 8-4 win over Sacramento.   It was their second win over Sacramento in three games.  Sacramento is tied for first in the Big 8 race and ranked No. 6 in the state.
SRJC is 24-9-1 on the season, 10-5 in Big 8 play, which is two games behind Sacramento and Sierra who are tied for first place with six games to go.
My email address is jacpasquini@comcast.net
Share