Favorite storylines from the past year & decade

YSN 365 > News > News > Favorite storylines from the past year & decade 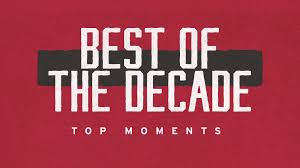 I began working for YSN365 back in August 2014. So, just right there, about half of the decade has been taken away from me even thinking about local sports. I tried to grab a few stories pre 2014, but forgive me if I missed something, and feel free to comment what it may have been below.

It all started on June 30th, 2012 with a 14-0 win over Santa Rosa American. It ended with a 12-4 win over Panama on August 26th. The near 2 month journey saw Petaluma’s boys of summer make a trip to their first ever little league world series. And heck, their toughest test pre-Willamsport may have been their first District 35 tournament. Petaluma was the town in District 35 for Little League baseball that year, as the three leagues in town, Petaluma National, Petaluma American, and Petaluma Valley were three of the final five teams remaining in that bracket. After losing to Valley 8-7 in a classic first championship game, they came back and put a whipping on them, 13-1 to clear their first hurdle. It was win after win, before then ending up in San Bernardino. An appeal to third base is successful after a Hawaii player skipped the base trying to score, and the Nationals made their way to the East Coast. There, they made it to the US Championship game. A football like score of 25-16 won by Tennessee is deceiving. Petaluma went into the bottom of the 6th 15-5. They rallied to score 10 runs to tie the game on a two out, two strike home run. As a patron at Beyond the Glory that day, the restaurant erupted, almost like you were at a professional baseball game with cheering with what seemed like the whole town in attendance. Although the Petaluman’s didn’t bring home the LLWS trophy, they brought back the second place finish in the US, and third place in the world.

Cardinal Newman in 2013 was very tough to beat. Losses came few and far between for the Cardinals that year. Monte Vista, Acalanes, Salesian and Pacific Hills can all say they beat this team. The Cardinals rolled to a 14-0 league record, and an NBL tournament championship. They lost to powerhouse Salesian in the NCS championship 65-34. They turned around and won three games to get to the state final, including a 73-66 win over Archbishop Riordan to win the Nor Cal championship. Newman fell to Pacific Hills 58-52 in the State title game at Sleep Train Arena, but no one will forget that team.

Cardinal Newman’s girls made the State title game in 2015, and brought home the victory over Antelope Valley 39-37 at Sleep Train Arena. This Newman team, like the boys in 2013, lost to Salesian in the NCS final 64-47. They decided that would be the last time they lost for the remainder of the season and rolled to three straight wins in Nor Cals, all by 16 points or more. Newman finished 31-5, and the number 12 ranked team in the state.

When you think of Petaluma High in terms of sports, you don’t necessarily jump to boys basketball. You think some great football teams, most recently in 2017, 2015, and 2009. You think of girls basketball, when coach Doug Johnson led them to the state championship game in 2000. Before the 2015-2016 basketball season, Petaluma had collected 31 wins total in the early part of the decade. New coach Scott Behrs vowed to change that. He led the Trojans to some great victories in turning around the program. It started with beating rival Casa Grande for the first time since 2009. He then led them to their first win over Cardinal Newman in who knows how many years. They didn’t win the league title, but they got the second best thing: the SCL tournament championship win in dramatic fashion. A 27-26 win at Haehl Pavilion over Analy. The team had reached the NCS playoffs for the first time since 1992. The program has since turned around and have become contenders, thanks to the foundation laid starting with this team and staff.

2017: Cardinal Newman goes on an emotional run all the way to NCS championship game

After the Tubbs fire took down a sizable chunk of Cardinal Newman high school, the school and community was looking for something to cheer for. They got it, and it was highlighted by two of the best high school football games I’ve ever witnessed. In the NCS Semi Final at Bailey Field, Rancho Cotate and Newman battled back and forth all the way to the final minute, with Newman scoring and holding on for the win. Same thing again next week, although this time with Marin Catholic. In the rain, the teams put on a slug-fest, before Newman eventually falling 59-56. Putting HS sports rivalries aside, this was a team you were rooting for after such a devastating event.

Cardinal Newman was finally able to put it all together after two straight years of elimination. The first one, the classic game against Marin Catholic, and the second one, The Coin Flip. They didn’t want to let this opportunity to slip away, so after a 13-10 win in the NCS Championship over Marin Catholic, they rolled to their final 2 victories to claim their first state championship. Cardinal Newman coach Paul Cronin racked up a 107-25-1 record of the past decade, making him one of the more dominant coaches in the state.

Rancho Cotate miraculous run to the State title game was a joy to watch. Rancho was one of the few public schools to reach the final game, and they liked it that way. A 7-0 win over Las Lomas in the NCS Championship game, and a 10-0 win in the CIF Nor Cal final against Serra got them to the CIF State Championship game. Although the Cougars fell to Bakersfield Christian, this was a team not many expected to even make it past NCS. They did that and more and provided one of the top stories of the decade.

Now, I am sure some of you are upset that I didn’t mention your team, but forgive me as I tried my best! If you want some great memories re-lived, leave a comment below or on our Facebook page.