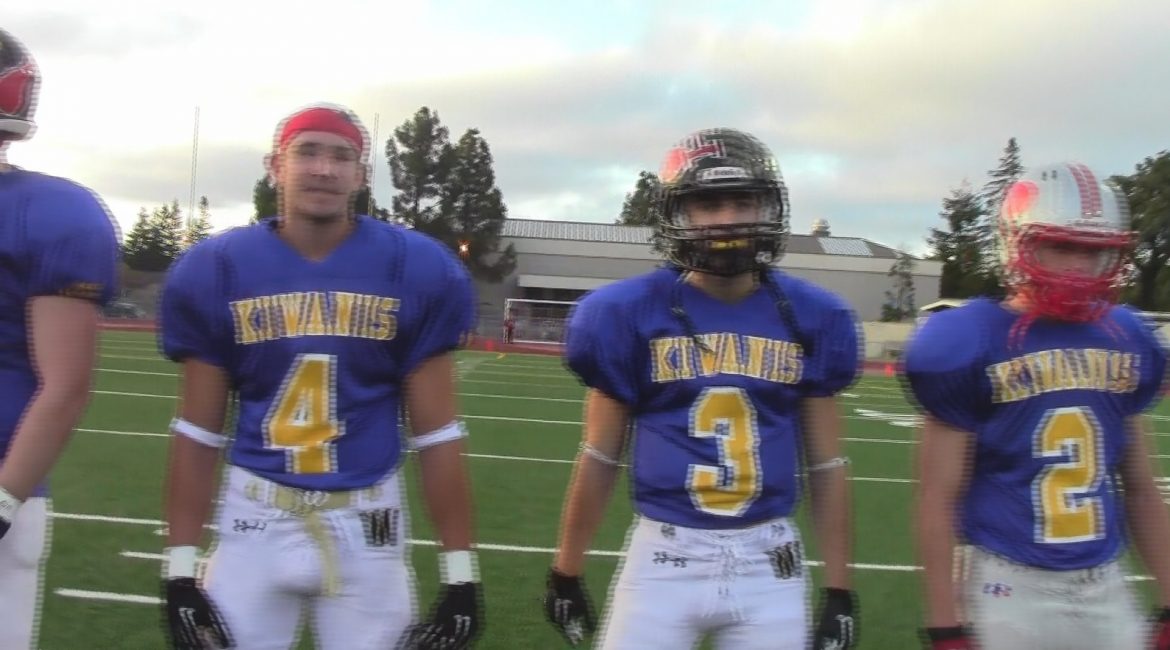 The Annual Richard Bigham Memorial High School All Star Football Game had a format change for the 41st edition of the event, which was played at Santa Rosa High School on Saturday Night.   When the game first started in 1974, the game was between Sonoma and Marin County.   In 1992 it changed to the North Bay League vs. the Sonoma County League.   This season it was a good old battle between the North and South, with both teams made up of players from mixed leagues.

Then they went out and played two different kinds of games in the same game.


The first half was a wild scoring affair, while the second half neither offensive could move the ball very well.   In the end, the South had the only score of the second half and defeated the North 28-14.  The game was decided with five minutes left when South quarterback Mitch Hood of Sonoma Valley hit Jonathan Weber of Casa Grande on a 17 yard touchdown pass on what might have been the play of the night.   Weber made a leaping catch near the sideline and did a super job getting a foot inbounds to complete the score.   It was Weber’s only catch of the night.

It was a different kind of game for Hood on the offensive side of the ball.   While the North team at times tried to sneak two quarterbacks into the game to try some kind of fancy play, the South couldn’t do that.   Hood must have thought he was in heaven.   So did the South coaching staff.  Hood, who was a backup to Dan Deely during the football season, was the only quarterback on the roster, so there was no worry, for that position at least, of getting the players enough playing time.  While the North had four quarterbacks and a running back throw passes during the night, Hood played the whole game and passed for 234 yards and three touchdowns.

Two of Hood’s touchdown passes were in the first half.   That was after they started the scoring on a two yard run Daniel Gresien of Casa Grande to take a 7-0 lead with 5:21 left in the first quarter.   The South went 60 yards on the drive  with running back Rancho Cotate Tanoa Peteti rushing for half the yards on three carries.  Peleti would end up being the game’s leading rushed going for 104 yards on twenty carries.

Hood threw his first touchdown pass on the next drive, which was a seven yard pass to Miles Gardea of Casa Grande to give the South a 14-0 lead with 1:19 left in the quarter.


Up to that point the North hadn’t gotten the memo about the high scoring first half.   They didn’t get a first down and gained a total of seven yards on the first two possessions.   The second possession almost was aborted before it began when there was a fumble on the kickoff after the first touchdown.   The play was like a scene from the NFL follies, with both teams having a shot at it before the North finally fell on it.

The North didn’t get a first down until the last minute of the first quarter.   That started a 65 yard drive that ended on a brilliant 21 yard  run by Logan Francavilla of Montgomery.  The run was like many of his runs during the football season in which he rushed for over 1,700 yards and 25 touchdowns in a 10-3 season.   He seemed down a couple of times, but kept breaking tackles and didn’t stop until he scored to make it 14-7 with 10:21 left in the first half.

That started a wild second quarter in which the two teams traded touchdowns.  The South followed with a scoring drive in which Hood completed three passes for 51 yards, including a 15 yard scoring strike to Travis McClintock of El Molino to make it 21-7 with 7:44 left in the quarter.

Ukiah’s Chandler Rickel returned the kickoff 74 yards to the South 11 yard line, which set up a Windsor combination of a touchdown.  The combination was quarterback Colin McAlvain to receiver Matt Basich.   The touchdown was a nine yard play and cut  the South lead to  21-14 with 6:47 left in the half.

You would have been given good odds if you bet that there would only be one more touchdown the rest of the game. The first half ended with back to back interceptions and a couple of shots at razzle dazzle kinds of plays that made some big yards but didn’t lead to points.

In the second half, outside the one scoring drive, the teams struggled to get first downs.   The North’s best drive started at the end of the third quarter, mainly on the running of Francavilla, who carried the ball four of five plays for 24 yards to move it to the South 44.  That drive was killed on the first play of the fourth quarter when a snap in shotgun formation went wild and the play ended up losing 24 yards.  That led to a punt and the South then went on a 12 play 72 yard drive that ate up over five minutes and ended with the game’s last touchdown.


It was a competitive game for the senior class of 2014, playing its last high school football game.   The crowd at Santa Rosa was a good one; well over half of the seats were taken.   The crowd was much bigger than the regular pre-league football games that feature games between the local team and teams from the East Bay.

The South team was run by the Rancho Cotate coaching staff led by Gehrig Hotaling while the North team was run by head coach John Antonio and the rest of the Piner staff.  Now they move on to get ready for the 2014 High School football season.    The earliest practice can begin is August 11th.   The first game day is August 29th.