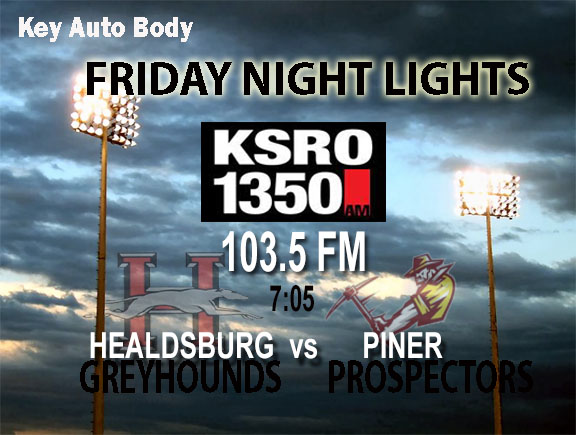 It has been building all season and now it is finally here.
Fort Bragg travels to St. Helena with both teams going into the game undefeated at 8-0.
A game like this, at least locally, doesn’t happen often. This is the second time in the Cal Preps era, which goes back to 2001, that two undefeated teams met this late in the season, and that game only involved one local team.


That game was in 2012 and that was  the North Coast Section Division 3 Semi Final game between Analy and El Cerrito, who were both 12-0. El Cerrito won that game 40-20.
One other game came close. That was in 2001 and that was also in the NCL world. It was between Middletown and Tomales, who were both 7-0. Middletown won 30-8 and decided the NCL III championship. The two teams were in different sections in the NCS playoffs and both took the championship.
The latest game, besides that, in which two undefeated teams met was in 2009 when Petaluma defeated Casa Grande 40-14. Both those teams were 4-0. Had the game been later in the season, they probably would have sill been undefeated. Neither team lost again until the playoffs.
One other game, at the same time, just missed and never had a chance for that undefeated showdown. That was the 2004 game between Montgomery and Cardinal Newman, who met the last game of the season. The only loss by either team was in the opening week by Cardinal Newman to Vintage 28-21. That was the famous game in which Marcus Ezeff caught a 50 yard touchdown pass with :04 left to give Montgomery a 20-17 win. Montgomery finished off its undefeated season by winning the Section championship. That season Cardinal Newman was on probation and it was its last game.
According to Cal Preps there are 1,061 football teams in the state and sixty two are undefeated. There is one other game that 8-0 vs. 8-0 go against each other. If all teams win this week, there would be two 9-0 vs. 9-0 meeting.
So this Fort Bragg-St. Helena game is not only a big one, it is a rare one.
WEEKEND SCHEDULE (ALL GAMES FRIDAY AT 7:30 UNLESS NOTED)
NORTH BAY LEAGUE
Montgomery at No. 1 Cardinal Newman…Friday 7 pm
CAL PREPS PROJECTION: Cardinal Newman by 45
No. 8 Windsor at No. 6 Maria Carrillo
CAL PREPS PROJECTION: Maria Carrillo by 12
Ukiah at No. 7 Rancho Cotate
CAL PREPS PROJECTION: Rancho Cotate by 42
Casa Grande at Santa Rosa
CAL PREPS PROJECTION: Casa Grande by 21
Cardinal Newman can sew up a NBL co-championship with a win and the sole championship with a win and a Maria Carrillo loss.
The biggest game is the one at Maria Carrillo. Both teams are in Division 2, so the game will make a difference on the seedings. Maria Carrillo has won three straight and a win would almost guarantee them at least one home game in the NCS playoffs.
Maria Carrillo is also still hoping for the school’s first football title. For that to happen they will need a loss by Cardinal Newman. Next week wraps up the regular season with both teams are on the road. Cardinal Newman is at Windsor, while Maria Carrillo travels to Ukiah.
Windsor is a bubble team as far as a home playoff game goes and already has a loss to Casa Grande, who is the other NBL Division 2 team that appears playoff bound. Maria Carrillo defeated Casa Grande last week.

Rancho Cotate is working on at least a No. 3 seed in the Division 3 playoffs.
SONOMA COUNTY LEAGUE
No. 2 Analy at Elsie Allen
CAL PREPS PROJECTION: Analy by 61
Piner at Healdsburg
CAL PREPS PROJECTION: Piner by 5
KSRO 1350 AM/103.5 FM GAME OF THE WEEK…PREGAME AT 7:05
Sonoma Valley vs. El Molino at Windsor High School
CAL PREPS PROJECTION: Sonoma Valley by 2
No. 2 Petaluma (BYE)
The expected Analy win over Elsie Allen will set up the SCL championship game next week against Petaluma.
Elsie Allen made some unwanted news this week. The Press Democrat reports that they fired Head Coach Bill Wright. Ex-football coach, current Varsity basketball coach and Athletic Director Madison Lott will be coaching the rest of the season.
It isn’t all bad news for Elsie Allen, it just seems that way. The Boys soccer team defeated Healdsburg 4-1 on Wednesday to clinch at tie for the SCL Boys championship. It is the first soccer title in Elsie Allen history.
Piner is a bubble team for the Division 3 playoffs and needs one win to qualify.
Because of a 3-2 record against Division 4 teams, Healdsburg has qualified for a playoff spot. Power ranking wise they need to improve to actually be picked.
NCL I
No. 4 Fort Bragg at No. 3 St. Helena
CAL PREPS PROJECTION: St. Helena by 4

Middletown at No. 9 Cloverdale
CAL PREPS PROJECTION: Cloverdale by 14
Willits at Lower Lake
CAL PREPS PROJECTION: Willits by 2
Kelseyville at Clear Lake
CAL PREPS PROJECTION: Kelseyville by 2
The league championship isn’t the only thing at stake these last two weeks. Seven of eight teams have either already qualified for a playoff spot or have a chance to.
Not only is the Fort Bragg-St. Helena game probably going to decide the NCL I championship, but the loser probably won’t get a home game in the first round of the North Coast Section Division 4 playoffs.
You could make a case Division 4 is the most power packed division in the North Coast Section. There are six undefeated teams in the North Coast Section and three of them are in Division 4. Neither of those undefeated teams are Marin Catholic or Cardinal Newman, who figure to be seeded No. 1 or No. 2.
The reason the word probably is used for the Fort Bragg-St. Helena game to decide the NCL I race is because Cloverdale is still a player. They have one league loss, that to St. Helena, and go to Fort Bragg to end the regular season next week. Cloverdale is in good shape for a top four seed in the Division 5 playoffs and in one projection is sitting at No. 1.
Middletown is a bubble team for a home game in the Division 5 playoffs. They need one more win to qualify and end the season with a home game with Clear Lake.
Lower Lake has qualified for the Division 4 playoffs, but is a bubble team in the power rankings.
Willits is just the opposite. They are in good shape in the power rankings in the Division 5 playoffs, but need one win to qualify. Next week they host St. Helena.
Clear Lake has already qualified for the Division 5 playoffs and look in good shape to get picked, that is of course the injury issues are taken care of after having to forfeit last week’s game against St. Helena.
BAY FOOTBALL
St. Vincent vs. Valley Christian at Dougherty Valley…Friday 7 pm
CAL PREPS PROJECTION: Valley Christian by 48
This game is a non-league game and has no bearing on the NCS playoffs.   It will be all or nothing when they go the road to meet Emery next week.
NCL III
Anderson Valley at Tomales…Friday 7 pm
Point Arena vs. Calistoga at Napa County Fairgrounds
Potter Valley at Rincon Valley Christian……Friday 7 pm
Laytonville at Upper Lake…Saturday 1 pm
Anderson Valley, Calistoga and Upper Lake are all 6-1 entering the last week of the season.
Upper Lake beat Anderson Valley who beat Calistoga who beat Upper Lake. None of the games were decided by less than 12 points.

Upper Lake looks like the biggest favorite meeting Laytonville who is 2-5.
Point Arena is 4-2 with the losses to the other two teams tied.
Tomales is 4-3.
JUNIOR COLLEGE
No. 15 SRJC at DeAnza…Saturday 1 pm
SRJC will try to bounce off the loss to San Francisco last week.
NBL GIRLS SOCCER
Maria Carrillo vs. Montgomery at Santa Rosa High School…THURSDAY 7 PM
This is an added note. This is a tie-breaker game for the automatic bid for the NCS playoffs. Both teams split during the regular season and ended tied for the North Bay League championship.
My email address is jacpasquini@comcast.net
Share