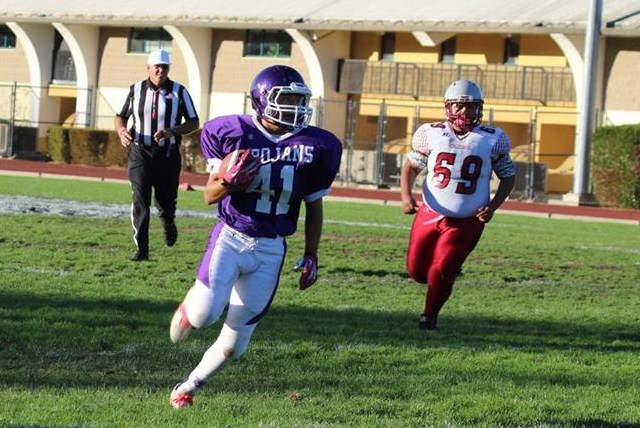 For the last four years the Sonoma County League has belonged to Analy.
The last time Analy lost an SCL game was on October 21st, 2011. That was a 10-9 to Casa Grande, who of course is no longer in the league. The following week Analy defeated Petaluma 41-37. Little did we know at the time that would start the streak. Analy has won twenty five straight Sonoma County League games and none of them has been as close as the game that started the streak. In most games, Analy has their starters out by the half and thinking about what they will be doing the rest of the weekend.
Two of the twenty five wins have been by less than 27 points. One was in 2012, when they defeated Piner 41-26. That game wasn’t as close as the score indicated as Analy had a 27-6 halftime lead.

The other game ended last year. That was against Petaluma and the final was 34-23 in a game that was as close as the score indicates.
In last season’s finale, not too many people outside of the Petaluma family expected it to be that close. You can say the same for this game.
If Analy gets the win they will not only make it four straight SCL championships, they will make it three times in four seasons that they officially finished the regular season undefeated. The only year they didn’t was 2013 when they went 9-1, with the only loss to Miramonte 25-13.
Analy has been good, but when they needed magic they got it. They actually did lose a game last season and it wasn’t a pretty loss, dropping a 55-14 decision to McClymonds. It was later ruled that McClymonds had used an illegal player, so that game was changed to an Analy win.
Analy’s record the last four seasons is 44-4 overall and 23-0 in SCL play. Three of the four losses have been in the NCS playoffs. Before they had lost those games, they had won two games to get to the semi-final game. Each of the playoff losses were on the road.
You can’t overestimate how important this game is with Petaluma. The obvious is it is for the fourth straight SCL championship. Almost as important, is what it will mean in the near future. The championship will probably get them a No. 2 seed, which would mean home games until the Section Championship game. The irony to that is that the home field isn’t. They have been using Rancho Cotate High as their home field this season, and those two teams could meet in that semi-final game. But that is still better than going on a road trip like they have done the last three NCS Semi-Final games.
A loss on Friday and there is no telling how far they would drop. Petaluma is also in Division 3 and the committee loves head to head. If Petaluma was to pull the upset, they would have a pretty strong case for being seeded higher than Analy.
Just like every other team, Analy is playing its last regular and league game of the season. You could make a case that its season actually starts now.
SCHEDULE (ALL GAMES FRIDAY AT 7:30 UNLESS NOTED)
NORTH BAY LEAGUE
No. 1 Cardinal Newman at No. 7 Windsor
CAL PREPS PROJECTION: Cardinal Newman by 18
No. 8 Maria Carrillo at Ukiah
CAL PREPS PROJECTION: Maria Carrillo by 23
No. 6 Rancho Cotate at Santa Rosa
CAL PREPS PROJECTION: Rancho Cotate by 44
Montgomery vs. Casa Grande at Petaluma High School
CAL PREPS PROJECTION: Casa Grande by 21
A win will give Cardinal Newman an undefeated league season and all but assure them of at least the No. 2 seed in the Division 4 playoffs. They may get that No. 2 seed even with a loss.
There is not much to lose for Windsor, because very few expect them to win. If they can pull off the upset, it would almost certainly assure them a home first round NCS playoff game.


Windsor, Maria Carrillo and Rancho Cotate go into the game tied for second in the NBL race. Windsor is the only one of the three not favored to win its game.
The Casa Grande field ready isn’t ready yet, so their game with Montgomery will be at Petaluma High School.
SONOMA COUNTY LEAGUE
No. 5 Petaluma vs. No. 2 Analy at Rancho Cotate High School
CAL PREPS PROJECTION: Analy by 12
Elsie Allen at Sonoma Valley
CAL PREPS PROJECTION: Sonoma Valley by 35
El Molino at No. 10 Piner…Saturday 2 pm
CAL PREPS PROJECTION: Piner by 20
Healdsburg BYE
It has been pretty much figured that Analy is going to win the SCL championship.
It was also pretty much figured that Petaluma with its undefeated league record would be the last hurdle.
So here we are.
Petaluma hasn’t lost a game since September 4th. That was Labor Day weekend. The loss made them 0-2 and the possibility of this game being for the SCL championship didn’t look so hot. Since then they have won seven straight, and outside the Piner game which they were fortunate to win, the wins have been one sided.
Petaluma has come a long way since 2010, when they went 1-9. Last year they came close to Analy. This time they will try to take the next step.
After a 0-7 start, Sonoma Valley is trying for its third straight win. If they get it they would be 3-3 in SCL play and make them eligible for a Division 3 playoff spot. If they apply and make it they would be in the range of Marin Catholic or Cardinal Newman in the first round.
NCL I
Cloverdale at No. 3 Fort Bragg
CAL PREPS PROJECTION: Fort Bragg by 11
No. 4 St. Helena at Willits
CAL PREPS PROJECTION: St. Helena by 29
No. 9 Middletown wins by forfeit over Clear Lake
Lower Lake at Kelseyville
CAL PREPS PROJECTION: Kelseyville by 7
A Fort Bragg win or a St. Helena loss wraps up a sole championship for Fort Bragg.
A Fort Bragg loss AND a St. Helena win and it’s a co-championship.
For the second time in three weeks Clear Lake is forfeiting its game. This week Middletown gets the win and ends the regular season 5-4. Clear Lake ends 2-8. Despite that record, because of a 2-2 record against Division 5 teams, they are still eligible for the playoffs. Hard to imagine them applying after forfeiting two of the last three games because injuries made them short on players.
The first forfeit by Clear Lake was against St. Helena two weeks ago, which was the Saints homecoming. This is homecoming No. 2 for Middletown. The first one against El Molino was cancelled because of the Valley Fire and now this. Just like St. Helena two weeks ago, they will have the JV game and do the homecoming celebration around that.
Middletown is looking pretty in decent shape for a first round home game in Division 5.
If Cloverdale doesn’t pull the upset of Fort Bragg, they could go in two weeks from a possible No. 1 to a first round road game in Division 5.
NCL III
REDWOOD BOWL
Anderson Valley at Upper Lake…Saturday 1 pm
This was always a planned game between the top two teams in the league with the league champion hosting.
Under the format, there was a good chance the tie-breaker was going to be used. With both teams finishing 7-1, it is for the No. 1 seed. Anderson Valley’s loss was to Upper Lake and that decides the home field advantage. Both teams will get league championship pennants.
Upper Lake went into last week tied with Anderson Valley and Calistoga for the top spot. Had Calistoga won its game against Tomales, Upper Lake wouldn’t have been in this game because they would have lost a three way tie-breaker because of numbers drawn at the beginning of the season. So Upper Lake owes Tomales for the home game.
The head to head game was played on October 10th at Upper Lake and the final was 34-22.
JUNIOR COLLEGE FOOTBALL
No. 14 SRJC (5-3) at Foothill (0-8)…Saturday 1 pm
After last week’s 10-8 win at De Anza, SRJC moved up one spot in the state rankings.
SRJC has won two of three Bay 6 Conference games and is in a three way tie for second, one game behind first place San Francisco.
One of the three teams they are tied with is Diablo Valley, who they finished the regular season against with its final home game on November 14th.
Diablo Valley hosts San Mateo, who is the other team involved in the three way tie. San Mateo ends the season with a home game with San Francisco.
If SRJC wins its last two games, the worst they would finish is a solo second place finish. The only other option with two wins would be a co-championship.
My email address is jacpasquini@comcast.net
Follow me at twitter @homer2612
Share