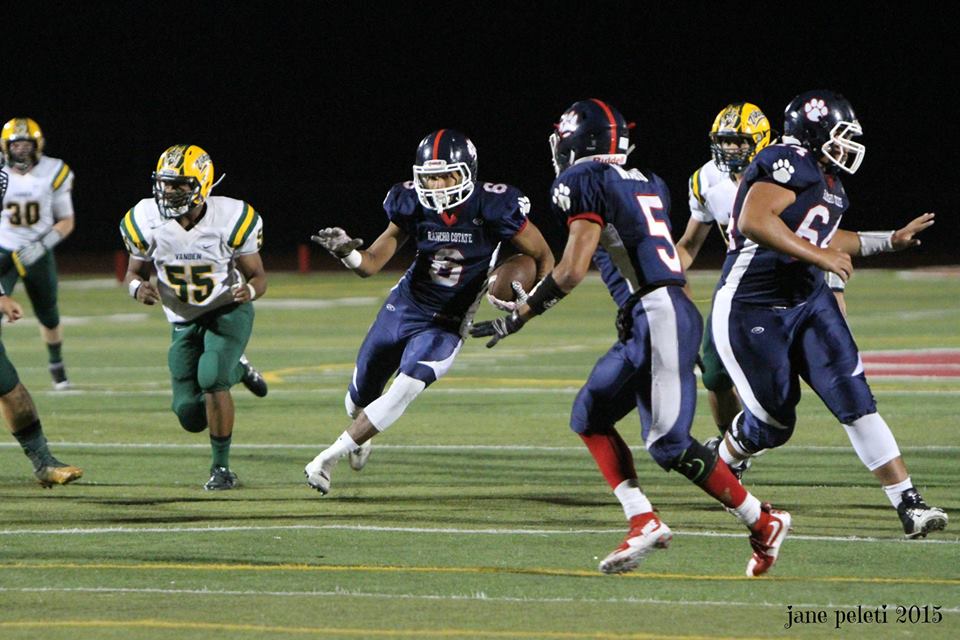 While in eight man football, all games are league, the eleven man football world has the first league game of the season this week. That is an NCL I game with No. 6 Fort Bragg hosting Clear Lake. This game was originally scheduled at Clear Lake, but because of the Valley Fire in Lake County, it has been moved to Fort Bragg.


Besides the Clear Lake-Fort Bragg game, the disaster in Lake County has altered the schedule in two of the four other games involving Lake County teams.
One game has been cancelled. That is the El Molino-Middletown game, which was schedule to be homecoming for Middletown. It is being reported that at least six Middletown players, along with three coaches have lost their homes. Cal Fire is reporting 585 homes have been lost.
Another game has been moved. The Rincon Valley Christian-Calistoga game was scheduled for Friday Night at the Napa County Fairgrounds in Calistoga. It will be played at Calistoga High School Friday at 4 pm.
The other two Lake County teams are on the road. Kelseyville is at South Fork and Lower Lake is at Elsie Allen. Both those games are scheduled for Friday Night.
Seven of the eight NBL teams are off this week.
SCHEDULE
No. 1 Rancho Cotate (2-0) at Antioch (3-0)…Friday 7:30
This is not only Rancho Cotate’s first road game, but based on the power rankings, its toughest opponent of the season so far. Actually Antioch’s power ranking is higher than Rancho Cotate’s, who is No. 1 in this area.
Neither team has been tested. The two teams have combined for five wins; the closest game is 25 points.
Antioch has defeated the equivalent in power rankings to Cardinal Newman, Windsor and Casa Grande.
Antioch is mainly a rushing machine, averaging one yard short of 400 yards a game. Most of that yardage belongs to junior running back Najee Harris, who is already over the 700 yard mark and has scored six touchdowns. Last season Harris rushed for 2,263 yards and twenty three touchdowns. He had a 371 yard rushing game and scored four touchdowns in four different games.
By twenty five students Antioch is a Division 1 team and finished 7-5 last season and won a playoff game. They have come from nowhere. Two years ago they went 1-9. Last year they finished 7-5 and won a playoff game.
No. 2 Analy (3-0) at Acalanes (1-2)…Friday 7 pm
Analy is making its only scheduled trip out of Sonoma County.
Acalanes started the season against Antioch (Rancho Cotate’s opponent) and lost 62-7.
Acalanes has won playoff games the last two seasons. Last season their season was ended at Analy in a wild 49-41 game.
No. 5 Santa Rosa (2-0) at Petaluma (1-2)…Friday 7:30
KSRO GAME OF THE WEEK….BROADCAST TIME 7:05
This is game number 80 between the two schools, which is by far the oldest series in the area. Santa Rosa leads the series 44-35. After going awhile without playing the game, the two have met the last six seasons. Petaluma won the first meeting in 2009. Santa Rosa won the next four, before Petaluma pulled off a 13-12 win last season.
Both teams are coming off promising weeks.
Santa Rosa is off to a promising start period, winning its first two games. Last week they dominated the second half in an impressive win over Fremont.
After a 0-2 start, Petaluma dominated most of the game in a 24-0 win over Terra Linda.
Clear Lake at No. 6 Fort Bragg (3-0) …Friday 7:30
The NCL I league season kicks off, and reminder the game has been changed to Fort Bragg.
Fort Bragg was co-champions with St. Helena last year and won the NCL I outright in 2012.
Clear Lake hasn’t won a league game since 2013.
No.10 Cloverdale (2-0) at Healdsburg (1-2)…Friday 7:30
Cloverdale has had two weeks off enjoying its 2-0 start. The Eagles are going for their first 3-0 start since 2009.
If you go by what Healdsburg has done this should be a close game. The most one sided game they have been involved in was a 55-42 loss to Drake in their opener. Since then they have split seven point games against NCL I teams.
OTHER GAMES
El Molino at Middletown (CANCELLED)
Chico at Sonoma Valley (0-3)…Friday 7 pm
Kelseyville (0-2) at South Fork (1-1)…Friday 7:30
Lower Lake (2-0) at Elsie Allen (0-2)…Friday 7:30
Piner (1-2) at Burton (SF) (0-2)…Saturday 1:30
Willits (2-0) at St. Vincent (1-2)…Saturday 2 pm
BYE: No. 3 Cardinal Newman (1-2), No. 4 St. Helena (3-0),No. 7 Maria Carrillo (1-2), No. 8 Windsor (2-1), Casa Grande (0-3), Montgomery (0-3), Ukiah (1-2)
NCL III (8 MAN)
Mendocino (1-1) at Anderson Valley (2-0)…Friday 7 pm
Rincon Valley Christian (0-1) vs. Calistoga (2-0) at Napa County Fairgrounds…Friday 7 pm
Tomales (2-0) at Point Arena (0-1)…Saturday 1 pm
Potter Valley (0-2) at Upper Lake(1-1)
Laytonville (0-2) BYE
JC FOOTBALL
Sacramento City (0-2) at SRJC (1-1)…SATURDAY 5 PM
KSRO 1350 AM, 103.5 FM…PREGAME AT 4:30
SRJC bounced off the opening season loss to San Joaquin Delta in a big way, and then held on.
SRJC led Butte 23-0 at the half, before taking a 23-20 win over Butte. Vincent Jefferies threw for 239 yards, two touchdowns and rushed for another.
Sacramento City has started the season with two losses.
Last season’s game was one of the best moments of the season for SRJC, as they rallied from a 31-18 deficit to take a 32-31 win.
My email address is jacpasquini@comcast.net
Share