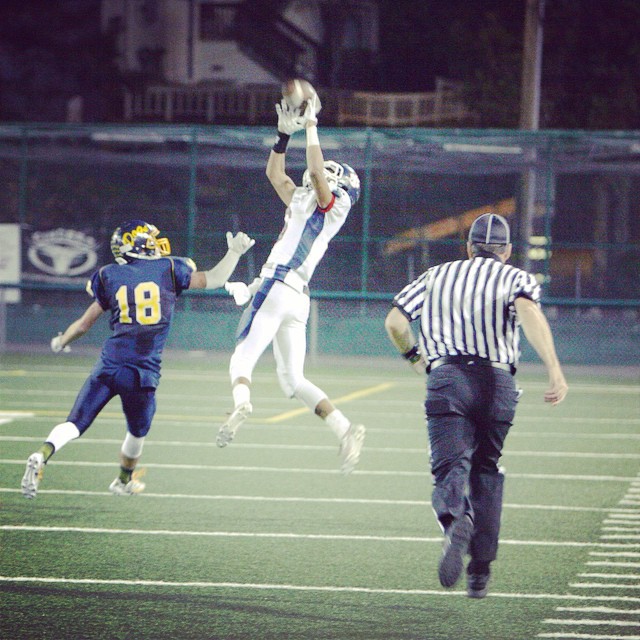 This is the last week before league play starts.
This is also the week that has the most Bye’s, with eight teams having the week off including four that are rated in the top ten.
FRIDAY SCHEDULE
No. 1 Analy (2-0) at No. 6 Montgomery (1-1):
YSN365.COM GAME OF THE WEEK
KSRO 1350 AM/103.5 FM GAME OF THE WEEK
This is the only game featuring two top YSN365.com teams.
Analy hasn’t played much football, at least there first string hasn’t and the whole team hasn’t played in two weeks after having a bye last week.
The first two games have been one sided, so one sided that the first string played the first half and that is it.
Still senior quarterback Will Smith is averaging over 200 yards passing and three touchdowns a game and running back Ja’Narrick James is averaging nearly 150 yards rushing and has scored five touchdowns.
The defense has done its part also or they wouldn’t be one sided games.   They have given up an average of ten points a game and have taken away an average of five turnovers.   All the points they have given up have been in the second half, in which they have had 40-0 and 34-0 halftime leads.
The sad part of this is that this is pretty much what Analy has to do if they are going to get a high seeding in the NCS Playoffs.   Even with the two one sided wins over two good programs form the North Bay League, they are not getting much respect in the regional polls.


The next two weeks are huge for Analy’s post season seeding.  They almost have to be 10-0 and then win the NCS Division 3 playoffs to qualify for the Nor Cal Championship game and that might not be enough.  In the power rankings listed by MaxPreps, Analy is ranked No. 4 for the Nor Cal Championship game.  Their power rankings won’t get a boost once SCL play starts.
Next week Analy travels to Oakland to meet McClymonds of Oakland who qualified for last years Nor Cal Championship game in Division 4.
Montgomery’s defense came up huge in its 18-7 win over Dublin.   The only touchdown for Dublin was a pick six which started the scoring in the first quarter.  Dublin went into the game 2-0 and averaged 35 points a game and was held to 70 yards of total offense.
This is the first home game for Montgomery and the first time the two teams have met since 2003.  Back then they met in a NCS Division 2 first round playoff game which Analy won 29-18.

American Canyon (2-1) at No. 4 Rancho Cotate (0-2):
Rancho Cotate only hopes that this game goes better than last season’s game between the two teams.
It almost has to.
American Canyon won last season’s game 56-12, leading 35-0 at the half.
This has the appearances of being a pretty exciting game.
In a 0-2 start, Rancho Cotate has been outscored by the average of 40-31.
In a 2-1 start American Canyon has been outscored by opponents by the average of 49-39.   A good chunk of those 49 points they have averaged giving up, came in the opening 63-16 loss to a good Paradise team.
Since then they have won games 50-49 and 52-35.  American River is averaging over 300 yards rushing.
Cooper Nicks will start at quarterback for Rancho Cotate.  Gunner Mefford recovering from a concussion hopes to be back for the league opener against Casa Grande next week.

St. Vincent (0-3) at No. 7 St. Helena (2-0):
St. Vincent is in unfamiliar territory losing as many games as they have in each of the last two seasons.   It is the first time they have started 0-3 since 2006.
The slow start is mainly because of an offense that is averaging nine points and 190 yards a game.
St. Helena has had two kinds of games in its start.   A defensive type of win over Healdsburg to open things and then a more wide open game in its home opener win over Winters .
Calling last week’s 33-20 win over Winters wide open is a bit of a stretch.   Winters scored two of its three touchdowns in the fourth quarter and St. Helena held Winters to 240 yards in total offense, while gaining over 400 yards.
St. Helena is trying to get off to at least a 3-0 start for the third time in four seasons.
This is an annual game won by St. Helena the last four years.  The last three were pre-league games.  Before that they were both in the NCL I South.

No. 9 Petaluma (2-1) at Jefferson (Daly City) (1-1):
The steady improvement continues for Petaluma as they have a good shot to go to 3-1.   That was after an impressive 35-15 win over Terra Linda in which Yuseph Kawasami rushed for 74 yards and his first two scores of the season.
Last week, Jefferson snapped an 18 game losing streak with a 37-27 win over Albany.   It was their first win since September 15th, 2012 when they edged Balboa 16-15.

No. 10 Middletown (1-1) at El Molino (2-1):
After the opening one sided loss to Salesian, Middletown looked more like the team we have been used to seeing the past few years as they shutout Healdsburg 12-0.  The shutout was in jeopardy in the fourth quarter when the defense stopped Healdsburg on a 4th and goal from the one.  Middletown led 6-0 at the time.
El Molino is coming off a 35-19 loss to Fort Bragg.  Running Back Eddie Taylor had his best game of the season rushing for 131 yards and two touchdowns.
A win would give El Molino as many wins as they had the last two seasons combined.
It is El Molino’s fourth straight game against an NCL I team.

Fremont (Oakland) (1-1) at Sonoma Valley (0-2):
Sonoma Valley needs one more game before league, after committing seven turnovers in a 54-13 loss to San Marin.    It wasn’t all bad news for Sonoma Valley in the game.  Running back Tristen Mertens did rush for 109 yards on ten carries and a score.
Fremont of Oakland being at .500 is not a surprise. Since going 9-3 in 2008 and outside a winless 2011, they have finished within two games of .500 in every other season.  In the winless 2011 they lost five games via forfeit.

Santa Rosa (0-2) at Deer Valley (Antioch) (2-0):
This doesn’t appear to be a normal Santa Rosa team, but still a win would be nice.   The Panthers have been in both games in a 0-2 start.
They meet a Deer Valley team that finished 11-2 last season.  One of the wins included a 50-16 win over Santa Rosa.
Both teams had a bye last week.

Sutter (3-0) at Ukiah (1-1):
After defeating Oakland 27-20 to get its record to .500, Ukiah meets back to back teams that are 3-0.
Sutter is a program who is used to winning.   Including the 3-0 start this season they are 35-6 over the past three plus seasons.  One of the losses was in the Division 2 Nor Cal Championship game to Marin Catholic 23-7.
Sutter has put up Analy type numbers outscoring opponents 154-21.   In the MaxPreps Power Rankings they are No. 1 for the Division 3 Nor Cal Championship  game.

Healdsburg (0-3) at Piedmont (2-0):
Healdsburg has come close, but hasn’t been able to get over the hump.   The defense has kept them in games, but the offense is having a hard time scoring.   Last week they didn’t score at all in a 12-0 loss to Middletown.
Piedmont hasn’t finished over .500 since 2008.   In 2012 they started 4-1, but lost five of six to finish that season 5-6.
Healdsburg has defeated Piedmont four straight seasons, including the only loss in the 4-1 start.

Upper Lake (0-3) at Lower Lake (1-1):
Upper Lake hasn’t won since 2012 and hasn’t scored this season.
Lower Lake is coming off a 27-18 win over Durham.   The defense returned two interceptions for touchdowns including a game changing 90 yard return by Isazah King.

CSD Fremont (3-0) at Calistoga (0-3):
Two years ago CSD Fremont tied St. Vincent for the NCL II/Bay Championship, last year Calistoga did the same thing.
The league has split so this is now a non-league game.

Burton (SF)(0-2) at Piner (1-2):
Piner hopes to keep the pattern going of Loss Win Loss for one more week.
Burton has score six points in its first two games.

Sacramento got into the win column last week scoring the winning touchdown with three minutes left in a 20-17 victory over Foothill.
SRJC defeated Sacramento last season 35-21.
My email address is jacpasquini@comcast.net
Share