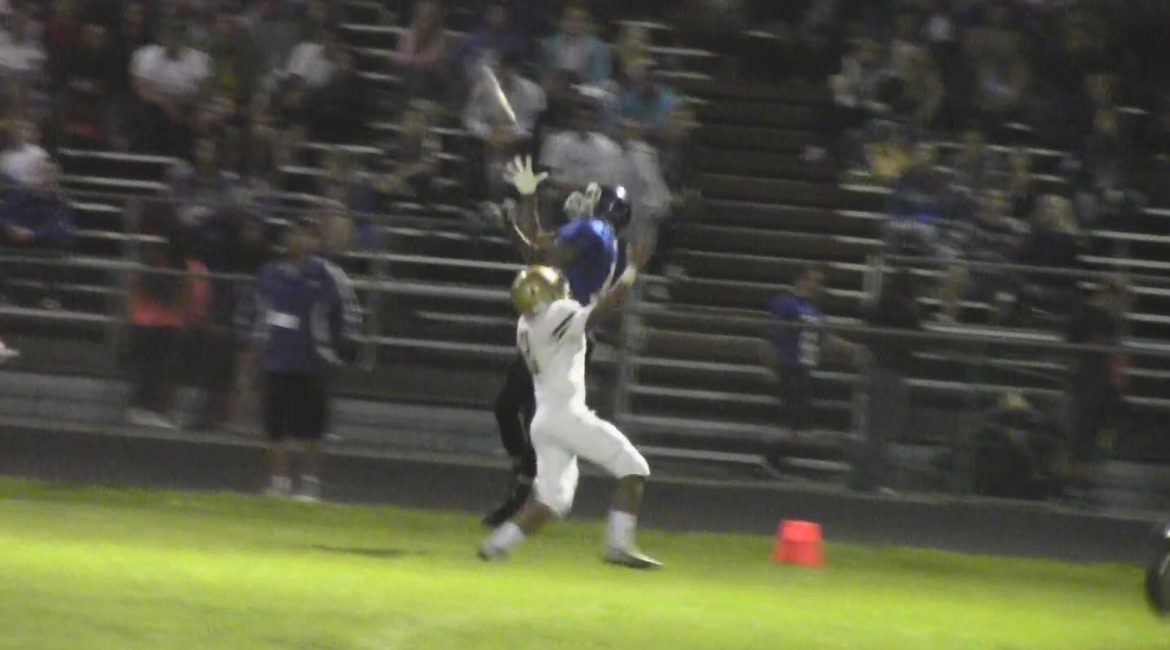 This might be hard to believe, but when the games are finished this weekend, so is half of the high school football season.  The league races may be just starting, but the actual football regular season is half over.
The league races have barely got a personality to them so far, with most of the big games yet to come.  Actually Analy, who is an overwhelming favorite to win its third straight SCL crown, plays its first league game this week as does all of the NCL II.
A new feature this week is the Cal Preps Projection of each game.  These are based on the power rankings that were posted earlier this week.
Looking at the projections, they don’t expect many close games.
NORTH BAY LEAGUE
Casa Grande (0-4, 0-1) at No. 2 Windsor (4-0, 1-0)
CAL PREPS PROJECTION:  Windsor by 32
Montgomery (2-2, 1-0) at No. 3 Rancho Cotate (2-2, 1-0)
YSN365.COM GAME OF THE WEEK
CAL PREPS PROJECTION:  Rancho Cotate by 21
No. 4 Cardinal Newman (2-2, 1-0) at No. 6 Maria Carrillo (2-2, 0-1)
CAL PREPS PROJECTION:  Cardinal Newman by 27
Ukiah (1-3, 0-1) at Santa Rosa (0-4, 0-1)
CAL PREPS PROJECTION:  Ukiah by 4
One game is predicted to be close.  That is between Ukiah and Santa Rosa.  This looks like the best chance for them to get a league win.   Ukiah has dominated the series recently winning five of the last six seasons.
Both teams have had one close game.  Ukiah won its close game, a 27-20 victory over Oakland.  Santa Rosa lost its 13-12 to Petaluma.
The other games, if you believe the Cal Prep projections are on upset alert.
Some projecitons are more believable than others.
Record wise, the most believable one is a role reversal.
Most years, even when they met back in the SCL days, when Casa Grande and Windsor met, Casa Grande was the big favorite and Casa Grande usually won.
One of the few exceptions was in 2011 when Windsor, during its undefeated season, took a 14-7 win.  It is believed to be the only time that Windsor has defeated Casa Grande.
Windsor is off to the 2011 kind of start again.  They are second in the NBL averaging 37 points a game and first in giving up 12.
The numbers for Casa Grande are just the opposite and with what this program has been, is as shocking as it is hard to believe.  In the run to the North Bay League championship last season, they scored more points, in every game  but one, than they have scored this whole season.
If you look at just the numbers you might be worried that Windsor would be overlooking this game.  With the history of the two programs that is doubtful.
In the other two games, calling one an upset alert is easier to buy into then the other one.
Maria Carrillo hasn’t defeated Cardinal Newman since 2005.   That was one of Maria Carrillo’s best seasons in its history.  The quarterback was Adam Froman, who led Maria Carrillo to an 8-5 record.  Even in a season that had a 37-30 win over Cardinal Newman during the regular season, they couldn’t get out of their shadow.   They met in the NCS Championship game with Cardinal Newman taking a 21-0 win.  That started a streak of nine straight wins for Cardinal Newman over Maria Carrillo.  Eight of the wins have been by 21 or more.
Going into this game both teams are 2-2 overall.   There has been an average of 67 points scored in a Cardinal Newman game this season (they have outscored opponents 35-32).   That is second in the NBL behind Rancho Cotate whose games are averaging 69.   Maria Carrillo games are averaging 43 which is the lowest in the league.
That should tell you what kind of game Maria Carrillo wants to play to pull off the upset.
The game that is hard to buy into an upset alert status is Montgomery at Rancho Cotate.  It is the only game in the league between first week winners.


Montgomery is still trying to prove that they are back among the elite teams in the area.  That cause was hurt by the one sided losses to Napa and Analy.
Rancho Cotate leads the NBL averaging 41 points a game and with the schedule they have had that is something to pump your chest out about.   The only game that didn’t hit the 40 point mark is the 33-28 loss to Vanden, who is 3-1 on the season.
Last season, Montgomery defeated Rancho Cotate 28-3.   Rancho Cotate had won five of the six games before that.

SONOMA COUNTY LEAGUE
Sonoma Valley (1-3, 1-0) at No. 1 Analy (3-1, 0-0)
CAL PREPS PROJECTION:  Analy by 48
Piner (3-2, 1-0) at Petaluma (3-2, 0-1)
KSRO 1350 AM…103.5 FM
CAL PREPS PROJECTION:  Petaluma by 5
Healdsburg (0-5, 0-1) at Elsie Allen (0-5, 0-1)
CAL PREPS PROJECTION:  Healdsburg by 38
El Molino (3-2, 1-0) BYE
Everyone in the SCL has to meet Analy and it is not the most happy of prospects.
Playing Analy this week is terrible timing.    They have been sitting on the loss to McClymonds for a week and will be ready to take it out on somebody.
That is what Sonoma Valley faces.   The week that Analy was losing its game, Sonoma Valley was winning its first, using an impressive defensive performance in defeating Petaluma 13-5.    Sonoma Valley, who gave up an average of 33 points a game coming in, held Petaluma to just over 200 yards in total offense and forced six turnovers.
One other note on last week’s game and then we will let it go.   The 14 points Analy scored was the first time they haven’t scored at least 20 since the last game of the 2011 season when they lost an NCS playoff game to Novato 34-16.  Since then Analy is 26-4 overall and has won twelve straight SCL games and back to back SCL championships.
Most think the best battle in the SCL is for second place and that race has a defining game when Piner travels to Petaluma.   Both were NCS playoff teams last season and both are hoping to be one this season.
As for the battle for second, after the loss to Sonoma Valley last week, this appears to be a must win for Petaluma.    It is also a big game for the program, as they are hoping to finish over .500 for the first time since 2009.
These are  two teams that do things differently on offense.   Piner is averaging over 200 yards a game passing, while Petaluma is averaging the same rushing.
The teams are the top two in the league in points allowed a game.
All the numbers point to this being a good game.  Since coming into the league two seasons ago, the two teams have split home wins.
The game between Healdsburg and Elsie Allen is between two teams looking for their first win of the season.   The teams that Healdsburg  has lost to have a combined record of 17-5.  Two of the losses were by three points.

NCL I
Lower Lake (2-2, 0-1) at No. 7 St. Helena (4-0, 1-0)
CAL PREPS PROJECTION:  St. Helena by 35
No. 8 Middletown (3-1, 1-0) at No. 10 Fort Bragg (3-1, 1-0)
CAL PREPS PROJECTION:  Middletown by 15
Kelseyville (3-1, 0-1) at No. 9 Cloverdale (3-1, 1-0)
CAL PREPS PROJECTION:  Cloverdale by 14
Clear Lake (3-1, 0-1) at Willits (2-2, 0-1)
CAL PREPS PROJECTION:  Willits by 1
The league will gets a test on how balanced it is as the two teams that played the closest games last week meet the two league favorites.
That is Fort Bragg and Lower Lake.   Fort Bragg rallied from a 21-7 deficit to edge Lower Lake 29-28.
The game between Middletown and Fort Bragg is the only game between teams that won their first league game.   It matches the league’s No. 1 offense and No. 2 defense.
Fort Bragg is averaging over 38 points a game.   The 29 they scored last week was the lowest output of the season.
Middletown is giving up 11, most of that was in the opener which they lost to Salesian 33-7.  Since then they have given up 13.
St. Helena had its best game of the season last week with a 44-7 win over Kelseyville who went into the game 3-0.
Lower Lake has scored at least twenty points since an opening week loss to El Molino 28-6.
The timing of this game might be good for the underdogs.   The two favorites might be looking past this game to next week, when they meet at St. Helena.
Cloverdale is playing its first home game.   In its three wins they have given up a combined seven points.
Kelseyville tries to rebound after the loss to St. Helena.  They had two straight shutouts going into that game, which got out of hand in the second half.
Clear Lake is another team trying to rebound after a 3-0 start.  They had given up 13 points in the three wins before getting shutout by Cloverdale 26-0.
Willits is coming off a 0-10 season and got a bad draw opening the league season against Middletown.

NCL II (Both games Saturday)
Calistoga (0-4) at St. Vincent (0-4)
CAL PREPS PROJECTION:  St. Vincent by 28
Tomales (3-1) at Upper Lake (0-4)
CAL PREPS PROJECTION:  Tomales by 28
The new version of the NCL II starts league play a week later than the rest.
Each team will meet each other twice in a home and home set up.
Tomales is the only team that won a game during pre-league play.
St. Vincent and Calistoga tied for the league crown last season which was then the NCL II-Bay League.  That was decided on the last regular season game of the year which St. Vincent won 27-14.
Neither team has won since.

JC FOOTBALL
Sequioas (1-2) at No. 4 SRJC (4-0)
The way these two teams have played you can almost be guaranteed a close game.    The difference in the records is that SRJC wins its close games.
In the opening game Sequioas rallied from a 21-3 fourth quarter deficit to take a 24-21 lead before losing 27-24 to Foothill in overtime.
In game two, they fell behind 20-0 in the first quarter before losing to Feather River 45-41.
In game three, after three lead changes, they edged De Anza 16-13 scoring the winning touchdown with :22 left.
In the loss to Feather River, Quarterback Raul Alverez threw sixty passes.   He completed thirty six of them for 544 yards and five touchdowns.   He also threw five interceptions.
My email address is jacpasquini@comcast.net
Share