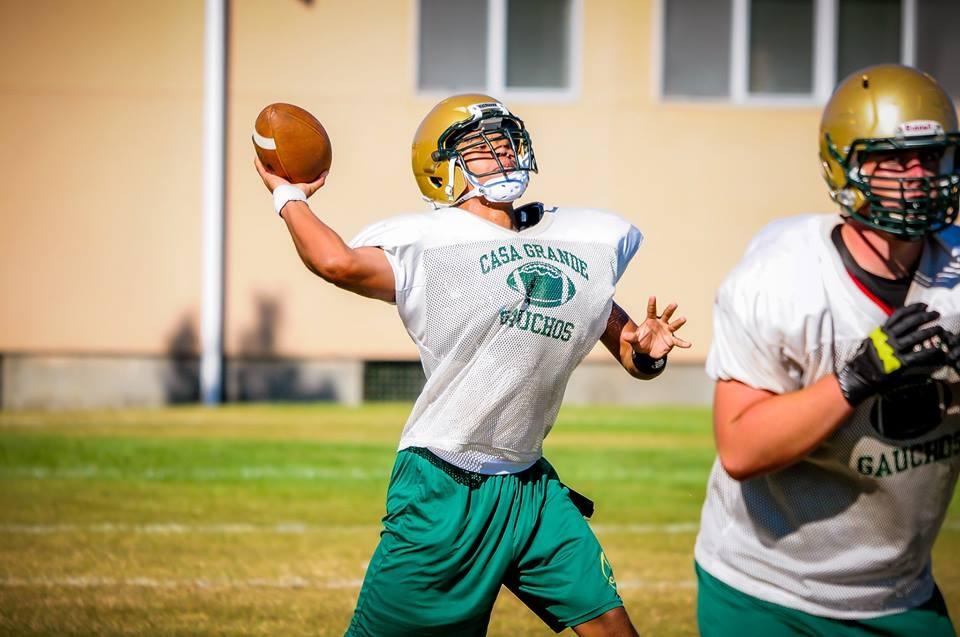 For the time being we forget about pre-league games that just finished and the playoffs and all of that.

The league races are now at the top of the agenda.

In the College ranks, SRJC begins the start of a brutal schedule.

YSN365.COM PLAYER OF THE WEEK

Dylan Alvardo of Calistoga…Rushed for a school record 270 yards on 29 carries and scored three touchdowns in its league opening win 32-14 over defending co-champion CSD of Fremont.   Alvardo has rushed for nearly 700 yards on the season and has gained at least 180 yards in three of the four games.   It was his second three touchdown game.

Before realignment, the Montgomery-Casa Grande was one of the most anticipated pre-league games.  The two teams played yearly beginning in 2003.  That year Casa Grande scored the winning touchdown in the last thirty seconds to take a 28-27 win in a game that was considered at the time a major upset.   You can say that game was when Casa Grande became the Casa Grande we know about now.

Casa Grande hasn’t lost a regular season game to Montgomery since 2005.  Montgomery has bragging rights for playoff games, winning two of three, which includes the NCS Championship Game in 2004.

Since Montgomery’s last regular season win, which was also in 2004, the teams tied twice, including a rare scoreless game in 2008.

A win for Montgomery will give them as many wins as they have had in four of the last five season.

There is no question this is the toughest test of the season for the Vikings. The teams they has beaten has a combined three wins.  Two of those belong to Dublin, who they defeated 50-18.  The two wins by Dublin are against teams with a combined record of 0-7.

Of the other three games only one would be considered a major upset.   That would be in Ukiah where theWildcats host Cardinal Newman.

Both teams had last week off, which means Cardinal Newman has had two weeks to sit on its last game which was a 35-7 loss to El Cerrito, its first loss of the season.

Ukiah has enjoyed the last two weeks with the last memory is a 19-0 win over Oakland.   Ukiah has won two straight after starting the season with a 28-6 loss to Piner.  The two teams that Ukiah has defeated have a combined record of 1-5.

At 2-1, Ukiah has won more games than it did all last year.

The other two games, no matter which way they go will not be considered an upset.

The rankings from YSN365.com involving Windsor and Rancho Cotate seem backward.  It most current rankings they are.

In all other rankings, Windsor hasn’t gotten much respect for its 2-1 start. Windsor is also 2-1.   The lone loss was to undefeated Benicia 34-27.  One of Benicia’s four wins was over Maria Carrillo 35-7.

The seven point loss to Benicia is the most one sided game of the three games Windsor has played, although they did last week’s game against Washington of Fremont 29-6 going into the fourth quarter.

Quarterback Colin McAlvain has passed for over 700 yards and five touchdowns.

In last year’s opener, Rancho Cotate defeated Windsor 43-9.  It was Windsor’s first game as a member of the NBL.

Defending champion Rancho Cotate is coming off a painful 56-12 loss to American Canyon.   That kind of score you are used to seeing Rancho Cotate on winning side of. It was the first loss for the Cougars after a 2-0 start.

The homecoming season starts at Santa Rosa when they meet Maria Carrillo.

The teams are coming into the game in a different frame of mind.

Maria Carrillo is coming off a nice win on the road against Alhambra 42-21.  It was the second loss for Alhambra, the other was at Rancho Cotate 21-14.  It was Maria Carrillo’s first win of the season and they go into league play the only NBL team under .500 at 1-2.

Santa Rosa got a bit of reality check last week.  After starting 2-0, they were defeated by Deer Valley 50-16.   If the Panthers do go to the NCS Division 1 playoffs they could see Deer Valley again.  They are the No. 2 Division 1 team in Northern California (you can probably guess who is No. 1).

This is exactly how the pre-league played out for both teams last year before meeting each other in the NBL opener.  Maria Carrillo won that game 50-34.

This was a better pre-league for the SCL than last season.  Going into league play last year three teams were winless, and the league had a combined 9-19 record.

This year every team no teams are winless and all but one has a better record this season and are a combined 14-13.

The only team that doesn’t have a better record than last year is defending champion Analy.   Of course they couldn’t have been better than the 4-0 start last season.

The Tigers came close to matching that. They went 3-1 with the lone loss to Miramonte 25-13.

Analy travels to Sonoma Valley in a matchup of the only two league teams in the YSN365.com top ten.

Sonoma Valley has had two weeks off since losing to San Marin 47-19 which ended a 2-0 start.

Analy has dominated this series the last three seasons, winning all three games by at least 29 points.   Last year they took a 63-20 win.

The winner of Saturday’s Petaluma and Piner will be over .500.   That doesn’t sound like much, but it has been a while either team can say that this late in the season.

For Piner it is even longer going back to 2003.  That was also the last season they made the NCS playoffs when they went 7-5.

The defending champion is Fort Bragg.

Middletown is the only NCL team ranked in the YSN365.com Top Ten.

A win by Kelseyville will give them the most wins in a season since 2007 when they went 7-4.

Kelseyville is meeting a St. Helena team who is 17-1 in league play the last three seasons.

Kelseyville isn’t the only NCL I team who is trying to turn things around.  This is the third time in ten years that Lower Lake has had more than one win.

The Emery-Calistoga game is between two teams that had a combined one win two years ago.

They meet an Emery team that is in its third season of its third attempt at fielding a football team.  In its first four seasons, with the first one in 2001, they were a combined 3-34.  They took a big step up last season going 4-5.

This is the first time they have played three straight seasons.

This is the start of a stretch for SRJC of three straight home games against teams that are currently 3-0.

American River and SRJC has had a similar type of season.  In the opener the games were one sided and in each of the last two games they rallied in the second half.

American River and SRJC has one common opponent and that is Sacramento.  Two weeks ago American River fell behind 7-0 in the first quarter, before taking a 34-7 win.

Last week SRJC fell behind Sacramento 21-7 in the first half, before taking a 35-21 win

Stats wise, American River has been dominate.  They have averaged more yards a game on offense then they have given up on defense in the three game combined.  The most yards they have given up is 139, which was in the opener in which they defeated Monterey 40-2.

El Molino Grad Mike Pierson will start his second straight game, taking David Sowards place who separated a shoulder two weeks ago and is expect out about another month.  Last week Pierson was 24 of 40 for 355 yards and three touchdowns.