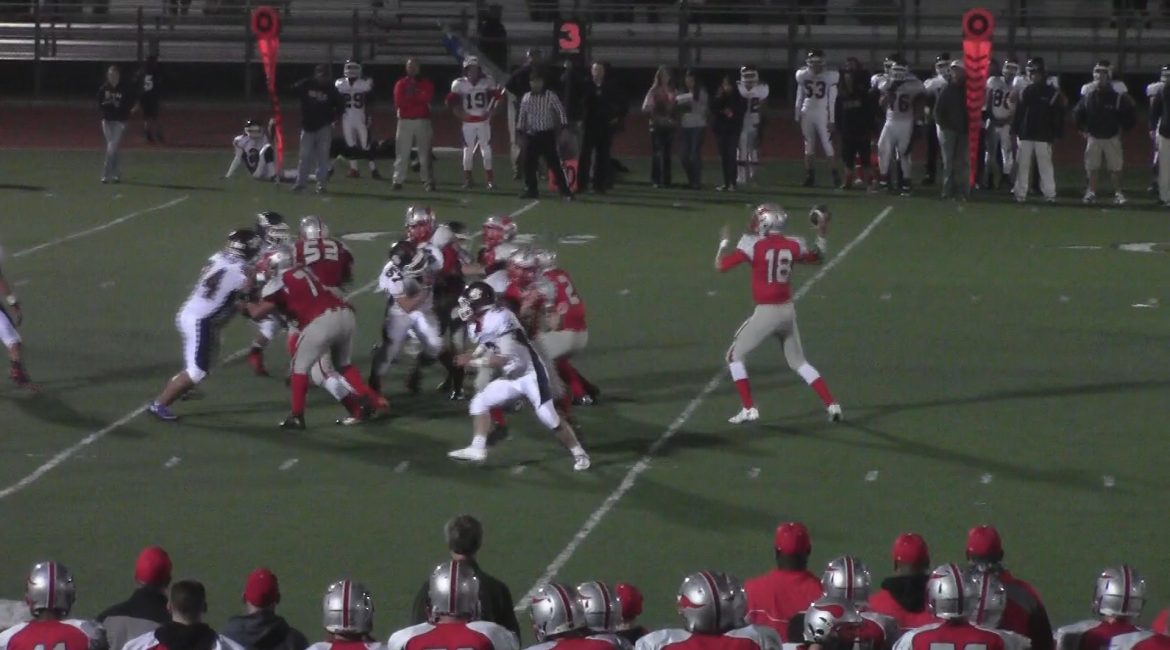 The high school league races move past the halfway point the same week that SRJC opens its conference race.  SRJC is starting conference play with a home game against the No. 1 team in the state.

Kevin Duty, Kelseyville…Ran for 266 yards, four touchdowns and two 2-point conversion.  It wasn’t enough as they lost to Fort Bragg 44-42.  Fort Bragg running back rushed for 226 yards and three touchdowns in the same game.

KSRO GAME OF THE WEEK

This is the earliest that there has only been one team left undefeated in NBL play since 2007 when Cardinal Newman was the only undefeated team.   It turned out that season, although we didn’t know it then, Cardinal Newman’s league opening 29-10 win over Rancho Cotate was the equivalent to the league championship game, as both teams won out the rest of the way.  Since then the showdown games came in the fourth week or later, with the last three games being between Rancho Cotate and Cardinal Newman, Rancho Cotate winning two of them.

There is still plenty of football left, but that is the way this year is starting to play out.  We might look back on it and think Casa Grande’s opening league 30-12 win over Montgomery, will turn out to be the league championship game.  That is assuming that both win out.

Casa Grande still has three games against teams that go into the week with one loss, starting this week when they host Rancho Cotate in the Gaucho’s homecoming game.

Rancho Cotate is the guest of a homecoming celebration for the second straight week and they hope it goes better than the first one, which was a 28-3 loss to Montgomery.   The loss snapped a Cougar eleven game league winning streak.  The last loss was to Cardinal Newman 28-7 on October 28th, 2011.

Rancho Cotate hasn’t lost two league games in a season since 2009.  Since then they are 21-2 in league play.

Rancho Cotate is one of four teams with one league loss that is waiting for Casa Grande to fall and throw the race into a mess.

The number of those two teams will be down to at least three late Friday Night because two of them are meeting when Maria Carrillo travels to Cardinal Newman.

It is a quick turnaround for Maria Carrillo who is coming off its first league loss.  Four turnovers doomed them in a 37-18 loss to Casa Grande, which also snapped a three game winning streak.

Cardinal Newman bounced back from the overtime loss to Montgomery with a 45-0 win over Santa Rosa.  Craig Lucey had a season high 112 yards rushing and two touchdowns.

Cardinal Newman hasn’t lost more than one league game in a season since 2002.   Paul Cronin’s first year is coach was in 2003.  His league record counting this season is 64-8.

Montgomery is one of several teams that is hoping one loss will win a league championship.    They have met three of the four teams that have one league loss and survived going 2-1.  A win over Ukiah will give them win number six a mark they have reached twice since 2007 when they went 6-4-1.

Santa Rosa and Windsor are trying to make something out of their seasons.  Neither team will win a league championship, but both teams want to make the NCS playoffs.

Santa Rosa is already eligible because of its 1-1 record against Division 1 schools.  Still they would like to finish strong to have the looks of a playoff team.

It is a different story for Windsor who needs wins.  They are exactly .500 overall, 1-2 in league play and 2-2 against Division 2 teams.   They need a .500 finish in one of those categories to be eligible for the NCS playoffs.

One of the great scenes in local sports is the Apple Bowl between El Molino and Analy, who meet for the 49th time with Analy leading the overall series 25-23.

Recently the game hasn’t lived up to the hype, although El Molino won two thrillers in 2008 and 2010.  Analy’s wins since 2007 have been pretty one sided and with the recent results it looks like this game is heading in that direction.

In the power rankings Analy is No. 4 in Division 3, which is the bubble for two home games when playoff time comes.  An SCL win isn’t going to help them that much in the power rankings, so if things stay the way they are, they will be keeping fingers cross when NCS playoffs are announced.

Of course El Molino would love to take a chunk out of Analy’s season with what would be a shocking win.   That would also throw the SCL race into a mess with El Molino and Analy tied for first with at least one other team.

That one other team would be the winner of the Healdsburg-Sonoma Valley game.  Both teams can also get the magic win number five which would make them eligible for post-season play.

Healdsburg is on the bubble for the No. 4 seed in the Division 4 playoffs.   It doesn’t look like Sonoma Valley will get a home game in the power packed Division 3.

Sonoma Valley defeated Healdsburg last season 28-14.  It was the Dragon’s first win over the Hounds since 2006, snapping a five game losing streak.

Petaluma needs to win two of three to be eligible for the Division 3 playoffs.  They end the season against Analy and Sonoma Valley.

As you can tell by the Cal Prep projection, Clear Lake isn’t expected to be undefeated after its trip to St. Helena on Friday.   Either way Clear Lake is one win away from assuring the team’s first over .500 finish since 2009.

Middletown defense still hasn’t given up a score since opening week.  St. Helena scored a touchdown last week on a kickoff return ,which was the last score in a 21-6 Middletown win.

Middletown meets a Kelseyville team has lost three straight after a 3-0 start.  The last two games they have lost by a combined three points.

A win by Cloverdale will not only give them a three game winning streak, but give them more wins than the last three years combined.

In what is some strange scheduling, Calistoga has its second bye in three weeks.

Three teams try to stay one game back in the loss column, with two of them meeting each other.  That is Emery and St. Vincent.  Emery’s lone loss is to Calistoga, which was their first game of league play.

St. Vincent dropped their first league game in its last game two weeks ago to CSD Fremont 28-21.  St. Vincent rallied from a 20-7 halftime deficit to take a 21-20 lead.  CSD Fremont then scored the winning touchdown with two minutes left.

St. Vincent defense has given up a league low 10.8 points a game.  It has been a team effort.   They are averaging nearly two sacks a game and six different players have at least one.  They also are averaging over an interception a game and at least six players have one of those.  Chris Faulkner and Derek Murphy are each list.   Murphy is also the team’s leading rusher and leads the team in touchdowns.

The beginning of league play and you figured that SRJC would meet the No.1 team in the state during league play, it was just thought it wouldn’t come this soon.  It was thought as little as two weeks ago that the No. 1 meeting would be later down the road against San Francisco.  But San Francisco lost its first game to American River 34-13 and Butte takes over as No. 1.

It isn’t like Butte didn’t have a No. 1 resume.  They have scored at least 40 points in each game and have hit the 60 point mark twice.

Five of the six teams in the Nor Cal league are ranked in the top 20 with three of them in the top seven.