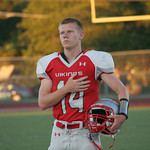 We go into the second week of league play with an added feature to the preview.  Each game has a Cal Prep Projection.  They are based on computer rankings, so take them anyway you want.

Dylan Alverado, Calistoga…This was warned about in the Friday neat package.  How can he not be?

In the last two weeks, both being named YSN365.com player of the week, Alverado has 57 carries—677 yards—10 touchdowns.

Santa Rosa’s 2-0 start seems like a long time ago after two one sided losses.  It doesn’t expect to get much better as Casa Grande comes to play the third of four straight home games for the Panthers.

Casa Grande quarterback JuJuan Lawson has gone over the 1,000 yard mark in combined yardage (passing and rushing).   He has thrown and rushed for four touchdowns each.

One of the top rivalries in the area resumes when Cardinal Newman hosts Montgomery.   The game will be broadcast on KSRO 1350 AM at 6:30.

The home team has only won once in the series since 2000.  That was two years ago by Cardinal Newman in a thriller 41-34.  That game wasn’t supposed to be much.  Montgomery was 2-5 going in while Cardinal Newman was 5-0-1.

After a non-league schedule that didn’t push Montgomery much, the league schedule is making up for things.   After the trip to Casa Grande last week and Cardinal Newman this week, they host Rancho Cotate next week.

The two teams have had similar seasons.   Three one sided wins and a one sided loss.

RJ Flores will start at quarterback for Montgomery replacing Elijah Hicks who separated a shoulder in last week’s loss to Casa Grande.   Flores came in the second quarter and went 7-13 for 99 yards most of the on a 59 yard pass to Etienna Ezeff which set up Montgomery’s second touchdown.

The last regular season game that KSRO broadcast the last time around was the famous Marcus Ezeff game in 2004.

In the power rankings for Division 2, Montgomery, Maria Carrillo and Windsor are 7-8-9.  You need to be a top eight to get a home game.

Maria Carrillo is thinking of bigger things.  They are trying to go 2-0 in league before they have the top three lined up the following three weeks.

Windsor is trying to rebound after the slip against Rancho Cotate last week.

Both Maria Carrillo and Windsor are Division 2 teams so that carries some weight in the NCS playoff race.

It’s a must win for Windsor if they are going to be considered a contender for the NBL race.

Piner gave Analy its closest league game last season.  The final was 41-26 in a game that Analy was never in danger of losing.

Analy picked up in SCL play right from where they left off last season with a 44-14 win over Sonoma Valley.   Junior Will Smith was 18-25 for 185 yards and Ja’Narrick James added four first half touchdowns.

Of course to stay over .500 they are going to have to pull up quite an upset.  As you can tell from the Cal Preps projection, that is not expected.

Healdsburg’s record changed again because of a game that wasn’t played last week.  The forfeit win over Middletown was overturned and the result is now what happened on the field which was a 35-0 Middletown win.

The Healdsburg-Petaluma game is big moment for each team.

A Healdsburg win will put them within one game of being eligible for the NCS Division 4 playoffs.  It would also put them at 2-0 in SCL play going into next week’s home game with Analy.

Healdsburg does have a back-up plan if they should lose.  They are 2-1 in games against Division 4 teams.  They end the season with two games against teams from Division 4 (Piner and El Molino).  A split of those two games would make them eligible, no matter what happens between now and then.

Petaluma, who is in Division 3, doesn’t have as much of a backup if they lose this game.  First of all they would have to win three of four to finish the season to finish .500.

The Trojans are 1-1 against Division 3 teams and have three left against Elsie Allen, Analy and Sonoma Valley.  Those three games end the season.

This is also a big night for El Molino and Elsie Allen.  This is probably each team’s best chance to get a league victory.  It is the first league game for El Molino, who won last year’s meeting 42-0.

Cal Preps Projections doesn’t expect this to be much of a week.

The defending champion does meet the highest ranked team in the Fort Bragg-Middletown game.

Running back Zach Smith, who rushed for over 1,800 yards last year from Fort Bragg, returned from an injury and rushed for 292 and four touchdowns in last week’s 33-6 win over Lower Lake.  Fort Bragg is 2-0 in games that he has played in.

St. Helena running back Sebastian Segura has rushed for 400 yards over the last two games including going for 196 and three touchdowns in the 42-12 win over previously undefeated Kelseyville.

Next week:  St. Helena at Middletown, so both teams can’t be caught looking ahead

The St. Vincent –CSD Fremont game is between teams that were co-champions last season.

Tomales is playing its first league game.  The Braves gets credit for a forfeit win over Castlemont, a game they lost 6-0.

Tomales has scored 94 points in its two wins and none in its two losses.

Calistoga is one of the few teams that only play nine games.  So even if they lose out they have qualified for the NCS Division 5 playoffs.

Special Broadcast of this game on KSRO 1350 AM with the pregame beginning at 4:35.

The game will also be broadcast on KBBF 89.1 FM

This is a statement game for each team.

Have to see what kind of statement remains to be seen.

It wasn’t as bad for SRJC, although it was close.  After taking a 7-0 lead over No. 5 American River, they gave up 48 straight points before losing 55-21.

Mike Pierson will start his third game since replacing David Sowards who separated his shoulder.   After throwing for 355 yards in a 35-21 win at Sacramento, he threw five interceptions last week.

This is SRJC’s annual Clo Classic.  There will be several events and the proceeds go to St. Joseph Health and their local programs and COTS Committee on the Shelterless.  The game has raised over $75,000 over the last decade.