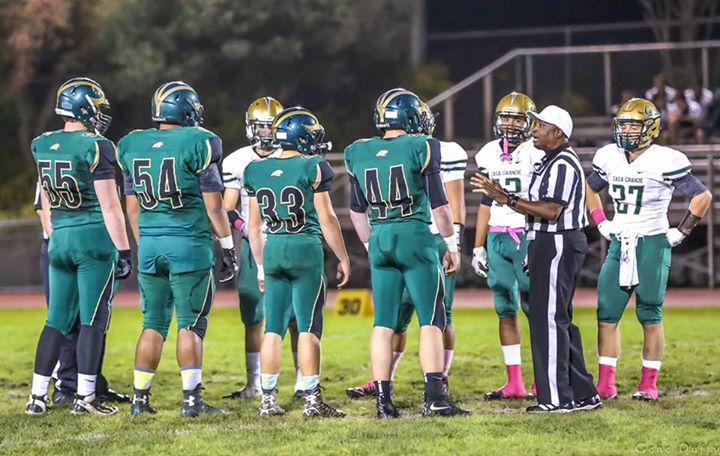 The North Coast Section playoffs are in some ways like the regular season.
Most of the early round games games are pretty one sided as you wait for the heavyweight showdowns.
Last season for example, in the five Divisions combined there were thirty seven first round games. Only eight were decided by fourteen points or less, with four in Division 5. Winning a close first round game usually isn’t good news for you the next week. The teams with the close wins went 2-6 in round two and the two winners lost one sided games in the semi-final round.

For the most part, the playoffs go to form. Last season the double digit seeds went 4-28 in Round One. One of those teams won in Round 2.
The numbers don’t get much better for the local teams as far as winning NCS championships. The count is now seven years since the North Bay and East Bay have combined in the playoffs. Out of twenty eight playoffs (not counting Division 1 that is dominated by De La Salle), five local teams have won North Coast Section Titles. All those section champions are in the playoffs this year.
Will there be a breakthrough this season?
A reminder, game time for the night games is 7 pm, not the normal 7:30.
DIVISION 2
FRIDAY
7 PM
No. 9 Windsor (6-4) at No. 8 Pinole Valley (6-4)
CAL PREPS PROJECTION: Pinole Valley by 5
SATURDAY
DIVISION 2
No. 11 Northgate (6-4) at No. 6 Maria Carrillo (6-4)
CAL PREPS PROJECTION: Maria Carrillo by 7
No. 7 Casa Grande (4-6) vs. No. 10 American (8-2) at Tak Fudenna Stadium, Fremont
CAL PREPS PROJECTION: Casa Grande by 6
There is no heavy weight showdown that anyone is looking forward to in this Division, just a heavy weight team. That is Clayton Valley Charter who is a big favorite to win its third section championship in four years and they are expected to win it quite easily. If you want of an example of how easy, just look at last year when the closest game they were in was a 33-6 win over Concord in the Championship Game.
In 2011, Windsor won one of the local North Coast Section championships with that great 14-0 team.
This year the Jaguars are the dreaded No. 9 seed, so they have to go on the road to take on Pinole Valley. The winner will meet No. 1 Clayton Valley Charter, who has a first round bye.


Pinole Valley finished in third place in the Tri-County Rock Standings. They are used to high scoring games. The average score of their games is 36-34. They have scored at least 30 points in seven games and 40 in five. They have given up at least 30 in six games.
In the pre-league part of the schedule both teams met Miramonte, who is the No. 2 seed in Division 2 and both lost.
In the opening week of the season, Miramonte defeated Pinole Valley 52-42, which is as good an example as any about the high scoring games. That was the highest scoring game that they were involved in until last week when they defeated St. Patrick-St. Vincent 62-34.
While the game with Miramonte was a reasonable example of the Pinole Valley season, Windsor’s game with them was not. That game was Windsor’s worst game of the season, losing 49-3. You can blame that game for why they are on the road.
In the playoffs last season, Pinole Valley was one and only double digit seed to get to the semi-final round, that is in any division. They did it as a No. 11 and in the second round defeated No. 3 Windsor 29-14.
Maria Carrillo went 5-2 in the NBL race, which equaled its best in school history. When they lost it was usually one sided. The closest loss was 27-14 to Analy the second week of the season. The other three losses were by 22, 23 and 33 points.
If the Pumas stay close though, look out. Two of Maria Carrillo wins were by one point.
Northgate finished third in the Diablo Valley League, the league that was won by Clayton Valley. Concord, who is the No. 3 seed, finished in second. Northgate lost to those two teams by scores of 41-3 and 54-15. They aren’t the only team to lose to those two by those type of scores, especially Clayton Valley. Another loss was to Windsor back on Week 2 by a 38-22 score.
Even though Casa Grande is the higher seed, they have to go on the road because of the league champion rule, which only applies in the first round.
American actually tied for the Mission Valley League title and won the tie-breaker. In the power rankings the league is rated just below the NCL I.
American has outscored its opponent by an average of 42-22. Both of their losses were to Division 1 teams who finished at least .500.
They tied Moreau Catholic for the league championship and won the tie-breaker with a 27-20 win, which was Moreaus’s only loss of the season and a huge upset. The result looks really out of place in the Moreau Catholic schedule, they outscored their opponents by an average of 49-8 and is a No. 4 seed in the power packed Division 4 bracket.
American has lost first round NCS playoff games the last six seasons. Three of those have been to NBL teams.
DIVISION 3
FRIDAY
No. 15 Albany (5-5) vs. No. 2 Analy (10-0) at Santa Rosa High School
CAL PREPS PROJECTION: Analy by 46
No. 11 Novato (4-6) at No. 6 Petaluma (7-3)
KSRO GAME OF THE WEEK…BROADCAST TIME 6:35
CAL PREPS PROJECTION: Petaluma by 13
SATURDAY
No. 13 Piner (6-4) at No. 4 Bishop O’ Dowd (5-5)…1 PM
CAL PREPS PROJECTION: Bishop O’ Dowd by 36
No. 14 Terra Linda (4-6) at No. 3 Rancho Cotate (7-3)…7 pm
CAL PREPS PROJECTION: Rancho Cotate by 40

The heavy weight showdown people are pointing too is Analy vs. Rancho Cotate. That is at least the local fans, not so sure about the regional. That would be in the semi-finals, which are two games away. Both teams are at least a 40 point favorite in the Cal Preps Projection. Neither of the teams they are playing is over .500.
The team that Petaluma is playing isn’t .500 either. That is Novato from the Marin County League. Before last week’s 46-0 win over San Rafael, they had lost five of six.
The biggest problem for Petaluma might be trying to forget about last week’s heartbreak against Analy.
The four games featuring local teams are the most of any division. Of the four, only Piner is on the road, making a trip to the East Bay to take on Bishop O’ Dowd.
Bishop O’ Dowd isn’t over .500 either. Actually they are an even .500, but have still outscored their opponents 29-14. They have won three of four to get to the .500 mark. They haven’t finished over .500 since 2012 when they finished 7-5.
Last season Bishop O’ Dowd also ended 5-5. They lost their opening round playoff game as a No. 11 seed.
Piner goes into the game with a three game winning streak since losing back to back games to Petaluma and Analy.
DIVISION 4
FRIDAY
No. 15 Healdsburg (3-7) at No. 2 Cardinal Newman (8-2)
CAL PREPS PROJECTION: Cardinal Newman by 62
No. 9 St. Helena (9-1) at No. 8 Fort Bragg (10-0)
CAL PREPS PROJECTION: Fort Bragg by 11
The heavy weight showdown in this Division is Marin Catholic vs. Cardinal Newman. That isn’t just for local fans, but statewide fans as well. Still three weeks away from that game.
This is a power packed Division that is the deepest of the five. The combined record of the top ten seeds is 86-14, with the worst at 7-3.
Marin Catholic and Cardinal Newman miss all that in the first round. This is a fifteen team bracket so No. 1 Marin Catholic has a first round bye.
Cardinal Newman doesn’t have a bye, but they are playing a game that probably shouldn’t be played. The No. 2 seed is hosting No. 15 Healdsburg, who at 3-7, equals the worst record of any team in the NCS playoffs. Two other teams made the playoffs with the same record. They are both in Division 3.
It isn’t imaginable that an upset will happen in this game. Healdsburg goes into the game with a four game losing streak. There of the losses has been by at least 34 points.
Like Division 3, there are four local teams in this Division. Unlike Division 3, the four teams here are split in two games and are meeting the other.
The other game is St. Helena traveling to Fort Bragg. Those two teams add quite nicely to the impressive record of the top ten seeds at a combined 19-1. Of course the only loss is by St. Helena, which was to Fort Bragg.
That game was just two weeks ago. The Cal Preps projection for that game was St. Helena by 4. The numbers have changed since as has the home field advantage. Fort Bragg is an 11 point favorite in this game.
The winner of this game travels to Marin Catholic next week.
Cardinal Newman and Fort Bragg are on the list of local NCS champions over the past seven seasons. Fort Bragg won it in 2009 in one of the few brackets that was thrown upside down. As a No. 7 seed they beat No. 9 Justin Siena 23-18 in the championship game.
Cardinal Newman is the only team that has won two section titles. In 2008 they won in D2 and in 2010 in D3. This year they go for a triple in Division 4.
DIVISION 5
FRIDAY
No. 9 Stellar Prep (6-3) at No. 8 Cloverdale (7-3)
CAL PREPS PROJECTION: Cloverdale by 3
No. 10 Willits (5-5) at No. 7 Middletown (5-4)
CAL PREPS PROJECTION: Middletown by 22
This is probably the most open division and it would be overstating things that any showdown game is being looked forward too.
The No. 1 seed is Berean Christian, who is 9-1 on the season and has a first round bye. The loss was on the opening week of the season to Cloverdale 28-24. Since then they have outscored opponents by an average of 46-15. Along the way they have beaten four Division 5 teams that are seeded in the top seven, including a 49-22 win over Middletown in Week3.
If Cloverdale defeats Stellar Prep they will be set up for a rematch with Berean Christian. They host Stellar Prep who won the Bay Football League. That is the same league that St. Vincent is in. St. Vincent actually gave Stellar Prep its best game on its way to the league title before dropping a 47-22 decision. The 22 points is the most they have given up all season. Earlier in the year, St. Vincent dropped a 54-12 decision to Cloverdale.
Stellar Prep’s record is a little deceiving. Two of the three losses are forfeits of the first two games of the season. In games played they outscored opponents by a combined 73-14. The other loss was 36-0 to Ferndale, who is the No. 6 seed.
Middletown and Willits meet for the second time. The first time was the second league game of the season and Middletown went on the road and took 43-8 win. Willits went into that game 4-0 and the Cal Prep projection for that game was Willits by 1. This game it is Middletown by 22.
JC FOOTBALL
No. 25 Diablo Valley at No. 13 SRJC…SATURDAY 5 PM
PRE-GAME ON KSRO 1350/103.5 FM AT 4:35
This is the last regular season game for SRJC. It could be a game for a co-championship. More details coming on Friday.
My email address is jacpasquini@comcast.net
You can also follow me at twitter @homer2612
Share