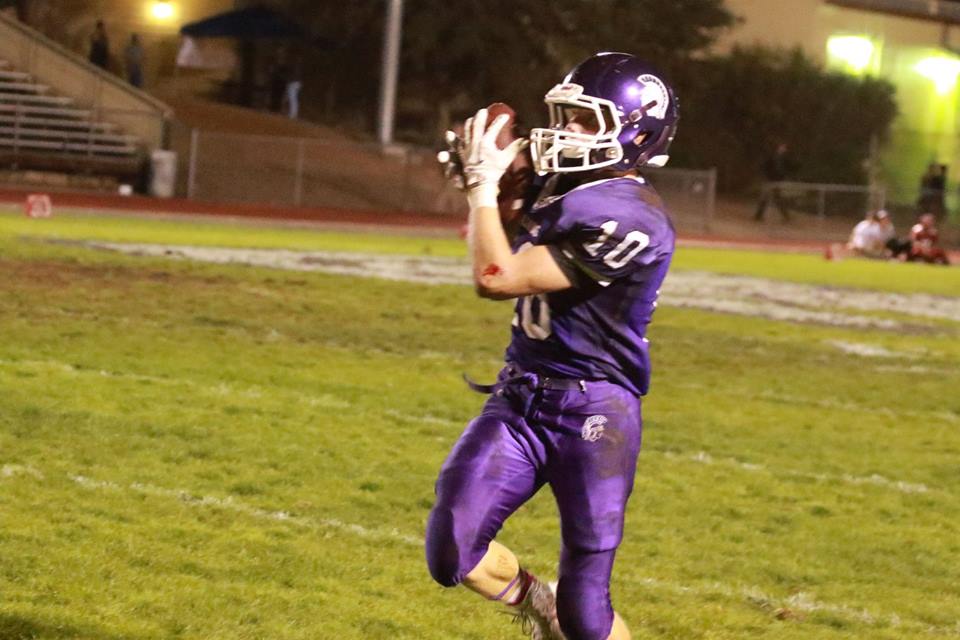 League play reaches the halfway mark and if you are looking for a surprise, it would be hard to find one. The league races are pretty much going the way expected at the beginning of the season.


If there is one surprise, and it is not a very big one, it is Petaluma, although you could make a case at the moment they are where they are supposed to be. The surprise might be how they are doing it.
Things didn’t start so well when they lost their first two games. They lost the opener to Windsor and then the alarms went out after a 48-19 loss to Vintage.
Since then it has been gold. They have won five straight, with four of them being one sided. The only game that wasn’t was the 29-22 victory over Piner, which they were fortunate to win. The other four wins have been by an average of 30 points a game.
Petaluma is an experienced senior team led by Quarterback Brendan White, who has nearly 1,000 yards in total offense (passing and rushing)with sixteen touchdowns. He has help from Running Back Lucas Dentoni, who is coming off his best game, rushing for 201 yards and two touchdowns in a 46-12 win over Healdsburg. On the season he has rushed for 827 yards and eleven touchdowns.
The Trojans have been noticed. They have moved to No. 5 in the YSN365.com rankings. That isn’t the only place they have been noticed. In the latest Prep2Prep NCS section rankings, they are No. 4 in the Division 3 projections.
It has been a long road back for Petaluma since 2009, which was Coach Steve Ellison’s last season of a great career. Petaluma went 12-1 that season, the loss in the semi-finals of the NCS playoffs.
Rick Krist took over the next season and things didn’t go well. Two years later, they had an opposite season going 1-9. They have gotten better each season. Last year they went 7-4, which was the first time they finished over .500 since 2009. One of the losses was to Analy 34-23, which is the closest SCL game in Analy’s three year run as champions.
That is the catch. The guerrilla in the building is Analy. They are SCL champions until somebody beats them and nobody thinks this will be the season that will happen.
Petaluma meets Analy on November 6th. The countdown for that game has begun and everyone will find out the answer then.
ALL GAMES FRIDAY AT 7:30 UNLESS NOTED
NORTH BAY LEAGUE
No. 7 Casa Grande (2-4) at No. 1 Cardinal Newman (4-2)…FRIDAY 7 PM
CAL PREPS PROJECTION: Cardinal Newman by 25
No. 9 Maria Carrillo (3-3) at No. 3 Rancho Cotate (4-2)
CAL PREPS PROJECTION: Rancho Cotate by 18
Santa Rosa (2-4) at No. 8 Windsor (4-2)
CAL PREPS PROJECTION: Windsor by 24
Ukiah (2-4) at Montgomery (0-6)
CAL PREPS PROJECTION: Montgomery by 3

Cardinal Newman is coming off the big win over Rancho Cotate. If they need help avoiding a letdown, all they have to do is look to last season when Rancho Cotate won the big showdown. The following week they were upset by Maria Carrillo and ended up sharing the league crown with Cardinal Newman.
Casa Grande is doing it again. Last year after losing its first five games, they won four of five to qualify for the NCS Division 2 playoffs and even won two playoff games. This year they have won two straight after a 0-4 start. Last season, the loss in the four of five streak to end the regular season was to Cardinal Newman.
Casa Grande is one of four teams that are sitting behind Cardinal Newman with one league loss. Two of the other teams meet with Maria Carrillo going to Rancho Cotate. Both those teams took turns the last two weeks losing to Cardinal Newman. Both teams need wins, not only to stay in the NBL hunt, but to help their playoff seed.
Rancho Cotate won its only game on the schedule against a Division 3 team so they have qualified for a playoff spot. The Cougars are looking for at the worst, a top four seed.
After this game, Maria Carrillo ends the season with three games against Division 2 teams. A win over one of them would qualify them for the playoffs. They need wins to get a home game in the first round.
The other one loss team is Windsor, who has qualified for a Division 2 spot. They are playing for a first round home game and still have Rancho Cotate and Cardinal Newman on the schedule.
Windsor hosts Santa Rosa, who needs to finish the season winning three of four to qualify for the NCS Division 1 playoffs.
That is the same combination for Ukiah, who needs to finish with three out of four. After this week’s trip to Montgomery, they have back to back games against Cardinal Newman and Rancho Cotate.
Things have changed at Montgomery, who not too long ago was one of the area’s powers. The Vikings are still looking for their first win. The best chance are the next two weeks with back to back home games against Ukiah and Santa Rosa. Montgomery has to end the season with four straight wins to become playoff eligible.
SONOMA COUNTY LEAGUE
No. 2 Analy (6-0) at Healdsburg (3-4)
CAL PREPS PROJECTION: Analy by 51
No. 6 Petaluma (5-2) vs. El Molino (1-4) at Windsor …SATURDAY 7:30
CAL PREPS PROJECTION: Petaluma by 40
Sonoma Valley (0-6) at Piner (3-4)…SATURDAY 1:30
CAL PREPS PROJECTION: Piner by 12
As the countdown to Petaluma-Analy gets closer, there is other business to take care of.
Analy and Petaluma have both qualified for the Division 3 playoffs.
All the rest of the teams in the league do still have playoff hopes. Some hopes are better than others.
With a 3-2 record against Division 4 teams and none left on the schedule, Healdsburg has already qualified. That doesn’t mean they will be picked. In the power rankings they are a bubble team.
Piner would be next on the list for the best chances at qualifying. They need to win two of three to finish the regular season. They have already played both Analy and Petaluma.
The rest of the teams basically need to win out to qualify.
NON LEAGUE
Elsie Allen (0-6) at Emery (1-5)…SATURAY 2 PM
CAL PREPS PROJECTION: Emery by 21
Is this Elsie Allen’s chance? The Lobos have won two games since 2011. One of them was over Emery.
Emery is in the Bay Football League, which is the same as St. Vincent.
Maybe that is the league Elsie Allen should be in for a chance to have more competitive games. The next two weeks when they move back to SCL play, they meet Petaluma and Analy.
NCL I
No. 4 St. Helena (6-0) at No.10 Middletown (2-3)
CAL PREPS PROJECTION: St. Helena by 17
Kelseyville (1-5) at No. 5 Fort Bragg (6-0)
CAL PREPS PROJECTION: Fort Bragg by 38
Willits (4-2) at Cloverdale (5-1)
CAL PREPS PROJECTION: Cloverdale by 24
Lower Lake (3-3) at Clear Lake (2-3)
CAL PREPS PROJECTION: Lower Lake by 1
It is easy to say countdown to the Fort Bragg-St. Helena game, which is two games away.
But first things first, as St. Helena goes to Middletown ,who battled Fort Bragg into the fourth quarter last week before dropping a 28-14 decision.
If the season ended last week, seven of the eight teams would be eligible for the NCS playoffs. Four of the eight teams have already qualified.
BAY FOOTBALL
Stellar Prep (Oakland) (2-3) at St. Vincent (2-4)…SATURDAY 2 PM
CAL PREPS PROJECTION: Stellar Prep by 29
The first Bay Football league game was a success for St. Vincent.
Stellar Prep is the league defending champion.
This is St. Vincent last home game of the season.
JC
No. 5 San Mateo (4-1) at No. 11 SRJC (3-2)…SATURDAY 5 PM
KSRO 1350 AM…103.5 FM…BROADCOAST 4:35
A preview of this game coming.
My email address is jacpasquini@comcast.net
Share