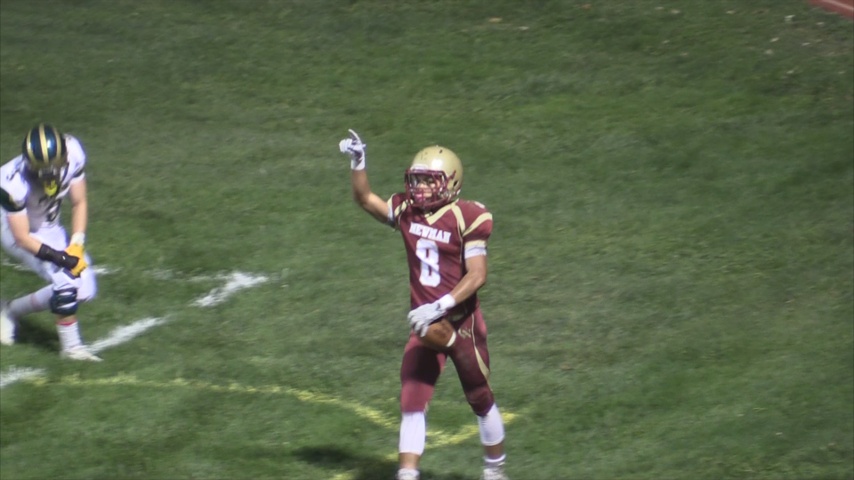 It is the game of the year in local high school football.
No. 3 Rancho Cotate at No. 1 Cardinal Newman
Actually the last few years that has been normal, especially since the realignment of the NBL and SCL. Before realignment, every so often a Casa Grande-Petaluma game would sneak in for the honor and there were several times a Montgomery-Cardinal Newman game would be hard to top.
But recently the Cardinal Newman-Rancho Cotate game has been the game and it usually lives up to the hype.

You want a championship type game? You got it. Since 2005, the winner of this game has won the NBL championship six times, with the loser finishing one game back. That doesn’t include last season, when they tied for the league crown.
You want close thrilling games? You got it. Four of the last five seasons, the game has been decided by seven points or less. Two games went into overtime, one of them was the seven point game and a bad snap on an extra point late was the difference in another.
These games aren’t close because you are waiting for something to happen. There is scoring and a lot of it. Last year, Rancho Cotate won in OT 45-38. Two years ago was the game that had the bad snap on the extra point, which Cardinal Newman won 42-41. Both teams have hit the twenty point mark in five of the last six games the teams have played in.
There is one pattern in this series that might give Cardinal Newman a slight advantage. The last time the road team won was in 2008, when Cardinal Newman took a rare one sided game in this series 42-7. The home team has won six straight since. The last time Rancho Cotate won at Cardinal Newman was in 2002.
Just in case you were wondering. The Cal Preps Projection says Cardinal Newman 38 Rancho Cotate 35.
NORTH BAY LEAGUE
No. 3 Rancho Cotate (4-1) at No. 1 Cardinal Newman (3-2)…Friday 7 pm
CAL PREPS PROJECTION: Cardinal Newman by 3
KSRO GAME OF THE WEEK…PREGAME AT 6:35
Montgomery (0-5) at No. 8 Windsor (3-2)…Friday 7:30
CAL PREPS PROJECTION: Windsor by 22
No. 10 Maria Carrillo (2-3) at Santa Rosa (2-3)…Friday 7:30
CAL PREPS PROJECTION: Maria Carrillo by 17
Ukiah (2-3) vs. Casa Grande (1-4) at Petaluma High School…Saturday 2pm
CAL PREPS PROJECTION: Casa Grande by 14


The Rancho Cotate-Cardinal Newman game isn’t actually for the league championship, it only feels like it is. Still a lot of football to be played and four teams are sitting with one league loss and still have to play at the least one of the league leaders, if not both.
Ukiah and Casa Grande is the only game between one loss teams, so the winner will be tied with the loser of the Rancho Cotate-Cardinal Newman game. They are also both Division 2 games, so it will also have an effect on the NCS playoffs. That is getting the cart before the horse, as each team has work to do to qualify. The loser of this game will take a big hit in qualifying.
Remember that game Saturday Afternoon at 2 pm at Petaluma High School.
Windsor is trying to stop a skid in which they have lost two of three against a Montgomery team looking for its first win.
The winner of the Maria Carrillo-Santa Rosa game will get its record to .500 overall.

SONOMA COUNTY LEAGUE
Piner (3-3) vs. No. 2 Analy (5-0) at Rancho Cotate High School…Saturday 7:30
CAL PREPS PROJECTION: Analy by 43
Healdsburg (3-3) at No. 7 Petaluma (4-2)…Friday 7:30
CAL PREPS PROJECTION: Petaluma by 27
El Molino (0-4) at Elsie Allen (0-5)…Friday 7:30
CAL PREPS PROJECTION: El Molino by 27
Sonoma Valley (0-6) BYE
The Healdsburg-Petaluma game is for early lead in the SCL race. Petaluma has a four game winning streak.
Analy is in the teeth of its league schedule. Piner is the first of two straight games against teams that are currently at .500. After the Saturday Night game with Piner, they travel to Healdsburg next week. The only other team SCL team that is at least .500 is Petaluma, who Analy hosts the final game of the regular season.
Piner is starting out league play with Petaluma and Analy, the only two SCL teams over.500.
There are three winless teams in the league. With El Molino meeting Elsie Allen, that number will reduce to two.

NCL I
No. 4 St. Helena (5-0) at Lower Lake (3-2)
CAL PREPS PROJECTION: St. Helena by 37
No. 5 Fort Bragg (5-0) at No. 6 Middletown (3-2)
CAL PREPS PROJECTION: Fort Bragg by 10
No. 9 Cloverdale (4-1) at Kelseyville (1-4)
CAL PREPS PROJECTION: Cloverdale by 28
Willits (4-1) at Clear Lake (1-4)
CAL PREPS PROJECTION: Willits by 17
Middletown plays its first home game since the Valley Fire and they don’t get to sneak into things. The next two weeks they host Fort Bragg and St. Helena, the league co-champions and two of the three area teams still undefeated.
The NCL I race is looked at much like the NBL race in the sense that it is expected to be a two team race. The next two weeks will go a long way in determining that.
St. Helena is hosting a Lower Lake team, who after a 3-0 start has started league play against the NCL I version of murderers’ row. The Trojans 0-2 league start feaures losses to Middletown and Fort Bragg.
Cloverdale and Willits are both 1-1 in league play. They both go on the road to meet teams that are 1-4 overall.

BAY FOOTBALL
CSD (Fremont) (3-3) at St. Vincent (1-4)…SATURDAY 2pm
CAL PREPS PROJECTION: St. Vincent by 5
This isn’t official, but it is believed that St. Vincent is playing its first league game in school history that has nothing to do with the NCL World.
This league is spread out to as far south as San Jose. The team from San Jose is Harker high school and is in Division 4. All the other schools are Division 5.
Stellar Prep is the defending Bay Football League champions and the highest team in the league in the power rankings.

JC
SRJC (3-2) BYE
The next game is on October 6th, when they open league play with a home game against San Mateo.
WANT TO COACH SOME BASEBALL?
Petaluma High School is looking for a freshman baseball coach. If you are interested contact Petaluma Varsity Head Coach Paul Cochrun at 415-596-1829 or email him at pcochrun@petk12.org.
My email address is jacpasquini@comcast.net
Share