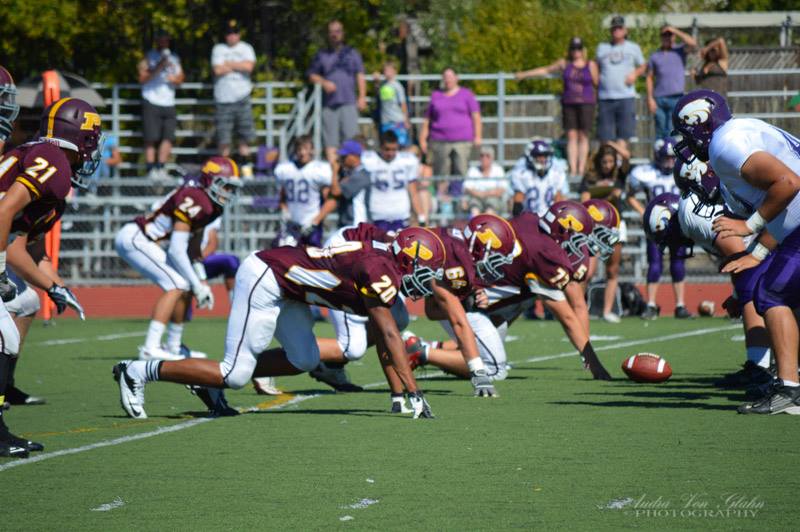 The high school football season heads into the home stretch and all four leagues have a clear cut first place team.  One league has a first place-second place game this week.

Two others are moving in that direction and one other should decide its league champion.

Trevor Taylor, Mendocino College…Yes we move out of the high school world for this one to honor a Community College player that plays in the high school area we cover and is a graduate of a North Bay League school.

Taylor, the starting quarterback for Mendocino College and graduated from Ukiah High, passed for what appears to be a record 796 yards and nine touchdowns.

This wasn’t a stat padding kind of game.   It was needed yardage as Mendocino still lost the game to Redwood 69-66 to drop to 1-5 on the season.   .

The two quarterbacks, Taylor of Mendocino and Redwood’s Will Hissong combined to go 77-106 for 1,369 yards with fourteen touchdowns and two interceptions.

Mendocino Running Back Jakorin Graves also carried the ball 30 times for 257 yards and one touchdown.

Despite that Redwood’s out rushed Mendocino 287-245 with two players going over the 100 yard mark.

Mendocino had five receivers with over 100 yards in receiving and four who caught touchdown passes. That includes Dumitri Malnasi ,who had ten catches for 205 yards and one of the touchdowns.

Redwood jumped out to a 21-7 lead after the first quarter.  After that there were six lead changes and one tie.    The last lead change came with :05 left when Hissong hit Lomboy Sanchez with a five yard touchdown for the winning score.

If you like numbers, check out the box score.

Casa Grande has been the story so far but there is some race to take care of  Two teams, Cardinal Newman and Montgomery are only one game back.  To add to that the regular season ends with Casa Grande traveling to Cardinal Newman.

But before we get to that, there are the pesky details of two weeks of action to get through.

The Casa Grande coaching staff should be sending a letter of thank you to Montgomery.   If they had any worries about the team looking past Ukiah, all they have to say is Montgomery 38 Ukiah 35…3 overtimes.

Add to it the unknown at quarterback, well fairly unknown.  Cheyenne Noda was the starting running back for Ukiah three weeks ago.  Because of injuries he has moved into the quarterback role for the first time in his life.  Not too bad of start. with both games over 300 yards in total yardage and the near upset.

The biggest moment of this game might have already happened.  How long it took Ukiah to recover from the near miss.

Because of the near upset, Montgomery won’t be in a good mood going into its game with Santa Rosa.  Add to that, last season Santa Rosa beat them for the first time since 1990. So this Montgomery team should be ready.  Add to it Montgomery needs wins to stay in the NBL race and for a higher seed in the upcoming playoffs.

Santa Rosa, who after starting 2-0 has lost five straight, can take comfort that Montgomery isn’t as big of favorite in the Cal Preps Projection as they were last week.

Playoffs are a bigger issue for others.  With the hopes of the NBL championship now gone, Maria Carrillo, Rancho Cotate and Windsor still have some work to do.  Rancho Cotate has already qualified for a spot. Maria Carrillo needs two wins, Windsor needs one.  All three teams are at about the same place in the power rankings which is on the bubble for a first round game.

Not only would a win get Windsor a playoff spot, but play spoiler and take Cardinal Newman out of the NBL race.

In has been a conclusion for some time that Analy would successfully defend its SCL title.  Sometime Friday Night it may be official.  An Analy win over Elsie Allen will give them their second straight SCL championship.  It wouldn’t give them the sole title unless El Molino also beat Sonoma Valley, but would give them a one game lead with one to go and because of the win over Sonoma Valley they have the tie-breaker advantage.

Analy wraps up regular and league season play with a home game on November 1st against Petaluma.  They then get a week off before they host a round one game in the NCS Division 3 playoffs on the weekend of November 8th.

Sonoma Valley has the edge in the race for second place.  They have wins over two of the four teams that have two league losses and meet one of the others this week at El Molino.  They also end the regular season at Petaluma on November 8th.

Analy isn’t getting as much respect in the people rankings as in the power rankings.  They are an honorable mention in this week’s Cal-Hi Sports Northern  California Division 3 rankings.

The other two teams with two league losses are Piner and Healdsburg who are both Division 4 teams.  The winner of that game will not only qualify for an NCS Division 4 berth, but go a long way to assuring a round one home game.

With two games to go, a win for Piner will match the four wins they had last season, which was the most for the program since 2003.

Four teams are 3-1, one game behind Middletown in the NCL I race.  Middletown has beaten three of them and goes for No. 4 when they visit Cloverdale.

That Cloverdale is on the list as one of the 3-1 teams is a surprise.  They have won three straight which is more wins they have had the last three years combined.  The lone league loss was 20-19 to Clear Lake.  They still have Fort Bragg and St. Helena on the schedule, two other teams that have one league loss.

One of those will go to two this week as they meet in St. Helena.

The other one loss team is Clear Lake who hasn’t impressed the computers as being a one point underdog against 0-4 Kelseyville shows.

Calistoga is playing its second game in four weeks.  Senior running back Dylan Alvardo is averaging over 10 yards a carry and 200 yards a game.

Calistoga will take a big interest in the St. Vincent-Tomales game.  The two are one game behind Calistoga and both teams still have them on the schedule.

St. Vincent’s two losses are to St. Vincent and CSD Fremont by a combined 12 points.   Those are the only two games they have allowed double figures in points.

Earlier this week it was reported here that St. Vincent needed one win to qualify for the North Coast Section Division 5 playoffs.  That turned out to be incorrect.  They have a 4-1 record vs. Division 5 schools so they are already eligible.

A win will give Gary Galloway, who has coached St. Vincent since 1984, his 199th win of his coaching career.

Tomales is on the other end scoring than St. Vincent.  They have scored at least thirty points in all but two games.  Those two games were both shutouts including 6-0 to Castlemont of Oakland, a game they were awarded the win because of a forfeit.

St. Vincent won last year’s game 34-0 in a game that decided who would finish co-champions with CSD Fremont.  It was one of three league losses for Tomales, who hadn’t lost a league game since 2005.

SRJC meets the only Nor Cal league team that is under .500.

Foothill lost its opening league game to No. 4 San Mateo 33-0.

This is the first time in four weeks that SRJC is on the road.

The highlight matchup for the league will be played at the same time with No. 7 San Francisco at No. 4 San Mateo.