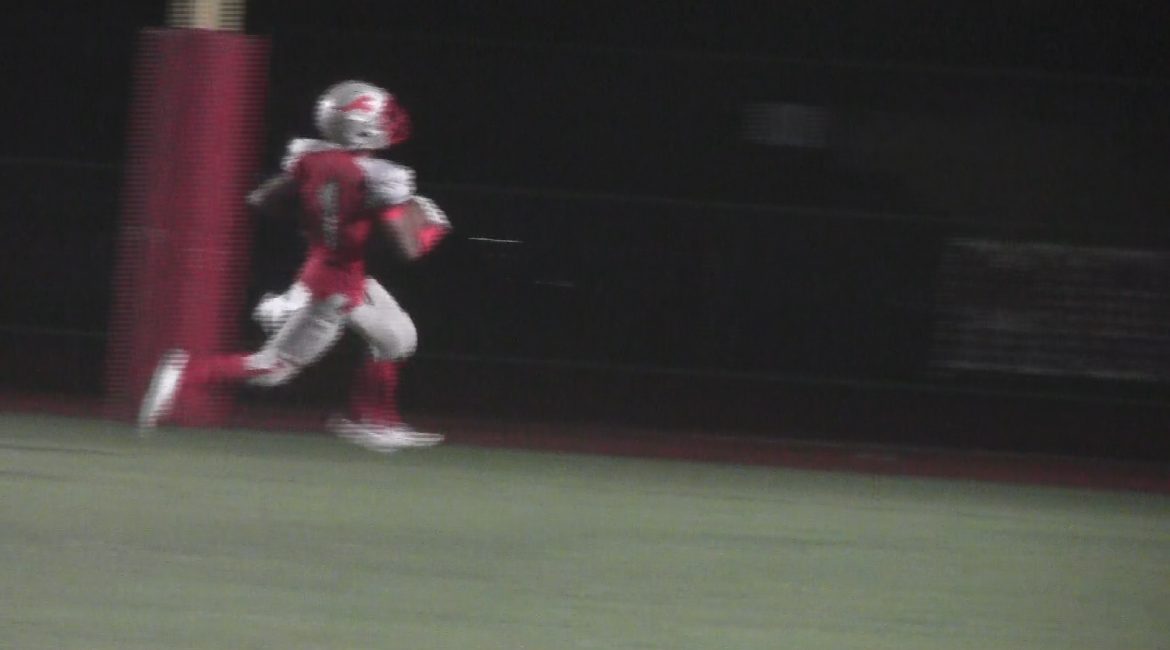 
Over the last four seasons the Cardinal Newman-Rancho Cotate football game entertainment value has been off the charts.    You could make a very strong case it has been the best show in the area.
That was after a time when the rivalry was one sided.   Cardinal Newman won every game between the teams from 2004-2009, including two playoff games.   Outside a double overtime classic playoff game in 2005, the games weren’t close.   The closest of the other six was 28-14
Since then two teams have gone 2-2, protecting their home field and what games they have been.
Three of the four games have been decided by seven points or less.  One of the games went into overtime.
The best game might have been last year in which Cardinal Newman rallied from a 21-0 deficit and took a 42-41 win, the difference in the game was a bad snap on an extra point attempt with three minutes left.
Of course Rancho Cotate fans would say the best game was the 27-21 OT win in 2010 which was the difference for a league championship.
This game looks like it could be the same kind of game as last year, meaning a lot of scoring.  There has been an average of 67.6 points in each game that both Rancho Cotate and Cardinal Newman have played this season.   That is tied for the highest mark in the area.   Analy is third at 64.6.
Rancho Cotate is averaging 41.2 a game, which is tied with Analy for the best in the area.    Cardinal Newman is averaging 36.4 which is third.
With all those offensive numbers the biggest key might be what defense comes up big.  That has been an issue for both teams.  Cardinal Newman is giving up an average of 31 points a game and Rancho Cotate 26.
Things have gotten better for Rancho Cotate over the past three weeks.  They have given up an average of 17 points a game, but they led two of the games 49-6 and 28-0 and won the other 45-10.
The least amount of points Rancho Cotate has scored is 29.
In the two losses, Cardinal Newman averaged 18 points a game.
Windsor needs a win to stay in a tie for first with the Cardinal Newman-Rancho Cotate winner.
Montgomery needs a win to stay within shouting distance of first place.
This is the third season that Windsor has been in the NBL and they have dominated the games with Montgomery outscoring the Vikings 59-7.

SATURDAY
No. 1 Analy (4-1, 1-0) at Piner (3-3, 1-1)
CALPREPS PROJECTION:  Analy by 35
Petaluma and Healdsburg each still have to play Analy, so with already one league loss; they can’t afford another one if they are going to stay in the battle for second place in the SCL.
Healdsburg’s best chance to sneak into the NCS Division 4 playoffs is to finish .500 in league.  With Analy looming that makes this close to a must win.
Petaluma qualifies for a NCS playoff berth with a win.
The series has been close over the years, although lately the games haven’t.   The two teams have split the last six games.  The closest game was two years ago when Petaluma won 33-20.
The last three years the road team has won.
El Molino is the only team besides Analy that is undefeated in league play.  Both have played one league game.
Both starting quarterbacks in the Analy-Piner game have a good chance to go over the 1,000 yard passing mark.   Analy’s Will Smith needs 11 yards why Piner’s Tony Martignoli needs 60.

NON LEAGUE
Sonoma Valley (1-4) at McClymonds (Oakland) (4-0)
CALPREPS PROJECTION:  McClymonds by 62
What back to back weeks for Sonoma Valley.   Last week they were at Analy and now they get to play a team that beat Analy two weeks ago by a worse final score than Analy beat the Dragons.
To add to that, since beating Analy, McClymonds hasn’t played since.

Clear Lake (3-2, 0-2) at Lower Lake (2-3, 0-2)
CALPREPS PROJECTION:  Lower Lake by 2
With the biggest spread being seven points, the projections show how balanced this league is.
If it wasn’t for the Cardinal Newman-Rancho Cotate game, the Middletown-St. Helena game would be the YSN365.com Game of the Week.
Middletown has a ten game league winning streak.   The last loss was to St. Helena in 2012.
St. Helena has won nine of ten league games.   The only loss was to Middletown last year.
There seems to be a theory that a team schedules its homecoming against a team that they are pretty sure they can beat to add to the festivities.   Not the case here as it is St. Helena’s homecoming.
St. Helena running backs Jack Preston and Jahaiver Otero each rushed for over 100 yards last week in the win over Lower Lake.   They could both go over the 400 yard mark for the season in this game.
The winner will be the last undefeated NCL I team.  The loser will join two other teams with one league loss.
Which two teams are to be decided as in two other games one 1-1 team is meeting another.
Fort Bragg quarterback Kaylor Sullivan needs 112 yards to go over the 2,000 yard mark for the season.  He is averaging over 350 yards a game.   He has five receivers who have at least 200 yards in receptions, led by Sophomore Lucas Triplett who has caught a team high seven touchdown passes.
After finally playing its first home game Cloverdale is back on the road again at Willits.
Cloverdale running back Luke Bernardi is coming off his best game of the season rushing for 237 yards in the 21-14 loss to Kelseyville.   Unofficially he needs less than 200 yards to go over the 1,000 yard mark.
Willits needs two wins to go from a 0-10 team in 2013 to a playoff eligible team in 2014.
There is a possibility that all eight teams could become eligible for the NCS playoffs.  If Lower Lake defeats Clear Lake all eight teams will be at least .500.
Each team has scored more points than it has given up this season.

SATURDAY
Upper Lake (0-5, 0-1) at St. Vincent (1-4, 1-0)
CALPREPS PROJECTION:  St. Vincent by 46
The league does have the schedule makers dream going for it.  That is if the Cal Preps projection is right.  This would set up a battle for first place when St. Vincent travels to Tomales on October 17th to end the first half.  The two teams meet again to end the regular season at St. Vincent on November 8th.

JC FOOTBALL
SRJC (5-0)  BYE
The Bear Cubs ended a successful pre-league schedule as one of five teams in the state 5-0.   They are No. 3 in the State and No. 2 in the Northern California National Division rankings.
Their first two league games are on the road at San Mateo and San Francisco the No. 3 and 4 teams in the Northern California National Division rankings.   San Mateo is No. 4 in the state.
My email address is jacpasquini@comcast.net