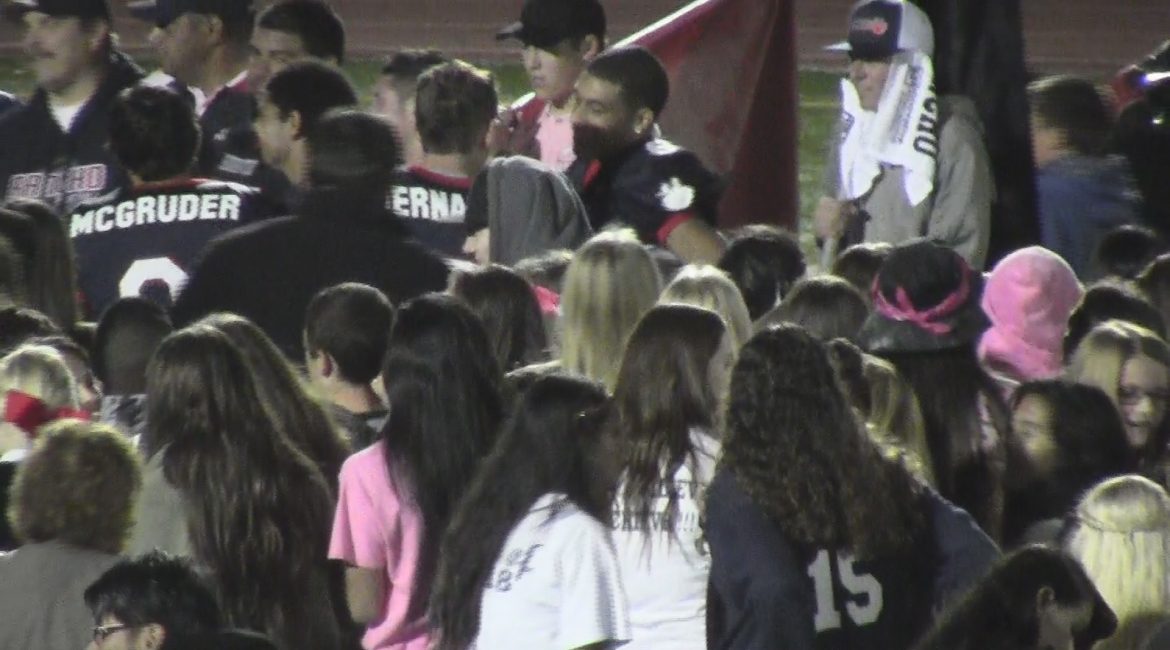 Two weeks ago was a week of showdowns in several leagues.
Last week  was upset alert.
This week is a little bit of both.
That is especially true in the NCL I, where two weeks ago the Middletown-St. Helena showdown was for all the marbles.  At least that was the logic.
Well the marbles could be shaken up.  St. Helena is in sole possession of first place with a one game lead over three teams.  St. Helena is meeting one of those teams.  At the same time the other two teams are meeting.
Meanwhile there is showdown No. 2 in the NBL with Rancho Cotate traveling to Windsor.
There has been quite a few  responses to the rant with the rankings the other day.   There will be some more comments on that in a future “This and That”.
NORTH BAY LEAGUE
Rancho Cotate (4-3, 3-1) at No. 2 Windsor (7-0, 4-0)
YSN365.COM GAME OF THE WEEK
KSRO 1350AM/103.5 FM GAME OF THE WEEK
CAL PREPS PROJECTION:  Rancho Cotate by 3

Montgomery (3-4, 2-2) at Santa Rosa (1-6, 1-3)
CAL PREPS PROJECTION:  Montgomery by 14
The Rancho Cotate-Windsor game decides how complicated things will get in the NBL race.  Rancho Cotate needs a win, not only to keep them in the hunt, but to keep other teams in it too.
A Windsor win and it’s a countdown to the Windsor-Cardinal Newman game, which ends the regular season.
The two teams met twice last season.   Both games were at Rancho Cotate and had completely different personalities.  In the league opener Rancho Cotate took a 43-14 win.   Then in the first round of the NCS Division 2 playoffs in a No. 9 vs. No. 8 matchup, Windsor took a 32-10 win.
Cardinal Newman plays its second straight one win team as it hosts Ukiah.   In between this game and the Windsor game they go to Montgomery.
If Rancho Cotate wins, the Vikings and Maria Carrillo can stay in the championship hunt.  That is if they win.  If they do they would be one out with two to go and Maria Carrillo still has Windsor on the schedule.
So things could get very interesting.
It is big game week with Montgomery traveling to Santa Rosa.   It is a big game in the sense that this is a rivalry between the two oldest schools in Santa Rosa.   The student bodies from both school have events leading up to game day.
While the winner of the off the field fun might be too close to call, the on field action has been one sided.  The last time the two teams met at Santa Rosa the Panthers took a 28-7 win.  That was in 2012 and is the only time that Santa Rosa has won the game since 1990.
Santa Rosa has won two NBL games since, both over Ukiah.
Maria Carrillo is in one of those sandwich games at Casa Grande.   It is one week after the win over Rancho Cotate and a week before a trip to Windsor.
Casa Grande is still looking for its second win of the season.   As unusual as it is to see Casa Grande with the record they have, it is also unusual to say they are in the spoiler role and in the middle of a sandwich game.
SONOMA COUNTY LEAGUE
No. 1 Analy (6-1, 3-0) at El Molino (4-3, 2-1)
CAL PREPS PROJECTION:  Analy by 35

Clear Lake (3-4, 0-4) at Kelseyville (4-3, 1-3)
CAL PREPS PROJECTION:  Kelseyville by 13
The NCL I has had the look of a balanced league all season.
This is the acid test of how balanced it is will be in the end.  It was generally figured the St. Helena-Middletown winner would be league champion.   Two other teams have been floating close and trying to make an impact.
St. Helena might feel like they have some unfinished business in Fort Bragg from two seasons ago.    The two teams were playing in what was basically a game for the league title with two games to go.   The game went into overtime and after St. Helena had scored to take a 21-14 lead.  Fort Bragg scored and then converted a two point conversion to take a 22-21 win.   St. Helena had won two straight league championships and had a twenty game winning streak.
The two teams go about things different.   St. Helena is more of a rushing team, while Fort Bragg does more passing.
St. Helena quarterback Jack Preston does both.  He could have a double 1,000 yard year in passing and rushing.    He has passed for over 800 yards and rushed for over 600.  He has scored a team tying nine touchdowns.   He is tied with running back Jahaiver Otero, who has come on in the last three weeks as he has rushed for nearly half of his 684 yards on the season, including a 231 yard game last week in a 20-8 win over Clear Lake.
Fort Bragg is a passing show, with nearly two thirds of its offense through the air.  That show might be just starting with all the underclassmen on the team, led by the arm of Junior quarterback Kaylor Sullivan, who should go over the 2,500 yard passing mark in this game and has thrown twenty five touchdowns.  The main target has been sophomore receiver Lucas Triplett, who has a shot at a 1,000 yard season and has caught at least one touchdown pass in each game.
Ten different receivers have caught touchdown passes this season.  Two are sophomores and five are juniors.
Fort Bragg is averaging over 35 points a game, which is tops in the NCL I and fourth overall in the area.
That too is opposite of St. Helena, who is giving up 13 points a game, which is second in the NCL I.
Middletown is No. 1 in league in defense giving up 12.1 a game.   That is second in the area behind Windsor who averages 11.5.
Cloverdale had that honor going into last week, but gave up 20 points to Lower Lake.  Fortunately they had their biggest offensive game of the year and controlled things in a 40-20 win.
The other two games have playoff implications, although where Clear Lake is in the Division 5 power rankings (even though they could become eligible by winning two of three), they probably wouldn’t be picked in the eight team bracket.   So they are on spoiler alert against Kelseyville who is in Division 4.
Going into league play both teams were hoping for bigger things after a 3-0 start.   The two teams have won a combined one league game.
Both Lower Lake and Willits are bubble teams for NCS Division 4.   Both also have work to do to qualify so this is close to a playoff like game.

Upper Lake (0-7, 0-3) at Tomales (5-2, 2-1)
CAL PREPS PROJECTION: Tomales by 36
The NCL II starts the second half of its round robin.  St. Vincent and Tomales won the first meetings which opened league play by wide margins.

JC FOOTBALL
No. 7 SRJC (5-1, 0-1) at No. 6 San Francisco (5-1, 1-0)
The Bear Cubs are on the road to meet a top ten team for the second straight week.
Last week Santa Rosa was Ranked No. 4 and they dropped their first game of the season to No. 3 San Mateo 24-21.  San Mateo has moved to No. 2 in the state.   American River is No. 1 and they only undefeated team left in the state.
San Francisco opened league play with a 62-7 win over De Anza.   It was the second straight week they have hit the 60 point mark.    The teams they did it against have a combined record of 3-7.
Three weeks ago San Francisco suffered its only loss to No. 1 American River 13-0.  In that game they were held to 160 yards in total offense.    In the last two weeks they have averaged over 500.
San Mateo goes to De Anza, who is the only winless team in the conference.    Foothill is 1-5, everyone else in the league is 5-1.
SRJC will be home the next two weeks against De Anza and Foothill.
My email address is jacpasquini@comcast.net