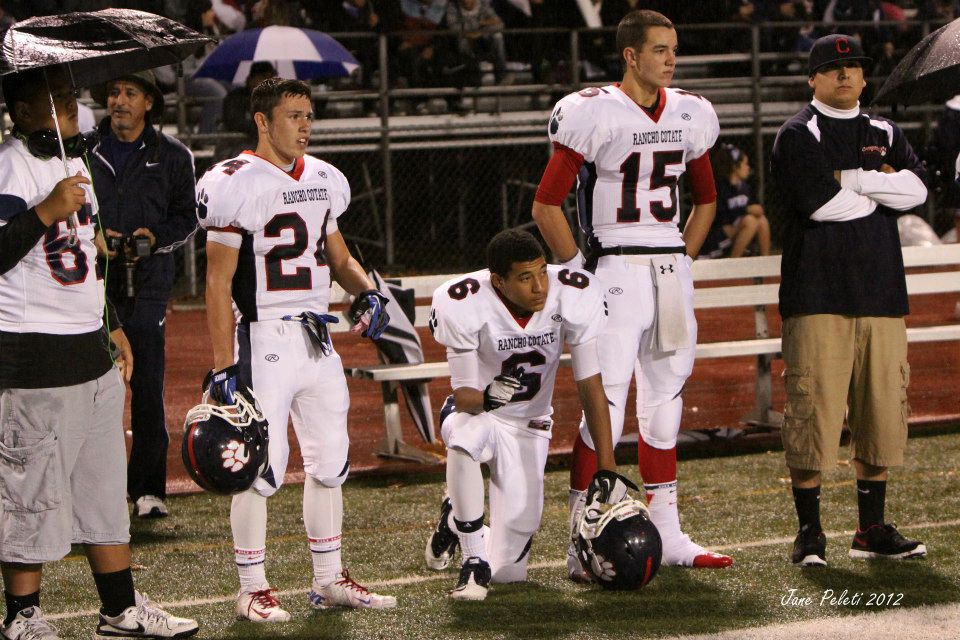 One last week before the business of deciding a league championship takes center stage.

Casa Grande is the only team in the NBL who is guaranteed to go into league play undefeated.   Montgomery, Rancho Cotate and Santa Rosa have a shot.

In the NCL I Clear Lake, Kelseyville and Middletown are undefeated and need to win this weekend to stay that way going into league play.

Calistoga, yes the team that was winless two years ago, is the only undefeated team left in the NCL II/Bay League.

YSN365.COM PLAYER OF THE WEEK

John Porchivina, Casa Grande…rushed for 109 yards and two touchdowns in Casa Grande’s impressive win over Napa.   He has five of the Gauchos ten touchdowns on the season.  He also had a team high eleven tackles which included his first sack of the season.

Santa Rosa is trying for its first 3-0 start since 2007 when they started 4-0.  Since then, last year was the only season they had more than three wins going 4-6.  2007 is the last season that they made the NCS playoffs.   The 25-14 win over Antioch last week makes them eligible for this year’s Division 1 playoff.

Deer Valley is ranked No. 9 in the Chronicle’s Bay Area rankings and has scored 105 points in its 2-0 start.

The KSRO crew gets to do what teams do during the pre-league stage of the season.  That is travel.  They will head to the East Bay to see if Rancho Cotate can start 3-0 for the third time in six years.

The Cougars meet an American Canyon team that might not be in a good mood after what happened last week.  Against Stagg, a team from Stockton, they scored 28 points to take a 35-28 lead with six minutes left only to lose it 36-35.

American Canyon is coming off an 11-2 record.   They are a running team averaging 400 yards in the first three games this season and averaged over 300 last year.  A good chunk of that yardage belongs to Jomon Dotson who is averaging over 200 yards this season and rushed for over 2,100 last season.  He had 257 in the loss to Stagg last week and is averaging over 12 yards a carry.   Including his freshman year as a JV Dotson has rushed over 4,500 yards and scored 51 touchdowns.

In the preview last week it was mentioned how interesting it might be to see how Analy and Maria Carrillo would react to the game they had against each other the week before.

Analy has the right kind of team for a bounce back game as they host Stellar Prep.  They are in the NCL II/Bay Football League and are in the second year playing football.  Last year they went 2-8 and this year 0-2 and have been outscored 88-20.

Analy is still not sold on its starting quarterback.  For the second time in three games they used both Senior Jacob Royer and Junior Will Smith and they combined to go 145 of 34 for 149 yards.

The schedule isn’t as convenient for Maria Carrillo who travels to Alhambra, whose only loss is to Rancho Cotate 21-14.

Speaking on interesting it will be that to see how Piner reacts to its tough loss to Tamalpais.  They have a tough one traveling to Hercules, whose only loss was in overtime to Acalanes is 3-0.

Elsie Allen is coming off a win for the first time in nearly two years and they are meeting the team they got its last win against.  October 7th, 2010 Elsie Allen defeated Emery 45-12.

That Emery team went 1-10 and lost by ugly scores.  They are a different team now.  Last year they improved to 4-5 and this year they are a 22-18 loss to John Swett from being undefeated.

Emery hasn’t had what one would call a killer schedule, but has the kind of schedule to help develop a program.

For the second straight week Middletown is the No. 1 ranked small school team by the Press Democrat.    Middletown who is off to an impressive start has had to forfeit its two wins because of the use of an ineligible player.   We will comment on that on a later date, but it turns out that officially the El Molino-Middletown game is between two winless teams.

Healdsburg and Piedmont has opened the last three seasons with Healdsburg winning all three.  Healdsburg also won a NCS playoff game against Piedmont at the end of the 2011 season.

Healdsburg lost to Middletown last week 35-0.  With the ruling about Middletown and the forfeits, Healdsburg officially gets the win and is 2-1.

A win for Kelseyville will give them as many wins as they had all last season.   They have finished over .500 only one time in seven years.

CSD of Fremont tied St. Vincent for the 2012 NCL II/Bay Football Championship and won the tie-breaker with a head to head win.   Just like last year they got the jump on league play with Calistoga.  In last year’s game they rallied in the fourth quarter to take a 35-29 win.  Calistoga led 22-6 in the second quarter.

Calistoga senior running back Dylan Alvarado is averaging over 140 yards and game and over 10 yards a carry.

Don’t be fooled by Washington of Fremont’s 0-2 record.  The losses were two teams that are ranked in the top twenty in the Bay Area.  Windsor hasn’t played in two weeks.

Montgomery has started the season by scoring at least 50 points in each of its two wins.   The also meet a Washington team, this one from San Francisco, who won its first game last week by defeating San Rafael 35-0.  They were outscored 69-15 in a 0-2 start.

SRJC tries to go to 3-0 with the trip to the capital city.  The Bear Cubs jumped from No. 24 to No. 16 in the state rankings with the win over Diablo Valley last week.

K’lan Anderson did it all in the win over Diablo Valley in which they dominated the second half in a 34-20 win. Anderson rushed for 118 yards and two touchdowns, caught five balls for 134 yards and another score and threw a touchdown pass with 12 minutes left for the game’s final score.

Five of the six teams in the Nor Cal league are 2-0.  The only one who isn’t is Foothill who is 1-1.  League play for the Bear Cubs is still three weeks away.