FOOTBALL RECAP: A SLICE OF NORMAL FOR MIDDLETOWN 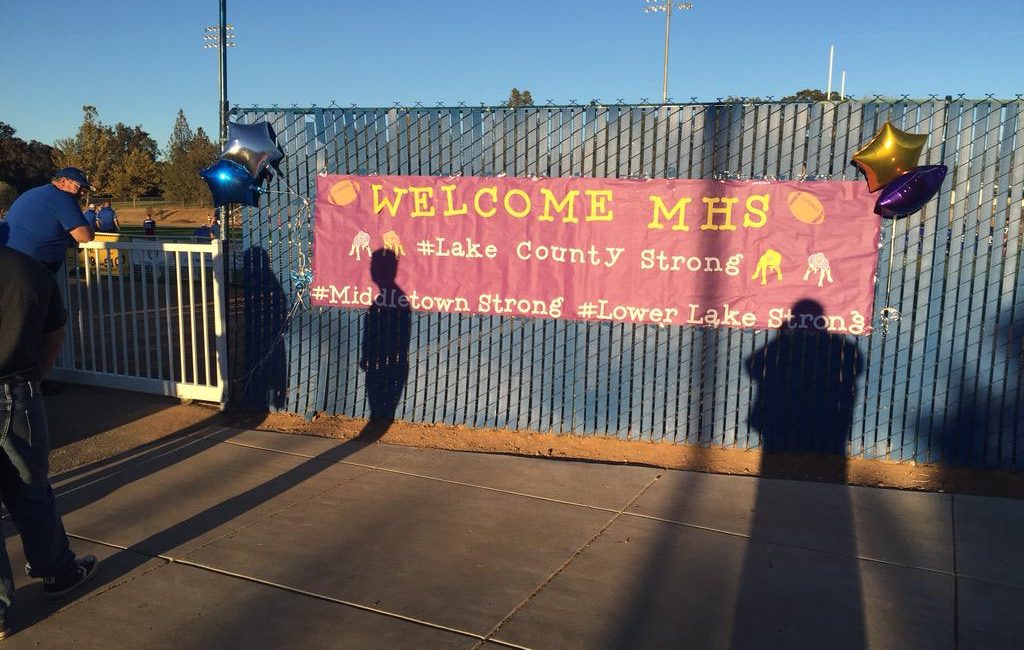 It was an average Friday morning. I was at my main job and mentally getting ready for a busy weekend.
I got a text from a guy I have known for a while, who happens to cover high school sports. Among other things he is a beat writer for the Justin Siena Football team, who had its game on Saturday. He asked me, if I had my choice of the Friday Night gamesto go to, which one would it be? I gave him two choices, but there was only really one and that was Middletown at Lower Lake.
The Middletown community is a long way from normal. They may never see normal again, at least what was normal two weeks ago. But a step in that direction, and it maybe a baby step, is having the high school football team playing.
The reporter, whose name is Daniel Poullter, was making the trip I wish I could have made. I received a text from him when he got to Middletown that said the fire came within 100 yards of the high school. That is the size of a football field. Until that moment, I hadn’t realized how close it was.
Don’t underestimate the importance of the fact that the high school is still standing. Being from a small town, I will tell you the high school is the pride and joy. Mentally the high school still standing is a big deal.
There were rumors that Sunday morning that the high school was gone. It sounds like it is close to a miracle that Middletown High School is still standing.
That they were playing a football game two short weeks after is also a minor miracle. From reports on Facebook the town came out for it and Lower Lake welcomed them.
It didn’t really matter if they won or lost, but as the local will tell you, its Middletown football, so the expected happened. Middletown defeated Lower Lake 21-0. It was the Mustang’s first win of the season.
There isn’t going to be much happeingn anytime soon in this area in which the thought of the fire will not be too far behind. That is the case here. The star of this game, from the football sense, was Coleman Drew. It was reported his family was one of several who lost their house in the fire. On this night, the running back rushed for 181 yards and two touchdowns.
Congratulations to both teams for getting this game done and as time goes on remember, you are in people’s thoughts.
The people from both communities were stars on this night.
NORTH BAY LEAGUE
No. 2 Cardinal Newman 35 Santa Rosa 10
No. 3 Rancho Cotate 48 Casa Grande 28
No. 6 Maria Carrillo 49 Montgomery 7
No. 7 Windsor 39 at Ukiah 22
Jordan Brookshire was back at quarterback for Cardinal Newman and rushed for three touchdowns. Brookshire scored one of Cardinal Newman’s two third quarter touchdowns as they broke the game open.
Casa Grande had an early lead against Rancho Cotate, but too much offense in general and too much Chris Taylor-Yamonaha in particular was too much period. Taylor-Yamonaha had his finger prints all over this game, scoring three touchdowns and intercepting two passes.
The defining moment was right before halftime. Rancho Cotate had a 21-14 lead and Casa Grande was threatening to get into the locker room tied. But a turnover was followed by a Taylor-Yamonaha’s touchdown catch with :11 left and Rancho Cotate had control and would go from there.
Josh Groesback scored Maria Carrillo’s first four touchdowns as they ran away from Montgomery. Maria Carrillo travels to Cardinal Newman next week.
Windsor pulled away in the second half to defeat Ukiah. David Escarcega scored three touchdowns. The last on a 35 yard pass from Max Brown which gave Windsor control at 31-15. It was one of Brown’s four touchdown passes.
SONOMA COUNTY LEAGUE
No. 1 Analy (4-0)…BYE
No. 10 Petaluma 51 Sonoma Valley 13
Piner 60 Elsie Allen 0
Healdsburg 42 El Molino 26
Lucas Dentoni scored two of his four touchdowns in the first quarter as Petaluma jumped out to a 14-0 first quarter lead and never looked back. Petaluma has won three straight.
Dillion Riveras intercepted a pass and returned it 18 yards for a touchdown on the first play of the game for Piner and they went from there. The Prospectors are 3-2.
Healdsburg broke open a close game with a big fourth quarter in its win over El Molino. Bryant Herrguth rushed for three touchdowns.
NCL I
No. 8 Cloverdale 13 at No. 4 St. Helena 41
No. 9 Willits 28 Kelseyville 19
Middletown 21 Lower Lake 0
No. 5 Fort Bragg (3-0) BYE
After a scoreless first quarter, St. Helena controlled things the rest of the way in its win over Cloverdale.
The game turned midway through the second quarter when after St. Helena kicked a field goal, then recovered a fumble on the next kickoff. That set up a touchdown to make it 10-0 Saints, who go to 3-0.
NON LEAGUE
Clear Lake 13 South Fork 6
Balboa 54 St. Vincent 21
NCL III
Anderson Valley 60 Laytonville 8
Calistoga 60 Potter Valley 24
Tomales 34 Rincon Valley Christian 20
Point Arena (1-1) at Mendocino (1-2) (No report)
Upper Lake (2-1) BYE
Anderson Valley and Calistoga are tied for first at 4-0. Tomales is 3-1 and hosts Upper Lake next week.
Mendocino had a homecoming to remember, or to forget. Their game with Point Arena was postponed because there were no officials.
JC
No 18 Laney 31 No. 24 SRJC 20
SRJC was behind 31-7 and did all its scoring in the fourth quarter.
The Bear Cubs are 2-2 and go to Sequoias next Saturday.
My email address is jacpasquini@comcast.net
Share