FOOTBALL RECAP: ANALY WINS ONE FOR THE AGES 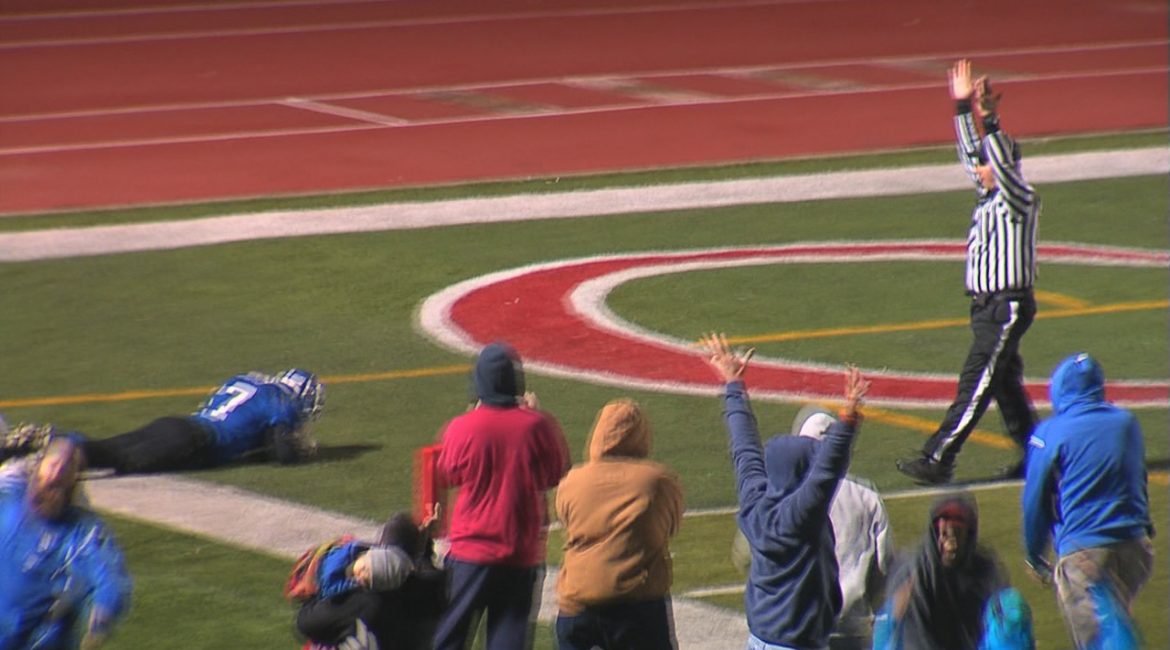 This year’s version of the KSRO Game of the Week didn’t always have the most exciting of games. The opening broadcast was a 35-34 St. Mary’s of Stockton win over Cardinal Newman. That game was decided when Cardinal Newman failed on a two point conversion with no time left.
That didn’t exactly start a pattern. If there was a one sided game to be found, KSRO found it. Outside Cardinal Newman’s 42-35 win over Rancho Cotate, the games were not very close. There were scores like 47-14, 41-13 and 62-27 etc. etc. etc. Even the Cardinal Newman-Rancho Cotate game had a 21 point difference with four minutes to go. Of course you could say that is high school football in this area. It isn’t that easy finding a close game.


The final Game of the Week presentation between Analy and Petaluma had the headline for the Sonoma County League championship. But the general feeling was it would turn into like most of the other games that were on the radio.
What it turned into was a game for the ages, that wasn’t decided until the last play of the game One of the most shocking things about the game, was that it was decided on the last play of regulation, as it had overtime written all over it.
Analy was sitting on the Petaluma 46 yards line with five second left. There was time for one play and what a play it was, as Jack Newman hit a Hail Mary pass to Ross Simmons to give Analy a 42-36 win. In a year of one sided games, forfeits and other bad news that seem to go with this season, this was about as good of a commercial as you can have for High School Football.
It appeared for most of the fourth quarter that if any team would win it in regulation, it would be Petaluma. After tying the game with a two point conversion with 9:06 left, they forced an Analy punt. The Trojans then proceeded to eat up the next eight minutes of the clock. Then they really rolled the dice, going for a 4th and 11 from midfield that they didn’t come close to converting, and turned the ball over to Analy with fifty nine seconds left.
Analy spent the next fifty four seconds not doing much. The Tigers gained seven yards in three plays, before winning it with the bolt of lightning. On the play, it didn’t look like Petaluma practiced the prevent defense too often. Looking at the video that was posted here on YSN365.com, there was only one defender within ten yards of the catch. The coverage by that one man was there, but for most Hail Mary’s it is a battle between around a half a dozen players.
The video also showed that it was a close call for the touchdown. If there was a replay system, there probably wasn’t enough evidence to change the call on the field, but the same thing could be said if he would have been called down, it was that close.

The play ended a game that saw a see-saw first half, Analy took control in the third, before Petaluma rallied. After a semi-defensive start, the team traded scores throughout the first half. After failing on its first extra point, Petaluma started going for two after every score the rest of the game. Analy carried a 7-6 lead into the second quarter and the team traded touchdowns on four straight possessions to make it 22-21 Petaluma at the half.
In the third quarter, it appeared things were slipping away from Petaluma. A fumble on the first drive and an interception on the second, set up two Analy touchdowns and with 5:57 left in the quarter the Tigers appeared to be in control, 36-22.
Petaluma responded with a touchdown with :39 left in the quarter and then pulled off a successful onside kick to set up another with 9:06 to go. Petaluma failed on the two point conversion after touchdown number one, and was successful after touchdown number two which made it 36-36.
As you might guess by the score, it was an offensive show. The two teams combined for around 800 yards, doing it their own way. The last play put Newman over the 300 yard mark and was his fourth touchdown pass, which gives him 39 for the season.
Petaluma rushed for over 400 yards with Brenden White and Lucas Dentoni combining for 300.
As the stats become official, there will probably be a few players on the Honors List that is posted on Wednesday from this game.
Bottom line: Analy ends the regular season 10-0 and wins its fourth straight SCL championship. Petaluma has a seven game winning streak snapped and falls to 7-3.
The real bottom line is- that was one heck of a high school football game. Maybe if the powers were quicker with realignment, there would be more like that.
Well actually not more like that. The game is in a class not to many games are in.
NORTH BAY LEAGUE
No. 1 Cardinal Newman 31  No. 7 Windsor 13
No. 8 Maria Carrillo 32  Ukiah 12
No. 6 Rancho Cotate 49  Santa Rosa 14
Casa Grande 41  Montgomery 17
Cardinal Newman wraps up a perfect 7-0 run through league play.
The games went as expected. We will see how that plays out on Sunday for seeding and home games.
SONOMA COUNTY LEAGUE
No. 5 Petaluma vs. No. 2 Analy 42
Sonoma Valley 48 Elsie Allen 20
No. 10 Piner 42 El Molino 6
Healdsburg BYE
Sonoma Valley became NCS eligible with the win.
Some of the teams don’t have that hot of records, but five of the seven teams are eligible for a playoff spot.
NCL I
No. 3 Fort Bragg 41 Cloverdale 0
No. 4 St. Helena 35 Willits 20
No. 9 Middletown wins by forfeit over Clear Lake
Kelseyville 27 Lower Lake 14
Fort Bragg finishes off the league championship and finishes 10-0 for the first time in school history.
Seven of the eight teams are playoff eligible.
BAY FOOTBALL
St. Vincent 26 Emery 8
St. Vincent ends 2-2 in league play and qualifies for a NCS Division 5 playoff spot.   According to reports they have decided not to apply.
NCL III
REDWOOD BOWL
Anderson Valley 32 Upper Lake 18
Anderson Valley gets revenge for its only league loss and ends the season 9-1.
JUNIOR COLLEGE FOOTBALL
No. 14 SRJC 50 Foothill 13
SRJC is 6-3 overall and 3-1 in conference play. They go into the last week of league play tied with San Mateo for second place one game behind first place San Francisco. San Francisco is at San Mateo next week.
SRJC hosts Diablo Valley next Saturday at 5 pm.
My email address is jacpasquini@comcast.net
Follow me at twitter @homer2612
Share