FOOTBALL RECAP: Casa Grande Gets a Win, SRJC Gets a Big Win 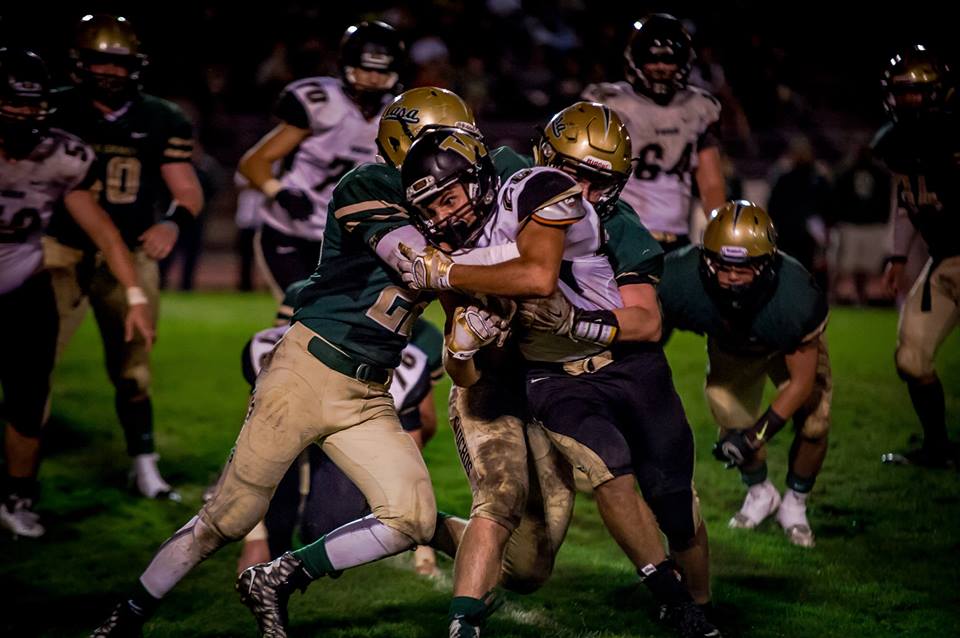 The memo was out- “when playing Casa Grande, ignore their record.” At least that has been the case the last two seasons.


Windsor must not have gotten the memo. Casa Grande scored a defensive touchdown in the first minute of the game and went on to defeat Windsor 21-20 to record its first win of the 2015 football season.
To be fair Windsor did have the memo. But the game got off to a disastrous start. Nic Petri returned an interception 30 yards for the first score of the game and the tone was set. In a game in which each defense shined, it was an apropriate kind of start. Windsor played catchup the rest of the game, and just missed pulling it off in the end.
Casa Grande took a 14-0 lead in the second quarter on a touchdown pass by JJ Anderson. The touchdown was set up on a 37 yard run by Holton Johnson on a fake punt.
Windsor followed that up with a 10 play 70 yard drive that ended with Max Brown hitting Curtiss Johnson on a 16 yard scoring toss to cut the lead to 14-7. It was Johnson’s fifth touchdown catch of the season.
As they had to start the game, Casa Grande had a bolt of lightning to start the third quarter. This one was on offense, a 65 yard scoring pass from Anderson to Kaleo Garrigan. It was Garrigan’s fifth touchdown reception of the season.
Windsor then made its big run, scoring a touchdown in each the third and fourth quarters. Brown scored from one yard out to cut the lead to 21-20 with 2:57. Windsor went for two and tried a trick play. Running back Jackson Baughman took a hand-off and then threw a pass which was knocked away. Windsor would get the ball back but didn’t have enough time to do anything and Casa Grande had its win.
Last year Casa Grande turned a 0-5 start, into a NCS playoff spot. This season they start the push a little earlier.
SRJC HAS ONE SIDED WIN
Don’t try to figure out SRJC, just put the seat belts on.
One week after playing its worst game of the season, they played their best, going on the road to defeat No. 6 Sequoias 44-0. It is the first loss for Sequoias in five games. SRJC raises its record to 3-2.
Quarterback Vincent Jefferies threw for 291 yards and two touchdowns. LaRenzo Sterling caught four of the passes for a team high 108 yards and one of the touchdowns. Sterling has hit the 100 yard mark in two of the last three games.
Former Analy star Ja’Narrick James rushed for two touchdowns and scored another on a 63 yard punt return. James’ second touchdown came on a one yard run early in the third quarter which gave SRJC a 23-0 lead.
The SRJC defense gave up a season low 263 total yards. That is even though they gave up over 100 yards rushing for the first time since the opening game loss to San Joaquin Delta. In the last three games they gave up a combined 89 yards on the ground.
The defense had its best game stopping the pass. After giving up over 300 yards in each of the last two games, the Sequoias quarterbacks were a combined 13 of 38 for 136 yards. The busiest player for Sequoias was Ruben Chavez who punted ten times.
SRJC takes a week off before opening up Bay 6 Conference play in two weeks. The first two conference games are home against San Mateo and San Francisco. Both teams won yesterday and are 4-1 on the season.
NORTH BAY LEAGUE
No. 2 Cardinal Newman 47 No. 6 Maria Carrillo 14  WATCH VIDEO HIGHLIGHTS
No. 3 Rancho Cotate 35 Montgomery 14
Casa Grande 21 No. 7 Windsor 20
Ukiah 22 Santa Rosa 6
The big game is set up. It is Rancho Cotate at Cardinal Newman next Friday Night. Broadcast time on KSRO 1350 and 103.5 FM is 6:35.
After only two weeks of league play, they are the only teams left undefeated in the NBL race.
SONOMA COUNTY LEAGUE
No. 1 Analy 54 Sonoma Valley 7
No. 8 Petaluma 29 Piner 22
Healdsburg 68 Elsie Allen 13
El Molino (0-4) BYE
Healdsburg and Petaluma are tied for first at 2-0. Analy is 1-0.
Petaluma won a thriller over Piner. Lucas Dentoni scored from 18 yards out for the game winning score, with 6:43 left.
Luke Wheless returned a kickoff 93 yards to give Petaluma a 21-7 lead in the second quarter. Piner rallied to take a 22-21 lead in the fourth quarter. Dentoni’s touchdown gave Petaluma back the lead. Piner had a 50 yard touchdown pass called back by a holding penalty with four minutes left.
Cody Koch caught two touchdown passes as Healdsburg beat Elsie Allen.
NCL I
No. 4 St. Helena 41 Willits 8
No. 5 Fort Bragg 54 Lower Lake 9
No. 10 Middletown 43 No. 9 Willits 8
Cloverdale 48 Clear Lake 14
It was a night of one sided game.
Middletown had the most eye opening win, going on the road and handing Willits its first loss of the season.
Coleman Drew rushed for 179 yards and four touchdowns. Ty Chorjel added two touchdowns on a night Middletown rushed for over 350 yards.
St. Helena, Fort Bragg and Middletown are 2-0 in league play. St. Helena and Fort Bragg are overall 5-0.
For the first time since the Valley Fire, Middletown is home the next two weeks. It isn’t an easy home stand with Fort Bragg and St. Helena coming to town.
BAY FOOTBALL
St. Vincent (1-4) BYE
NCL II
Anderson Valley 50 Rincon Valley Christian 13
Upper Lake 44 Tomales 16
Point Arena 62 Potter Valley 42
Laytonville 42 Mendocino 12
Calistoga Bye
Anderson Valley, at 5-0, has a half game lead over Calistoga. That is because they have played one more game than Calistoga who is 4-0.
Upper Lake and Point Arena are next at 3-1.
Point Arena’s win over Potter Valley was the highest scoring game of the season. Each team had over 300 yards in rushing offense. The difference was Point Arena had a passing game. Junior Brett Holguin threw for 197 yards and four touchdowns.
JC
SRJC 44 No. 6 Sequoias 0
My email address is jacpasquini@comcast.net
Share