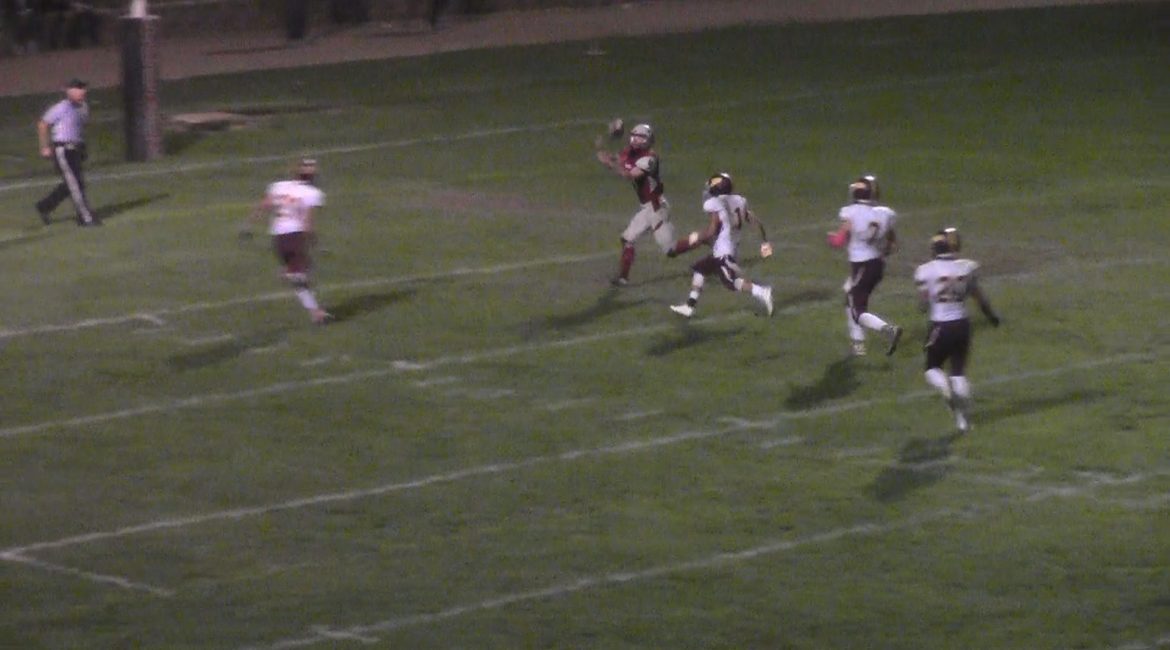 It wasn’t the offensive show that was expected. It was basically ignored that while Fort Bragg and St.Helena were roaring through the NCL I race, each team had a defense to go with its high powered offenses. Both defenses showed that and when the dust cleared, the Fort Bragg offense did more and took a 27-14 win in a game between two 8-0 teams.
Before moving to the story about this game, first a correction. In the preview I talked about this being a rare game having two 8-0 teams meet. It was, but in my list of close calls I missed the most recent one. In 2011,  Cardinal Newman met Rancho Cotate and both teams were 8-0. Rancho Cotate took a 21-14 win. Both teams would only lose again in the NCS playoffs.
Now back to this game between 8-0 teams. The game made it through the first quarter scoreless and it appeared it was going to make it through the first half that way. The two teams combined for seven punts and six turnovers in the first half. The last turnover set up the first score.
Ty Sutton’s first interception of the season set Fort Bragg up. The defensive tone of the game continued, but finally on a 4th and goal from the 9, Sullivan hit Lucas Triplett for a 7-0 halftime lead. It was the 16th time this season the two had connected on a touchdown pass.
The third quarter was the closest to the wide open game that was predicted. Each team scored two touchdowns in the quarter. It was a special teams play that started the fireworks. Reeves Basile returned a punt 70 yards for St. Helena to tie the game at 7-7.
That seemed to wake the Fort Bragg offense up. On the next play, Sullivan hit Tyler Baker on a 65 yard score on a play that turned out to give Fort Bragg the lead for good. Sullivan hit Baker on another touchdown pass to make it 20-7. Baker is a good compliment to Triplett for this offense. The two touchdown catches, which were his only catches of the night, gives him eight on the season.
Sullivan didn’t have his best game of the season passing. He had fourteen completions, which was his second lowest number of the season, for 256 yards and three touchdowns, along with two first quarter interceptions.
What Sullivan did do was have his best rushing game of the season. He repeatedly frustrated the St. Helena pass rush by scrambling out of trouble and gained a season high 113 yards. His five yard run with 3:21 left was the last score of the game and basically put it away.
St. Helena played the game without its leading rusher Jahaiver Otero, who was out with an injury and struggled on offense all night.
The win sews up at least a tie for the NCL I championship for Fort Bragg. This win, along with the Cloverdale loss to Middletown, actually cinches the league champion designation for Fort Bragg in the NCS playoffs.
Heading into the last week, Fort Bragg has a one game lead over St. Helena, so St. Helena could still get a co-championship. Next week Fort Bragg hosts Cloverdale, while St. Helena goes to Willits.
SCOREBOARD
NORTH BAY LEAGUE
No. 1 Cardinal Newman 47 Montgomery 3
No. 8 Windsor 29 No. 6 Maria Carrillo 7
No. 7 Rancho Cotate 56 Ukiah 13
Casa Grande 56 Santa Rosa 21
Cardinal Newman wins its first outright championship since 2011. The Cardinals tied for the title with Rancho Cotate last season.
It is Cardinal Newman’s sixth league title since Paul Cronin took over the program in 2003.
The biggest impact on the playoffs might be Windsor’s win over Maria Carrillo. The NCS committee loves head to head, probably a little too much. Now they have to sort this out. Windsor beat Maria Carrillo, who beat Casa Grande, who beat Windsor.
SONOMA COUNTY LEAGUE
No. 2 Analy 61Elsie Allen 0
Piner 62 Healdsburg 27  WATCH VIDEO
Sonoma Valley 34 El Molino 28
No. 2 Petaluma (BYE)


The Analy win sets up the SCL championship game next week against Petaluma. That game is Friday at 7:30 at Rancho Cotate High School. It will also be the KSRO Game of the Week.
The win by Piner qualifies them for the Division 3 playoffs. They defeated Healdsburg behind a big rushing game by Jose Ramirez, who rushed for 324 yards and six touchdowns.
For the second straight week, Sonoma Valley rallied in the fourth quarter and Max Yankovich scored the winning touchdown. This time it was a 23 yard run with 1:59 left. After an 0-7 start, the Dragons have won two straight.
NCL I
No. 4 Fort Bragg 27 No. 3 St. Helena 14
Middletown 13 No. 9 Cloverdale 0
Willits 14 Lower Lake 12
Kelseyville 26 Clear Lake 16
The Middletown-Cloverdale game was almost as big playoff wise as the Fort Bragg-St. Helena game. Both teams are in Division 5 and Cloverdale in one projection was a No. 1 seed.
The win qualifies Middletown for the NCS playoffs.
BAY FOOTBALL
Valley Christian 57 St. Vincent 0
NCL III
Anderson Valley 44 Tomales 6
Point Arena 48.Calistoga 26
Rincon Valley Christian 57 Potter Valley 6
Upper Lake over Laytonville by forfeit
Anderson Valley and Upper Lake ends up co-championships and will meet in next week’s Redwood Bowl, which is between the two top teams in league race.
Good weekend for Upper Lake who got the forfeit win, but still needed help to qualify for the Redwood Bowl and they got it from Point Arena. Had Calistoga won that game there would have been a three way tie and Upper Lake lost out on that because of numbers drawn before the season began.
Because of those drawn numbers, the Redwood Bowl will be played at Anderson Valley.
JUNIOR COLLEGE
No. 15 SRJC 10 DeAnza 8
The defense won this game for the Bear Cubs.
First it scored the only touchdown on a 32 yard interception return by Ethan Rosselli in the first quarter.
Then leading 10-3 with ten minutes left, on a second and goal SRJC fumbled the ball at the one. One play later, DeAnza hit a 98 yard pass play that went from one one yard line to the other. After that De Anza went backwards and was held to a field goal.
SRJC is 5-3 over and 2-1in league play. They are on the road next week at Foothill who is 0-8 on the season.
My email address is jacpasquini@comcast.net
Share