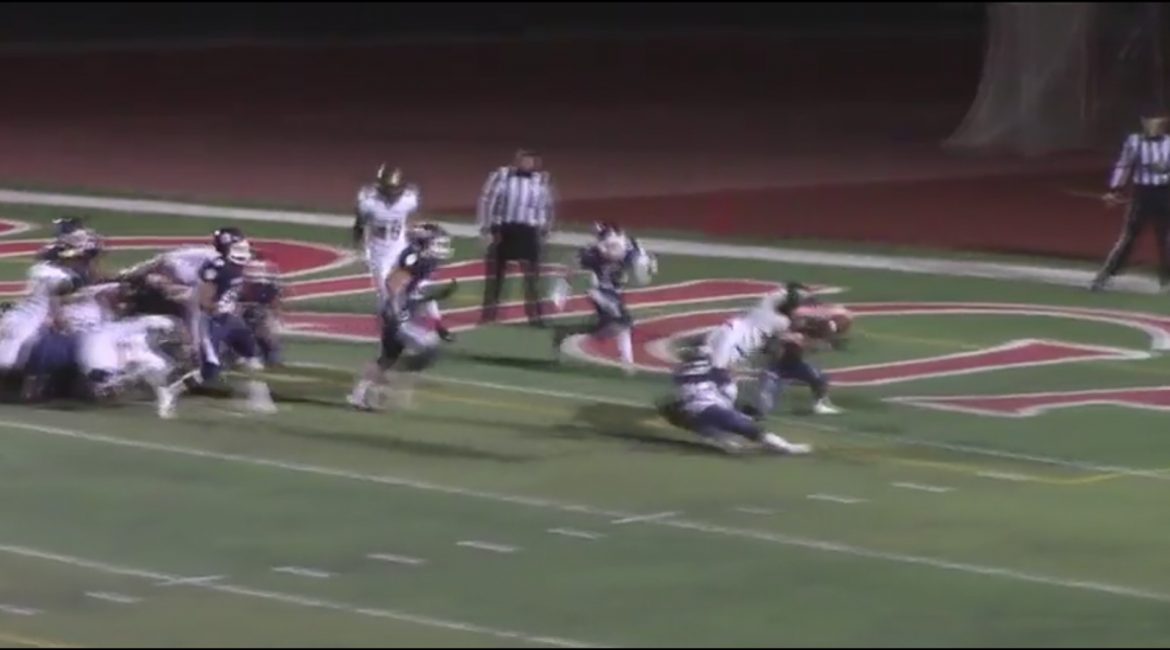 Maria Carrillo defeated Rancho Cotate 36-35 in what has to rate as the upset of the year so far in local high school football.
Or is it?


Since upsets don’t happen too often, it probably is.  Just how big of an upset this is, can be up for debate. It is the second straight season that Maria Carrillo has beaten Rancho Cotate. The last time Rancho Cotate lost a regular season home game was on October 9th, 2009. Maria Carrillo beat them that night 35-25. Since then the series has been closer than you might guess, with three of the four Rancho Cotate wins by 14 points or less and one of those in overtime.
Maybe Rancho Cotate doesn’t have an answer for the Maria Carrillo’s Wing-T offense. They sure didn’t this night. Running backs Josh Groesbeck and Cole Martin combined to rush for over 400 yards by themselves. They piled up those numbers without completing a pass.
Martin rushed for 178 yards on twenty carries and a scored one touchdown.
Groesbeck rushed for 238 yards on forty carries and scored the other four Maria Carrillo touchdowns.
Groesback’s last touchdown came with twenty eight seconds left to make it 35-34. Maria Carrillo went for the win and Groesbeck ran it in for the winning points.
Rancho Cotate had taken a 35-28 lead with four minutes left. It was Rancho Cotate’s first lead since 6-0. Maria Carrillo scored two straight touchdowns to take a 14-6 lead late in the first quarter, which was the biggest difference of the night. After that the game was tied at 14, 21 and 28. The two teams combined for five fourth quarter touchdowns.
Rancho Cotate played most of the second half without its star receiver/defensive back Chris Taylor-Yamanoha. In the early third quarter, someone’s cleat came down on his finger and cut it badly. He was immediately taken to the hospital, where he was diagnosed with a dislocated finger. The hope is he will be back next week. Taylor-Yamanoha caught a touchdown pass that was the first score of the game and also caught a two point conversion.
Maria Carrillo is 4-3 on the season and at 3-1 is in a three way tie for second in the NBL race.
NORTH BAY LEAGUE
No. 1 Cardinal Newman 41 No. 7 Casa Grande 13   Watch Video Here
No. 9 Maria Carrillo 36 No. 3 Rancho Cotate 35
No. 8 Windsor 38 Santa Rosa 14
Montgomery 24 Ukiah 21
Montgomery got its win. An 18 yard field goal by Jordan Paige with 1:11 left was the game winner.
The difference was the Montgomery defense, who shutout Ukiah in the second half. Not only that, the defense scored a touchdown on a 34 yard interception return by Malik Telcy.

The other two NBL games were one sided.
Cardinal Newman scored three touchdowns in a 1:24 span in the first quarter to take a 21-0 lead. Quarterback Jordan Brookshire threw two touchdown and ran in one more. Brookshire also had a blocked punt. All of Cardinal Newman’s points came in the first half.
Cardinal Newman has won four straight and are 5-2 on the season.
Windsor led Santa Rosa at the half 31-7 to raise its record 5-2. Anthony Rea returned an interception 64 yards for one score and caught one of Max Brown’s two touchdown passes for another.
At 4-0, Cardinal Newman has a one game lead over Maria Carrillo and Windsor.
SONOMA COUNTY LEAGUE
No. 2 Analy 67 Healdsburg 6
No. 6 Petaluma 48 El Molino 6
Piner 30 Sonoma Valley 14
Another pair of one sided wins for the league leaders to move one week closer to the November 6th showdown between Analy and Petaluma, which is looking more and more like it will be for the SCL championship.
Schuyler Van Weele returned the opening kickoff 80 yards to get Analy going. Van Weele also caught two touchdown passes.
Petaluma had six rushing touchdowns, three each by Lucas Dentoni and Luke Wheless. Dentoni also returned a blocked field goal for a score.
In the Piner win, Jose Ramirez rushed for 150 yards and two touchdowns. Piner scored the first 23 points of the game to move to 4-4 overall and 2-2 in league play.
NON LEAGUE
Emery 35 Elsie Allen 7
NCL I
No. 4 St. Helena 28 No.10 Middletown 0
No. 5 Fort Bragg 57 Kelseyville 24
Cloverdale 47 Willits 30
Lower Lake 32 Clear Lake 23
Two weeks to go.
St. Helena and Fort Bragg both go to 7-0.
Niko Lopez rushed for three touchdowns to lead St. Helena. St. Helena pulled away with three fourth quarter touchdowns.
Fort Bragg scored 34 in the second quarter to pull away from Kelseyville. Kaylor Sullivan passed for 500 yards and eight touchdowns. It is the second time this season he has hit the 500 yard mark. Fort Bragg led at the half 48-17. The second half scoring for both teams was in the fourth quarter.
Next week St. Helena has a home game with Clear Lake and Fort Bragg travels to Willits. In two weeks Fort Bragg travels to St. Helena.
Cloverdale, whose only league loss is to St. Helena, led Willits 41-12 after three.
Running back Luke Bernardi rushed for a season high 254 yards and four touchdowns. It is the second straight game Bernardi has hit the 200 yard mark and puts him over 900 on the season.
Sophomore Hokulani Wickard passed for 256 yards and a touchdown. He also ran one in as Lower Lake defeated Clear Lake.
BAY FOOTBALL
Stellar Prep (Oakland) 47 St. Vincent 22

NCL III
Anderson Valley 44 Calistoga 24
Laytonville 38 Potter Valley 12
Point Arena 44 Rincon Valley Christian 28
Upper Lake 38 Mendocino 14
First of all apologizes for not at least including this league in the preview for the last two weeks. After leaving the league out the first week, I thought it won’t happen again. Then it happened it again. I could come up with a lame excuse on how busy I am, but the truth is I screwed up …twice.
What really is bad about leaving them out is this has turned into the best race in the area. Anderson Valley handed Calistoga its first loss of the season. Four teams have one league loss with two weeks to go.
The four teams are Anderson Valley, Calistoga, Upper Lake and Point Arena who have from one to three games remaining. Point Arena meets Upper Lake and Calistoga the next two weeks.
JUNIOR COLLEGE FOOTBALL
No. 11 SRJC 17 No. 5 San Mateo 14   WATCH VIDEO HERE
The Bear Cubs open up league play with a huge win. Details on another post.
My email address is jacpasquini@comcast.net
Share