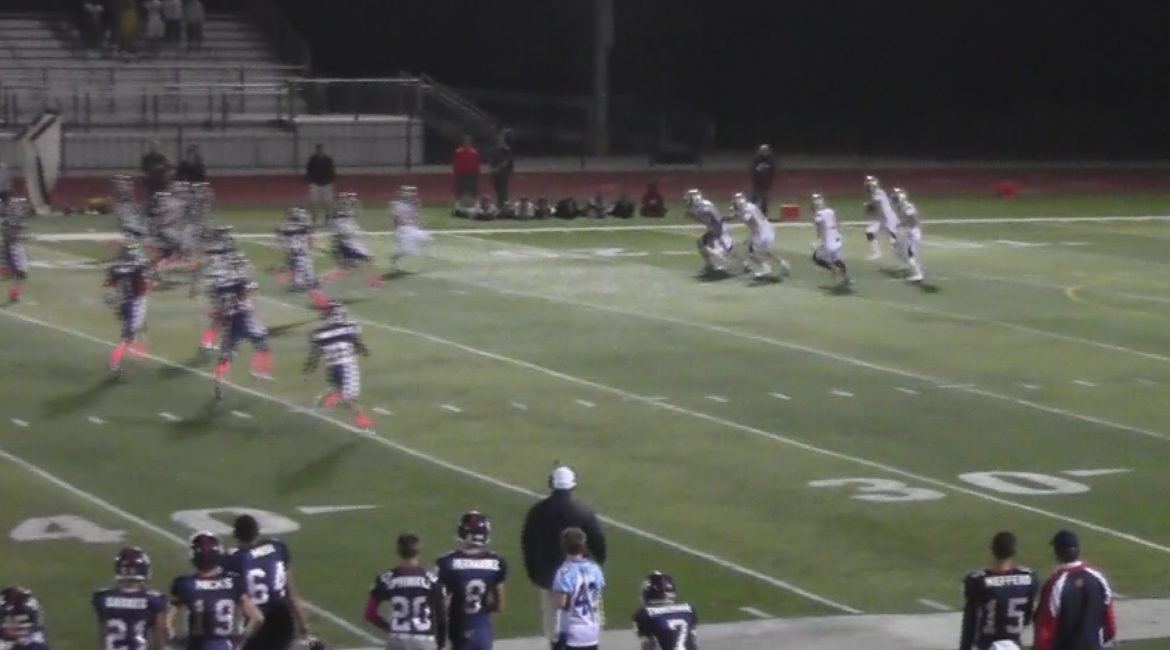 
Before the football preview, here is a YSN365.com high five to the four volleyball teams who will be playing for a NCS Championship on Saturday.
Good luck to all of you.
Now on with the preview:
During the regular season, occasionally the previews have had a theme.
It could have been a showdown week or looking for an upset week.
With the beginning of the second round of the NCS playoffs, the NBL fans are looking for it to be an upset week.
Three NBL teams are in action.
All three teams are on the road.
All three teams are underdogs.
One is in Division 2 and the other two in Division 3.   Seeding wise two games are 1 vs. 8 and the other 2 vs. 7.
The recent history tells us this isn’t going to be easy.
Actually, going against the No. 1 seed there seems like a little hope.  Since 2008, the No. 1 seed is 26-1 in the second round.  The only loss was in 2009 when No. 9 Justin Siena edged St. Mary’s 22-21.
There is a little more hope against the No. 2 seed, so Rancho Cotate fans perk up.  In the same time period the No. 2 seed is 22-6.   The losses mainly came in Division 1 where No. 2 is 3-3 and Division 4 where they went 3-2.
The other No. 2 seed that lost was in Division 2 (this is another reason for Rancho fans to perk up).  That season Rancho Cotate was in Division 2, like they have been every other season until this one.  That year in the semi-finals Concord defeated Rancho Cotate 24-14, before losing to Windsor in the championship game. The week before as a No. 7 seed Concord defeated the No. 2 seed 42-16.  The No. 2 seed that year was Las Lomas.
So the odds are against the local teams in these games, but there is hope
This is the Friday preview.  The Saturday schedule is also here.
Tomorrow there will be a full Saturday preview.

No. 10 Granada (3-8) at No. 2 Concord (10-1)
CALPREPS PROJECTION: Concord by 23
Montgomery is coming off a first round 42-34 overtime win over Mt. Eden.  It is one of the good playoff wins for a school who has had its share of good playoff wins over the years.
After they won the classic game, some of them might have been thinking, we did that for this.
This is a trip to Clayton Valley to meet a team that was crowned NCS Division 2 champion by the experts before the season even started.  Since then they have basically gone out and proven that they deserve that tag.
Clayton Valley has barely broken a sweat in going 11-0.   They have won nine games by at least 21 points and eight of those by at least 40.  The only two games they didn’t win by three touchdowns was a 28-21 win over Tracy in Week 2 which had people worried that they might have overrated this team.  The other one was a 48-40 win over crosstown rival Concord which decided the Diablo Valley League championship.   Concord is as big of favorite to meet Clayton Valley in the championship game, as Clayton Valley is to win it.
Along the way, Clayton Valley defeated Cardinal Newman 42-21 in a game that wasn’t as one sided as the score might seem.  That is one of two common opponents that Clayton Valley and Montgomery have and neither helps you feel good about Montgomery’s chances.  On Halloween night, Montgomery was defeated by Cardinal Newman 52-13.
The other comparison isn’t much better.   That was against Napa. On September 26th, Clayton Valley took a 54-14 win.  In the season opener, on August 30th, Napa defeated Montgomery 36-7.
One hopeful sign is leading rusher Miles Harrison has been out most of the last three weeks with a foot injury.  On the season he has rushed for over 1,500 yards and 21 touchdowns including a 336 yard, five touchdown game against Concord.  In the opening playoff game he only went for 35 yards on two carries and a touchdown.   Clayton Valley didn’t miss a beat as Nate Keisen threw three first half touchdowns and the team rushed for over 400 yards in a 61-7 win over Newark Memorial.   It is the third time this season that they have scored at least 60 points.  Three other times they have hit 50. On average they have outscored opponents 56-14.
It will take a near perfect game for Montgomery to stay within what the Cal Preps projected score is.  If they somehow pull off an upset it will be talked about forever.
But let’s leave this preview with some bright news and that is some information on the overtime win over Mt. Eden.
Ke’shawn Walker was under serious consideration for Player of the Week.  He rushed for 190 yards and two touchdowns and had another 54 yards receiving.  Walker needs 33 yards to reach 1,000 yards on the season.
Also quarter RJ Flores threw for 191 yards and three touchdowns including the game winner in overtime.  The three touchdown passes is his second most of the season.
SATURDAY (7 PM)
No. 5 Casa Grande (5-6) at No. 4 Maria Carrillo (7-4)
KSRO 1350 AM/103.5 GAME OF THE NIGHT
CALPREPS PROJECTION: Maria Carrillo by 3

No. 11 Pinole Valley (5-6) at No. 3 Windsor (8-3)
CALPREPS PROJECTION: Windsor by 23
DIVISION OVERVIEW:   KSRO 1350 AM/103.5 FM is broadcasting the Casa Grande-Maria Carrillo game.  The station is also broadcasting a Friday Night game (see below)…The NCS scheduling for this bracket is strange in an attempt to draw crowds.  They have Clayton Valley and Concord, who are about three miles away from each other, playing on the same night.  Meanwhile on Saturday, the three Sonoma County teams (Analy included) have home games. You would think they would separate those games to different nights.

No. 7 Rancho Cotate (8-3) at No. 2 Las Lomas (9-2)
KSRO 1350 AM/103.5 FM AND YSN365.COM GAME OF THE NIGHT
CALPREPS PROJECTION: Las Lomas by 13
As the numbers above say, this doesn’t look to good for the Co-Champions of the North Bay League.
Then again it depends what numbers you look at.
The power rankings have these games far from 1 vs. 8 and 2 vs. 7.
In fact, the Division 3 rankings have the Campolindo-Cardinal Newman game a No. 1-No. 2 matchup (Campolindo is No. 1).   Meanwhile the Rancho Cotate-Las Lomas game is between No. 4 and No. 5.   Believe it or not, Rancho Cotate is No. 4.  Analy is in between Cardinal Newman and Rancho Cotate at No. 3, but more about them in the Saturday preview.
Now we knew that the seedings were flawed, but this weekend we will find out how much we really knew.
Okay before going too crazy here, there was no doubt at any point in this season that Campolindo would be the No. 1 seed.    They were predicted to be No. 1 at the beginning of the season and did nothing to lose it.  They are ranked in the top five in the regional rankings and are almost as big a favorite to win this Division as De La Salle and Clayton Valley are to win theirs.
This is the second straight season that Campolindo has gone into the playoffs undefeated.   Last season they lost to Marin Catholic in the Semi-Finals.  Over the last four seasons they are 45-4, which includes the 2011 North Coast Section Championship.  That year they lost the state championship game.
This year they have been balanced on offense, almost 50-50.  Quarterback Jack Stephens passed for nearly 2,300 yards with 23 touchdowns.   Running back Nick Fadelli rushed for nearly 1,400 yards and 24 touchdowns.
Campolindo has outscored its opponents on an average of 47-17.  They were dominating except for one game.  That was against Las Lomas, who finished second in their league.  Las Lomas had a 28-7 lead in the second quarter before Campolindo rallied for a 38-28 win.
Speaking of Las Lomas, besides the loss to Campolindo, the only other loss was to San Ramon Valley 44-17 in the season opener.  Besides that, the numbers for Las Lomas haven’t been as good as Campolindo’s, but they are in the neighborhood.  Actually in the rest of the league games they are a little better.
Las Lomas runs more than they pass.  The running game is led by Zack Fulks, who has rushed for over 1,400 yards and 22 touchdowns.
Las Lomas is used to being a playoff team.  They have been one since 2006.  They have something in common with Rancho Cotate, that is that this is the first season in Division 3.  Like Rancho Cotate up until last season they were in Division 2.  They have met up before.  Rancho Cotate won 21-14 in 2012. Las Lomas won 21-17 in 2008.
This has been quite a week for Rancho Cotate’s Chris Taylor-Yamanoha.   It started last Friday when he made a nice one handed catch in the playoff win over Kennedy of Fremont.   It was such a nice catch that YSN got the video of it and put it on this website.
You would think things couldn’t  get better than that, but they did.   First, over the weekend he took a recruiting trip to Boise State.  Then two days later, Louisville knocked on his door and offered a full ride.  That is one happy family.   Chris’ mom is a graduate of Louisville herself.  You know the most important thing at least at that age, keep mom happy.
Actually, Taylor-Yamanoha, who is a junior, still hasn’t made a decision.  That can wait and it appears he will have a few choices.  Right now the focus is ending a very good week, helping his team continue its season.
SATURDAY
No. 5 Acalanes (8-3) at No. 4 Analy (10-1)…7 PM
CALPREPS PROJECTION:  Analy by 7

No. 6 Alhambra (8-3) at No. 3 Marin Catholic (8-3)…1 PM
CALPREPS PROJECTION: Marin Catholic by 13
DIVISION OVERVIEW:  The bracket went right to the seedings in the first round.  That is the only Division that went that way.  The Division is considered the toughest in the section.  The eight teams are a combined 70-14. Second is Division 4 at 64-23.

No. 5 Stellar Prep (8-3) at No. 4 Middletown (8-3)
CALPREPS PROJECTION: Middletown by 7
St. Helena continues its turnaround.   From 2007-10, they finished .500 or less.  Since then they have been one of the dominant teams in the area, going 41-7 over the past four years.   It each of those years they have won at least one playoff game and they kept that streak going alive last week with a 45-18 win over South Fork.
They meet a St. Vincent/St. Patrick team, that is one of six teams left in all the section playoffs under .500.  The No. 11 seed is the highest that survived the first round.
St.Vincent/St. Patrick is in the Tri-County-Rock League, which has the No. 1 seed in Division 4 and 5.
The Bruins started the season 0-4, with one of the losses 14-13 to Vallejo, which was its only win of the season.
It is a program that had some success towards the latter part of the decade, the last couple of years, not so much.  Their record is 13-28 over the last four seasons, which includes a 1-9 mark in 2012.  The 14-6 win over John Swett was their first playoff game since 2009.
Middletown is another familiar fixture in the playoffs.  This is their seventh straight year and the fifth year they have won at least one game.
This is the third football season at Stellar Prep.   They have come a long way fast.  The first two seasons they went 2-8.  During those two seasons they were part of the NCL II/Bay League.  That was the league that St. Vincent was the co-champion of both seasons, last year with Calistoga.
Stellar Prep started the season with two losses.  Since then they have won eight of nine.
.
SATURDAY…1 PM
No. 9 St. Vincent (7-4) at No. 1 Salesian (8-2)
CALPREPS PROJECTION:  Salesian by 37

DIVISION OVERVIEW:  Salesian is considered the team to beat.   The defending champions had a first round bye.
Here is the rest of the schedule in Division’s that don’t have local teams:
DIVISION 1
FRIDAY (7 PM)
No. 9 San Ramon Valley (7-4) at No. 1 De La Salle (10-0)
CALPREPS PROJECTION: De La Salle by 43