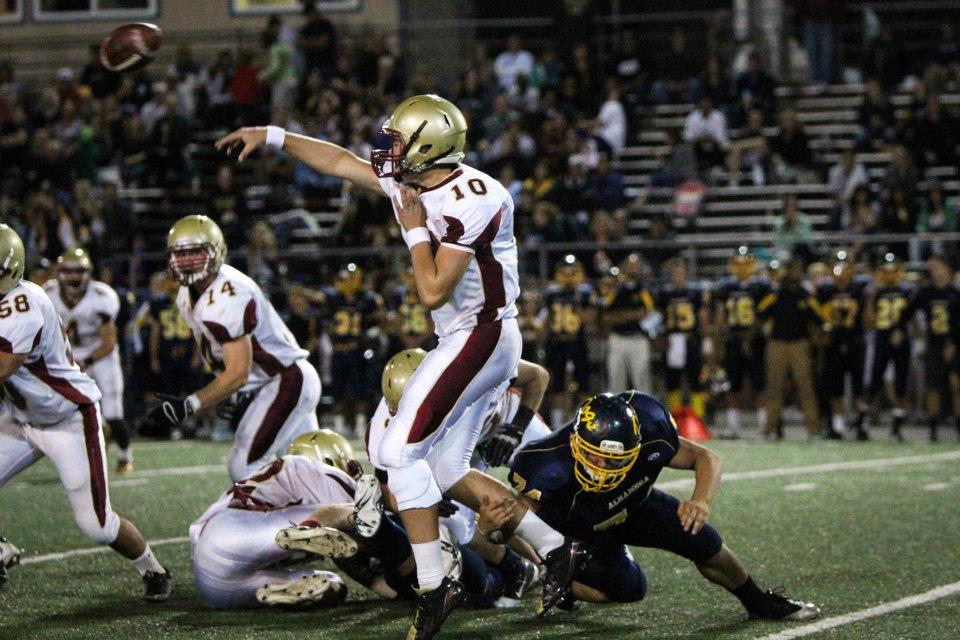 The North Bay League was close to having one of the most bizarre nights in league history, with unexpected results hanging in the balance.

Three favored teams were in a fight and had a scare, with one team having a major scare.

We almost had one of the all-time upset in local high school football history.

Montgomery, who was a 42 point favorite according to the Cal Prep Projection, survived against Ukiah to stay in the NBL race.

Each team scored a touchdown in each quarter and the first overtime and there were four lead changes, including the final Josh Lenney field goal which gave Montgomery the win in the third overtime.

Where this game came from is hard to explain.   Ukiah went into the game averaging 14 points a game and had scored more than 20 points once, in a 38-0 win over Willits the second week of the season.    They had scored 21 points combined in a 0-3 league start.

Despite all of that, there they were with an attempt to win the game in the second overtime.  After holding Montgomery when they had the ball, Ukiah made a questionable decision by attempting a field goal on first down and it was made even more questionable when they missed the kick.

In the third overtime Montgomery defense held.  There was no field goal attempt that time as Ukiah threw four passes incomplete. Then on Montgomery’s turn on fourth down, Lenney kicked a 21 yard field goal for the win and move its league record to 3-1, with two of the wins going overtime.

It was an offensive show with Ukiah Quarterback Cheyenne Noda, who was starting his second game, having over 300 yards in total offense.

Montgomery running back Logan Francavilla rushed for 162 yards to put him within range of the 1,000 yard mark on the season.

That game was part of an entertaining night in the North Bay League and was one of three games that had upset alerts that didn’t become upsets.

That included the undefeated win for Casa Grande over Rancho Cotate.  Don’t be fooled by the score.  Casa Grande went into the fourth quarter with an 18-13 lead and it was still only 21-13 with six minutes left with the Gauchos facing a 4th and 5 from the Rancho Cotate.   It appeared ever so briefly like the Rancho Cotate defense was going to hold on a sack, but Casa Grande quarterback JaJuan Lawson, as he is known to do, shook off a sack attempt and hit a 35 yard touchdown pass to a wide open Jonathan Weber to put the game away.

It was Lawson’s third touchdown pass of the game while he was passing for 240 yards.  Oh by the way he also had a run of 80 yards for another score.

Lawson’s 80 yard run came in the second quarter and it was one play after an 81 yard run by Rancho Cotate’s Michael Ross which gave the Cougars a 13-12 lead.

That was the way the game stayed until Matt Abramo kicked a 44 yard field goal on the first play of the fourth quarter.

That started an avalanche of points for Casa Grande which included a 40 yard interception return by Brad Freitas which came three plays after the Lawson touchdown pass that made it 28-13.   The 35 yard pass was the shortest of Lawson’s three touchdowns.

The win gives Casa Grande a 7-0 mark and keeps them in first place in the NBL race.

There was another upset brewing in the NBL, at least for a while.

Maria Carrillo jumped out to a 14-0 lead in the first quarter at Cardinal Newman and took a 20-7 lead with :14 left in the first half.  That was long enough for Kevin Lucey to return the kickoff 90 yards for a score which cut the lead to 20-14.

In the other game Colin McAlvain threw for 220 yards and three touchdowns as Windsor defeated Santa Rosa in a game they led 42-12 at the half.

Windsor is 4-3 on the season and they need one more win to qualify for the North Coast Section playoffs.   Windsor ends the season against Cardinal Newman, Casa Grande and Montgomery.

In the closest game of the night, Sonoma Valley held off Healdsburg to get a huge win.

Dan Deely passed for 250 yards and two touchdowns, both coming in the second quarter to give Sonoma Valley a 14-0 lead that they wouldn’t lose.  Deely also rushed for a game high 67 yards.   Both of his touchdown passes went to Ed Pomeroy who had six catches of the night for 128 yards.

The win gives Sonoma Valley a 5-2 record and makes the eligible for the NCS Division 3 playoffs.

Healdsburg drops to 4-4 and sets up a home playoff like game with Piner next week, a game that will be the KSRO Game of the Week.   Piner, who had a bye, is 3-4 on the season.  Both teams are in Division 4.

Meanwhile it was a normal SCL win for Analy as they led 42-0 at the half in its Annual Apple Bowl game with El Molino.  Kerr Johnson caught three touchdown passes, all of them in the first quarter, and Scott Hoffman ended the first half scoring with a 28 yard interception return.

Petaluma had the same kind of game against Elsie Allen, jumping out to a 42-0 halftime lead.  Donavan Reece scored the first and last touchdown of the half, with four different players scoring in between.

Petaluma is 4-4 on the season and needs one more win to be eligible for the North Coast Section Division 3 playoffs.  After a bye they end the regular season against Analy and Sonoma Valley.

It took Middletown longer than the other three leagues but they are in only undefeated team left in the NCL I race.

Middletown gave up its first defensive score since the season opener but take over sole possession of first place with the win over Kelseyville.

Kelseyville touchdown tied the game at 6-6 in the first quarter.  After that it was all Middletown who did a little of everything.  Josiah Adams passed for nearly 200 yards and three touchdowns, all of them to tight end Brad Bologna.  Austin Benson rushed for 126 yards and added two scores.

If it wasn’t for Middletown the NCL I would be a crazy race.   Four teams are sitting at 3-1 one game back.

Clear Lake went into the night at 3-0 but lost to St. Helena.  Jack Preston passed for 147 yards and two touchdowns and rushed for 111 yards and another score.

Most of Preston’s rushing yardage was on a 60 yard scoring play as St. Helena took a 21-6 halftime lead.

That was plenty for a defense that gave St. Helena 101 yards of total offense and four 1st downs.

Cloverdale made it three straight with a win over Lower Lake.  Josh Holden threw for one score and ran in another Luke Bernardi rushed for two scores.

Fort Bragg’s Zach Smith had his best game of the season rushing for 325 yards and four touchdowns in the win over Willits.

So looking at the standing makes it look like a race, but that appears to be a mirage.   Middletown has outscored league opponents by an average of 41-3 and defeated two of the 3-1 teams.  They meet the other two next with a trip to Cloverdale and a home game against Clear Lake.

There was some confusion in the schedule, but it turned out that all of the games in the league are on Saturday.

Three teams try to stay one game behind Calistoga, with two of them meeting each other.

SRJC is hoping the rankings are right and this is the toughest team in the Nor Cal League.

Thomas Stuart threw three touchdown passes and Kendal Williams rushed for 131 yards and a score as Butte goes to 6-0.  The No. 1 ranked team in the state has hit the 40 point mark in all six games.

SRJC did hang around for a while.  Spencer Morrow scored from 7 yards out to cut the lead to 28-14 early in the third quarter.  Butte scored the next three touchdowns.

It was the league opener for each team as SRJC drops to 4-2.  SRJC will be at Foothill, the only team in the league under .500, next Saturday.

The rest of the league teams play today.