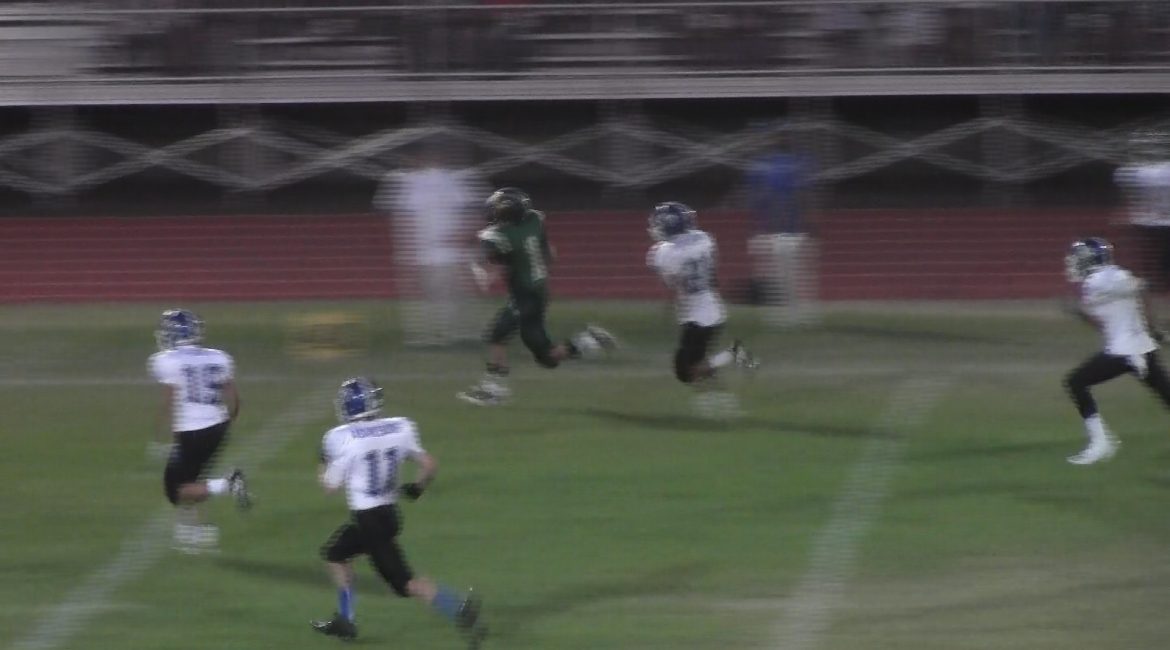 It was running clock night in the area as there were many one sided games and most of them weren’t good news for the local teams.

Maria Carrillo gets the win of the night and its first win of the season.

Alex Netherda scored from four yards out to give Maria Carrillo the lead for good with three minutes left in the second quarter.

Alhambra led 15-7 in the first quarter.  Maria Carrillo then scored 28 straight points to take control.  Quarterback Clayton Pool threw two first half touchdowns and ran in two more in the second half.

The last score of the run was a 32 yard interception return by Evan Bluestone with two and half minutes left in the third quarter.

Maria Carrillo makes a nice rebound of a 42-7 loss to Benicia and is 1-2 on the season.  They open up NBL play next Friday Night at Santa Rosa.

Speaking of Santa Rosa, they were one of several one sided games that dominated the evening.   The Panther’s first home game was delayed an hour because of the Deer Valley bus broke down.

Once they got to the game they proved the football team wasn’t close to broke down.  Santa Rosa scored late in the second quarter.  By then they were behind 36-0.

Nsimba Webster did it all for Deer Valley, throwing two touchdown passes and rushing for three more.  He had over 300 yards in total offense.  On the season he has over 1,000 yards with a combined 17 touchdowns in a 3-0 start.

It was much the same for Rancho Cotate who didn’t have bus issues but didn’t know what hit them.   The Cougars trailed 35-0 in the first half.

On the second play of the game, Joman Dotson went 82 yards for the game’s first score.  That was the first of five touchdowns for Dotson, who rushed for 187 yards.

After that first score Rancho Cotate responded with a nice drive to the nine.  But the game’s tone was really set when Malik Beachum returned an interception 98 yards for a score.  It was one of six turnovers for the Cougars.  Four of those in a six minutes segment that ended the first quarter, which led to the 35-0 score one minute into the second quarter.

Both Santa Rosa and Rancho Cotate drop to 2-1.

Some local teams did do well in the one sided games that dominated the night.

As expected, Analy had no problem with Stellar Prep.  Alishua Johnson scored the first two touchdowns of the game and rushed for 112 yards as the Tigers had a 42-0 halftime lead.

It was just as easy for Petaluma.  Gabe Medina returned the opening kickoff 85 yards for a score and then scored the next three touchdowns on runs as the Trojans took a 33-0 lead at the half.  Medina ended up with 200 yards rushing on only eight carries to even its record at 2-2.

After finding out 24 hours earlier that they had to forfeit its 2-0 start, Middletown took out the frustration on El Molino jumping out to a 34-0 halftime lead.  Austin Benson rushed for 153 yards on only eight carries and scored three touchdowns.

That could change as Middletown is appealing the forfeits next week.

Healdsburg benefited from one of Middletown’s forfeits and then went out and hammered Piedmont.   Tanner Caristando had runs of 56 and 80 for touchdowns as they ran out to a 21-3 lead after one quarter.   It was Healdsburg’s first real win of the season.

Elsie Allen was on the wrong end of a one sided score.  That was more of a slow loss compared to the other being over early.  Emery had a safe 14-0 lead in the third quarter when in punt formation the ball was over the head of the Elsie Allen punter and Emily recovered for a gift touchdown.

Piner for the second week in a row had a pattern they’d like to lose quickly.  For the second straight week they fell behind 21-0 before having a rally that fell short.

The Prospectors scored two fourth quarter touchdowns that also had a recurring theme with last week’s loss to Tamalpais with missed extra points.  A missed kick and a missed two point conversion kept it a two score game.

Last week a missed extra point was the difference in a 21-20 loss.

In the NCL II/Bay Football opener Calistoga goes to 4-0 as they defeated defending co-champions CSD of Fremont.

Dylan Alvarado rushed for 265 yards and two second half touchdowns. Orion Harrell threw two first half touchdowns and ran another one as the Wildcats took a 20-0 halftime lead.

Calistoga continues its turnaround after going 0-10 two years ago which was rock bottom of a streak of four straight under .500 finishes.

It was reported yesterday that the JC game was today.   It was Friday and this morning SRJC is 3-0 after a win over Sacramento.

For the second week in a row the Bear Cubs scored three second half touchdowns to rally for the win while holding the opponent scoreless.

More details of this game coming.