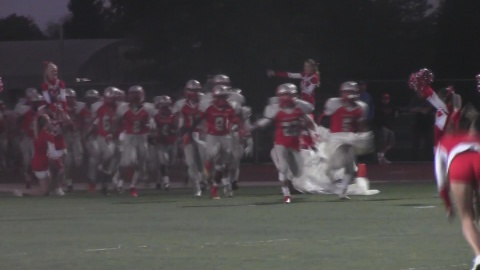 So now we can focus on the league stuff.
The state playoffs are not going to happen for any local teams this season.
The best chance was Analy, who for the first time met a team from outside the area and met a good team that was from out of the area.  The results were the same as what usually happens when a team from this area meets a good team from outside the area, which means it didn’t go well for the local team.
So we move onto league play.
NON LEAGUE
McClymonds 55 No. 1 Analy 14
Now Analy knows how some SCL teams have felt as they have been dominating the league the last two years.  They also know how the teams they met in the first three games of the season feel.
Kevin Davidson was over the 400 yard mark in the third quarter and threw six touchdown passes to lead McClymonds to a 55-14 win.  McClymonds led at the half 34-0 and added three third quarter touchdowns.
Analy falls to 3-1 and will be more than happy to get back to meeting local teams.    Next week they open league play with a home game against Sonoma Valley.
NORTH BAY LEAGUE


In a game with five lead changes and a dramatic finish, Montgomery defeated Maria Carrillo 30-23.
Cedric Louis returned a kickoff 65 yards for the game winner.  That was moments after Conner Eastwick kicked a 36 yard field goal with 1:01 left to tie the game.
The fact that the game ended up with such a high score didn’t seem likely going into the final quarter.  Maria Carrillo had a 12-10 lead going into the fourth, scoring one touchdown on a 54 yard run by Alex Netherda in the second quarter and another on an interception return by Jordan Rosado in the third.
Montgomery’s only touchdown came on the first play of the third quarter on a 41 yard run by Ke’Shawn Walker.   It was part of a 164 yard night for Walker and one of his two touchdowns.   The run gave Montgomery a 10-6 lead and was lead change number two.   Lead change number three came moments later on the interception return by Rosado.
Walker’s second touchdown gave Montgomery a 23-12 lead in the fourth quarter before Maria Carrillo rallied to apparently get the game in overtime.
Both teams are now 2-2 on the season.
The rest of the NBL had one sided games.
Windsor scored a defensive touchdown in the first minute of the game and defeated Ukiah 49-7.
Windsor led 35-0 at the half and go to 4-0.
Carlos Franco rushed for two scores and caught another as Rancho Cotate defeated Casa Grande 45-10.  Franco started the scoring with a 68 yard run.
Rancho Cotate led 28-0 at the half, 45-7 after three and is 2-2 on the season.
Kasey Mansen scored three touchdowns as Cardinal Newman defeated Santa Rosa 48-19.
Manson returned two kickoffs and also returned a fumble 55 yards for his three touchdowns.
Cardinal Newman led 42-12 at halftime and is 2-2 on the season.

Sonoma Valley 13, No. 9 Petaluma 5
El Molino 27, Healdsburg 24
SATURDAY
Elsie Allen (0-4) at Piner (2-2)
The Sonoma County League had the close games.
Tristen Mertens rushed for 187 yards and two touchdowns as Sonoma Valley defeated Petaluma 13-5.
Mertens first touchdown came on a 57 yard run with 9:40 left in the third quarter that gave Sonoma Valley a 7-2 lead.
Sonoma Valley had given up 100 points in a 0-3 start and kept Petaluma out of the end zone.
Petaluma drops to 2-2.
Eddie Taylor score three touchdowns as El Molino led all the way and held off Healdsburg 27-24.
El Molino  had a 20-6 lead at the half.  Tanner Cristano returned the second half kickoff 94 yards and then Healdsburg blocked a punt for another score to cut the lead to 20-18.
Healdsburg had the ball at the El Molino 7 with six minutes left and couldn’t score.   El Molino kept the ball the rest of the way.
El Molino is 3-2 on the season.
Healdsburg dropped to 0-4.

NCL I
No. 7 St. Helena 44 Kelseyville 7
No. 8 Fort Bragg 29 Lower Lake 28
No. 10 Middletown 50 Willits 6
Cloverdale 26 Clear Lake 0
The NCL I look like the NBL as far as being a wide open race.
Another thing they had in common with the NBL, was it was hard to find a close game to open league play.
The one close game didn’t start out that way.   Interception returns by James Clark and Isazah King propelled Lower Lake to a 28-7 halftime lead over Fort Bragg.
The interception return, which was a 98 yard return, wasn’t all King did in that first half.   He also scored on 61 and 33 yard runs.  That was part of a 247 yard rushing game.
The second half was all Fort Bragg as they rallied for a 29-28 win.  Kaylor Sullivan passed for 317 yards and a touchdown and rushed for one more to lead the comeback.
Fort Bragg is now 3-1 on the season.
The rest of the games one sided.
St. Helena pulled away in the second half and defeated Kelseyville 44-7 in a game between 3-0 teams.
Jahavier Otero scored on an 18 yard run midway through the third quarter to give St. Helena a 16-7 lead.
After that it was all St. Helena.
Wyatt Hall set the tone with a 70 yard touchdown run on the first play of the game as Middletown defeated Willits 50-6.   It was one of three touchdowns for Hall who rushed for 243 yards.
Cloverdale is 3-1 after a 26-0 win over Clear Lake.    It is Clear Lake’s first loss of the season.
Cloverdale was helped by seven Clear Lake turnovers as they scored two touchdowns in each the second and third quarters.
Cloverdale has given up seven points combined in its three wins.
SATURDAY JC FOOTBALL
Laney (1-2) at No. 4 SRJC (3-0)…5 pm
KSRO 1350 AM and 103.5 FM
My email address is jacpasquini@comcast.net
Share