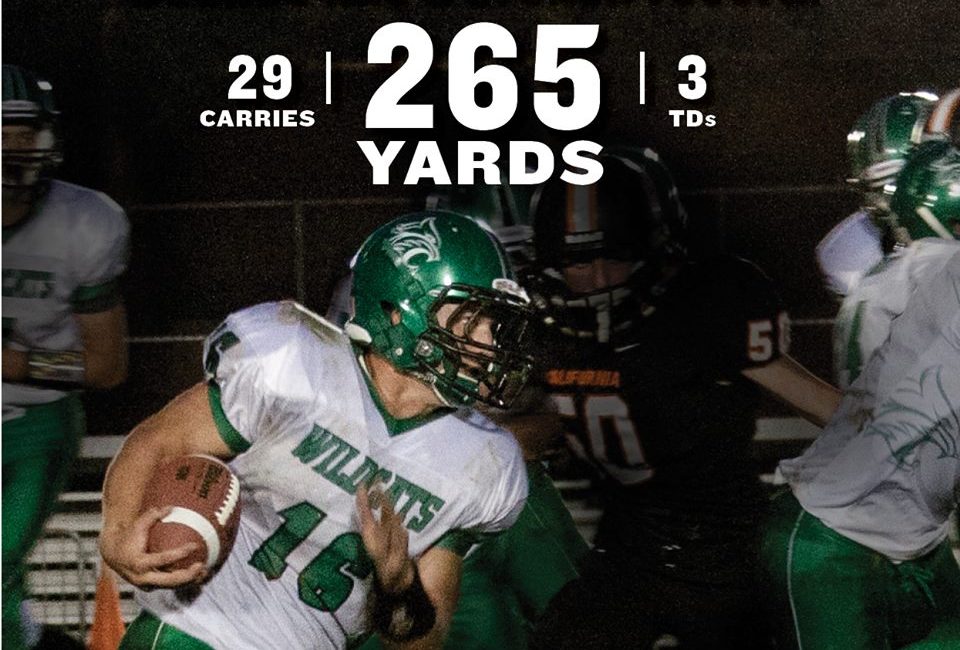 The thank you is to Calistoga Running Back Dylan Alverado.

If it wasn’t for him, for the second week in a row the headline of the night would have been the use of the running clock.   The games were more one sided than the games that made that the headline last week.

Instead the headline of the week is Calistoga Running Back Dylan Alvardo who surely will be the YSN365.com player of the week for the second straight week.

Alvarado earned that last week by setting a school record by rushing for 270 yards and two touchdowns.  The ink wasn’t dry on the record before he broke it again.

Actually he shattered it.

Alvarado rushed for 407 yards and seven touchdowns, which is another school record.   The thing about it, Calistoga needed those monster numbers to keep control of a 55-28 win over Emery, in a game that was closer than the score indicates.

It didn’t take long for the senior running back to put his stamp on the game.   After Emery took a 6-0 lead, Alvarado went 61 yards for the score that gave Calistoga the lead for good.

By the time he scored on a 60 yard run with four and half left in the second quarter, he had a choke hold on the story of the game.  The run was his fourth touchdown and gave Calistoga a 28-6 lead.

Emery kept coming and cut the lead to 28-20 at the half.  That is when Alvarado scored touchdown number five.  Orian Harrell then scored the first non-Alvarado touchdown on a five yard run to make it 41-20 in the third quarter.

Emery cut it to 41-28 before Alvarado finished off his fabulous night with two fourth quarter touchdowns.

Alvarado was already having a season to remember, this game up the stakes.  Going into the game he had rushed for at least 180 yards in three of four games.

NCL II/Bay League play started last week and he has upped the ante.  He is one average run away from going over the 1,100 yard mark on the season and has scored 14 touchdowns.

Alvarado is about 220 yards and two touchdowns from his numbers of last season.

For the senior running back, that’s an average game.

Now, if we must, onto Blowout Friday.

Two of the four results had closer finals than the above mention Calistoga-Emery game, but really weren’t, especially one of them.

No. 1 Casa Grande started out like they were going to run Montgomery off the field.  That was thanks mostly to quarterback JaJuan Lawson, rushed for a game high 188 yards, 176 of them in the first half.

Casey Longaker intercepted a pass on the Montgomery’s first possession to give them the ball at the Viking 28.  Four plays later Lawson hit Miles Gardea on a 14 yard touchdown pass, which turned out to be his only one of the night.

That doesn’t mean he wasn’t heard from again.   After another three and out, Casa Grande was forced on the next possession to start on its own 13 yard line after a 58 yard punt.

Lawson then electrified the big crowd with an 87 yard touchdown run to make it 14-0.  He would make it 21-0 midway through the second on a 29 yard run.

To Montgomery’s credit, despite losing starting quarterback Elijah Higgs to a separated shoulder in the second quarter, they hung in there and held Casa Grande to three field goals the rest of the way.

Backup quarterback RJ Flores came in to go 7-13 for 99 yards, most of it on a 59 yard pass to Etienne Ezeff, which set up one of two tough touchdown runs by Logan Francavilla.

Montgomery gave the appearance that they are back and will be a force in the NBL race despite its first loss in four games.

They just ran into a Casa Grande team who appears to be the best team in the area.

The other final that ended closer than that Calistoga game wasn’t that close.

That was the Maria Carrillo-Santa Rosa game.  Maria Carrillo with help of five first half Santa Rosa turnovers, three of them in a four minute span inside their own 20, raced out to a 35-7 lead.

Cardinal Newman led Ukiah 28-0 at the half and moves to 3-1.  Keaton Dunsford threw for 309 yards and four touchdowns.

Meanwhile Rancho Cotate recovered nicely from last week’s disaster in its win over Windsor.  Malik Newton rushed for 111 yards and a touchdown as the Cougars took a 29-7 halftime lead.

So even after just one week of league play, the standings have a familiar look to them.

If the only two teams that were rated from the SCL in the YSN365.com top ten deserved it, there is a big difference between Analy and the rest of the league.

Ja’Narrick James went 55 yards in the first minute of the game, the first of four first half touchdowns as Analy raced to a 30-0 lead.  It was 37-0 early in the third quarter after Kerr Johnson returned a punt 70 yards for another score.

Analy is 3-1 on the season while Sonoma Valley has lost two straight to drop to 2-2.

Trystan Cleaver rushed for 153 yards and three touchdowns as Healdsburg led Elsie Allen 45-0 at the half.

Middletown is 2-2 with the forfeits, 4-0 without them.   They are still being appealed.

That wasn’t the biggest rushing night in the league.  Zach Smith rushed for 258 yards and four touchdowns as Fort Bragg defeated Lower Lake.  The first time Smith touched the ball he went 92 yards to start his big evening and even both teams record at 2-2.

Finally there is a close game to talk about.

Clear Lake rallied and then held off Cloverdale.

Cloverdale just missed its first win of the season after leading most of the way.  Cole Brodnansky caught a 35 yard touchdown pass to give Clear Lake the lead with 3:59 left.  Cloverdale then drove to the 10 yard line and Brodnansky intercepted the pass in the end zone to end the game.

It was a reality check for SRJC.  After taking a 7-0 lead they gave up 48 straight points for its first loss in four games.

Jake Bist threw five touchdown passes, three of them to Tyler Trosin to raise its record to 4-0.