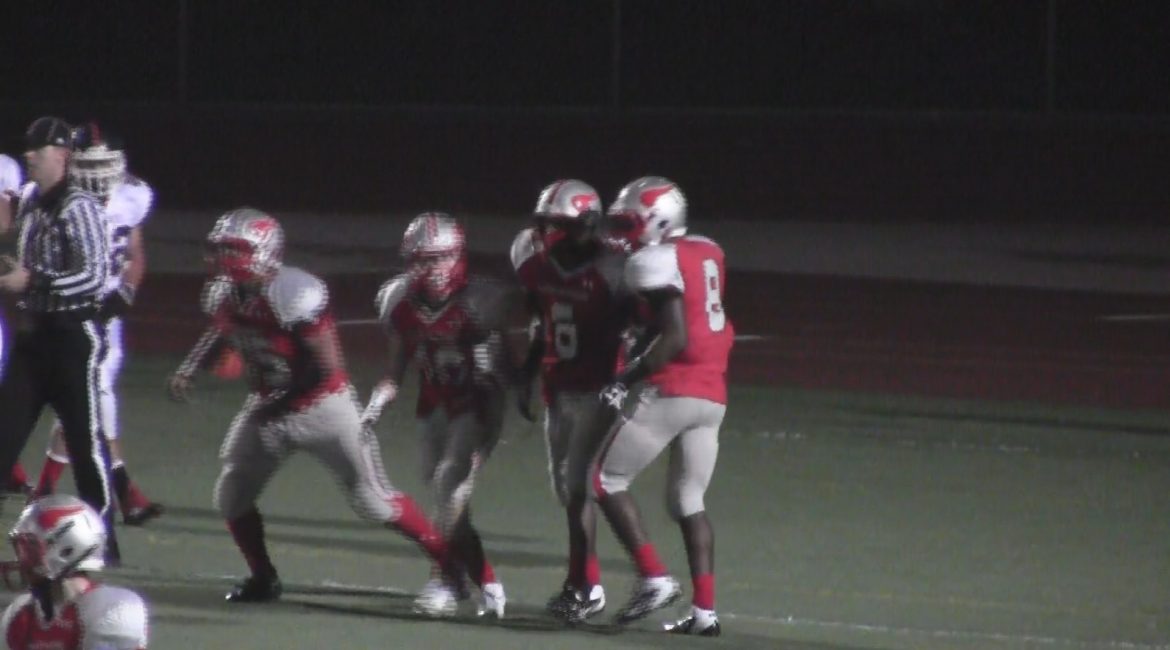 It was a showdown Friday Night of sorts in high school football with three leagues having a game for the top of the league race.

The results went pretty much as expected and it was hard to find a suspenseful game.

The two top ranked teams in the area had the closest games, and they weren’t very close.

It was generally considered that for Maria Carrillo to pull off an upset against Casa Grande they would have to play pretty much error free ball.

Not close and it was the main theme in Casa Grande’s win.

Maria Carrillo turned the ball over five times with the biggest in the first quarter when Miles Gardea caught a fumble in midair and went 45 yards to give Casa Grande a 14-6 lead with 2:19 left.

That was the first of three Maria Carrillo first half fumbles.  Each fumble gave Casa Grande the ball in good field position and the Gauchos took full advantage of the position with touchdowns to give them a 27-6 second quarter lead.

Things started off promising for Maria Carrillo who changed personalities and passed more than they ran in the first quarter.  The strategy worked early when they hit a 50 yard pass from Clayton Pool to Jordan Rosado that set up a 12 yard run by Joe Pinney which gave Maria Carrillo an early 6-0 lead.

The score came after both teams had the ball once and were forced to punt without getting a first down.

The score also seemed to wake up Casa Grande.  They responded with a 63 yard drive which consisted of a 30 yard run by John Porcivina and a 33 yard run by JuJuan Lawson which gave Casa Grande a 7-6 lead.

It turned out to give them the lead for good.

That was followed by the fumble fest.  Maria Carrillo lost the ball on its next three possessions and just like that Casa Grande had a 27-6.  The first fumble was returned for the touchdown by Gardea, two other fumbles gave Casa Grande the ball in Maria Carrillo territory which was converted into touchdowns.

Maria Carrillo quarterback Clayton Pool was four of fourteen passing, but when he did hit it was usually big, especially to Rosado who had three catches for 113.

But the game was never in doubt from the second quarter on.  The win gives Casa Grande a 6-0 record and because they got help from Montgomery they are in sole possession of first place in the North Bay League race.

Montgomery, who used the running game in its OT win over Cardinal Newman last week, showed they could pass in its win over Rancho Cotate.

Starting his second game, RJ Flores completed 12 of 19 for 208 yards.   His main target was Justin Eatmon, who caught seven passes for 172 yards and two touchdowns.  Both touchdowns came in the second quarter and were the Vikings first two scores that wiped out a 3-0 Rancho Cotate halftime lead.

The night was homecoming for Montgomery and it doesn’t get any easier for Rancho Cotate.  Next week they go to Casa Grande, which is the Gauchos homecoming.

Both Montgomery and Rancho Cotate, along with Maria Carrillo and Cardinal Newman are now 2-1 in league play one game behind Casa Grande.

Cardinal Newman joined the other three with a big win over Santa Rosa.  Keaton Dunsford threw for two scores and ran another one in as the Cardinals took a 31-0 halftime lead.

Santa Rosa, who was playing without injured quarterback Vince Jones and receiver Alfredo Carretero, was held to under 100 yards in total offense.

After falling behind 7-0, Windsor got everything going to get its first league win in Ukiah.  Colin McAlvain threw three touchdown passes and Christian Roberge rushed for 195.

Windsor raises its overall record to 3-3.

It is getting ridiculous what Analy is doing.

For the third straight week they played one of the top teams in the SCL.

For the third straight week they steam rolled.

This week they did their best of spoiling Healdsburg’s homecoming  by taking a 57-7 by the halftime festivities.

Healdsburg’s only score was a 90 yard kickoff return which made it 7-7 in the first quarter.

To open league play Analy has met Sonoma Valley, Piner and Healdsburg and outscored them 154-27.  134-14 of that margin is in the first half.

Analy talks over sole possession of first place because El Molino also lost its first league game to Petaluma.   Yusef Kawasami rushed for three touchdowns as Petaluma led 37-0 after one.

We have a decent shot at one close game for during the weekend.  That is today when Sonoma Valley travels to Piner.  Kickoff is at 2 pm.

Of the three games on the night between 2-0 league teams the Middletown win over St. Helena was the closest.  It barely registered on the suspense needle.

St. Helena did get an 88 yard kickoff return from Gatlin Blakeley which was the first score that Middletown has allowed since the opening game of the season.   That came in the fourth quarter with Middletown leading 21-0.

St. Helena did make Middletown work.  Austin Benson rushed for 122 yards and a touchdown which made it 14-0.

The biggest problem for the Saints was moving the ball.  They gained more yards on a drive in the third quarter than they did in the entire first half.  That drive didn’t end well.  Starting at its own 20 they took the ball to the Middletown 2.  That was followed by a penalty and a fumble and St. Helena’s best chance to make it a game was foiled.

Middletown is now 5-1 on the season.  The loss is the opening game forfeit to Salesian, which an appeal hearing is still pending.

Unlike the other two leagues, Middletown still is sharing first place in the NCL I race.  Clear Lake is also 3-0 after its win over Lower Lake.

Marty Sugimoto rushed for three scores as Clear Lake jumped out to a 28-0 lead at the half.   The Cardinals defense intercepted three pass in the half, two of them by Gabe Oilar-Strong who returned the second one five yards for a score to make it 14-0.

Clear Lake is 5-1 overall and travel to St. Helena next week.     They have two games before a potential showdown for the league championship at Middletown at November 1st.

There was one thriller on Friday Night.   Fort Bragg edged Kelseyville in a game that the two teams combined for five fourth quarter touchdowns and over 600 rushing yards.

Kelseyville led 16-7 in the first quarter before Smith got going.  His 45 yard run in the third gave Fort Bragg the lead for good 29-22.

Cloverdale has more wins than they did in any of the last three seasons.  Josh Holden threw one touchdown pass and rushed for two more in its win over Willits.

Cloverdale has a two game winning streak which is the first time they can say that since 2009.

The week off had an effect on Calistoga running back Dylan Alverado.  He only rushed for 212 yards and three touchdowns in its win over Stellar Prep.

Two games before, Alvarado broke the Calistoga rushing record with a 270 yard game.  A week later he broke that record when he went for 407.

In the last three games he has rushed for nearly 900 yards and 13 touchdowns.  For the season he is over 1,300 yards.

Calistoga is 6-0 on the season and in sole possession of first place in the NCL II/Bay Football League race.  They are in good company with Casa Grande as the only undefeated teams in the area.

Tomales is one of three teams that are sitting behind Calistoga with one league loss.

Emery is one of the other teams going into today’s game with Upper Lake.

The other is St. Vincent who has a bye.