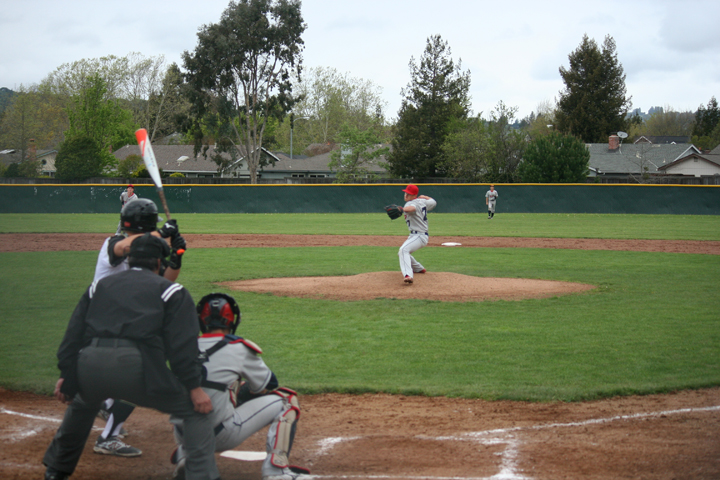 They are called stoppers.  When it comes to baseball it is defined as a pitcher taking the world on his shoulders when things aren’t going well and gets his team back on the right track by going out and throwing a game that is almost impossible, if not impossible to beat.

After winning its first eight games of the season, No. 3 Casa Grande had dropped three straight.

They needed a stopper.

Dominic Garihan played the role to near perfection by pitching his first no-hitter, leading Casa Grande to a 8-1 win over Windsor to not only snap the three game slide, but get the defending NBL champion its first league win in its second attempt.

By looking at the score you would think that the no-hitter was all Garihan had to think about most of the game.  That would be false.   Casa Grande needed him to be good as this was far from a blowout until late.   Casa Grande broke the game open by scoring six in the sixth to give Garihan some breathing room.

The senior threw his first varsity complete game and also had a career high nine strike outs in the 80 pitch performance.   He started a team high eight games for last year’s 27-3 team, going 5-0 with a sparkling ERA of 0.92.  The longest he pitched was 6 1/3, which he did twice.  Once was in relief, getting the win in the epic 13 inning 12-11 win over College Park in the NCS Semi-Final.  As a JV in 2012, he went 5-0 for a team that went 21-3 and threw two complete games and striking out 12 twice.

Windsor scored its run in the fourth when Garihan issued his only walk.   The runner went to second on a fielder’s choice, moved to third on a wild pitch and scored on a ground out.

The run tied the game and it stayed that way until the sixth, when five different players drove in runs and when the inning ended Casa Grande had a 7-1 lead and control of the game.  Spencer Torkelson drove in two with a single.   The six run inning was the biggest of the season and it is more runs than they scored in any game since the first two when they defeated Heritage 10-1 and Marin Catholic 6-3.   They had five run seventh in the Heritage game which was its biggest inning until Friday.

The win was twenty four hours after that Casa Grande dropped its league opener to Maria Carrillo 2-1.

NOT THE ONLY GEM…OR BIG INNING

There weren’t any other no-hitters, but the theme of the Casa Grande played itself out in other games on Friday.   That is a good pitching performance, backed up by the big inning.

No.2 Maria Carrillo scored six in the fourth, which back up the pitching Peter Hoge in a 8-0 win over Rancho Cotate.  Hoge went six innings giving up two hits.   One of two doubles by Andrew Vaughn drove in two runs in the big inning.  Austin Martinez also had a two run single.


Maria Carrillo is now 8-2 on the season and has won its first two league games.

Jared Noonan pitched a three hitter as No. 9 Montgomery took a 10-1 win over Santa Rosa.  It was Noonan’s second win of the season and his first complete game.   As was the case in the Casa Grande win, this game was close most of the way. Montgomery scored eight runs in the sixth to blow things open.   Junior, Zac Merriken came in the game as a pinch runner and scored the first run of the inning.   About fifteen minutes later hit a bases loaded triple and scored his second and Montgomery’s last run of the inning.  The stats were Merriken’s first offensive numbers of the season.

The win snapped a three game losing streak for Montgomery and evens its league record at 1-1, which is the same as Santa Rosa.

That kind of game wasn’t only in the NBL. Piner scored five in the first and defeated Elsie Allen 10-0 in its first SCL game.  Jake Wiggins went the distance pitching a one hitter.

Piner snapped a three game losing streak and is 5-4 on the season.

Three days after playing the 11 inning suspended game, No. 1 Petaluma and No. 4 Analy both got league win number one.   Both teams combined for the kind of games the day had.

For Petaluma it was the big inning.  Carrying a 3-2 lead over Healdsburg into the bottom of the sixth, they scored five times in an 8-4 win.   Austin Gabbert had the big hit of the inning with a three run double.   That gives him 16 RBI on the season, which is the only player in double figures for Petaluma.  Dante Del Prete started his second game and got his second win.   His first start was in his last appearance on March 19th which was a complete game 8-1 win over Montgomery.

For Analy it was the pitching gem part of the equation. Evan Hill pitched a two hitter in a 5-0 win over Sonoma Valley.  Analy scored two runs in each of the first and second innings which was plenty of offense.

So after the first week of league play Petaluma, Analy and Piner are all 1-0.   Piner had the BYE in Game One.   Of course Petaluma and Analy had the suspended game.

Considering the weather this week’s schedule made it through pretty clean.   The team that got affected most by it was the Ukiah Baseball team.   They had its game at Rancho Cotate pushed back a day earlier in the week and its Friday home game with Cardinal Newman was postponed.    That might have something to do all that traveling to play a game that might not be played which makes sense.

The Cardinal Newman-Ukiah game has been rescheduled for next Thursday, which means both teams will have three games in three days.

No. 1 Petaluma and No. 6 Rancho Cotate each had non-league action on Friday.

Rancho Cotate is in the HASA Tournament in Antioch and had two games and two wins defeating Concord 1-0 and Antioch 4-2.   Freshman, Britney Scardina pitched 13 straight scoreless innings before allowing two runs, one of them earned, in the seventh inning of the Antioch game.  She is six for six in complete games and has an ERA of 0.83.

On the offense side of things Carolino Camacho had two of the three hits and drove in the only run.  In the second game Brittney Scardina had two hits and 2 RBI.

Rancho Cotate, who is 5-0-1 on the season, is scheduled to meet Pittsburg today.  After that the teams will be seeded and a tournament champion will be decided.

Next up on Tuesday they are at No. 2 Maria Carrillo.

Petaluma defeated Pinole Valley 6-2 and is 6-1 on the season.   Emily O’ Keefe got the win and is 4-1 on the season.  Joelle Krist started the scoring with a three run homer in the second.  That is her sixth of the season, which is an average of a homer every four at bats.

If you think that is amazing how about the season Brie Gerheardt is off to? She had a four hit game and is now 21 of 29 on the season, which is a .724 average.   She has had at least two hits in five of the six games.