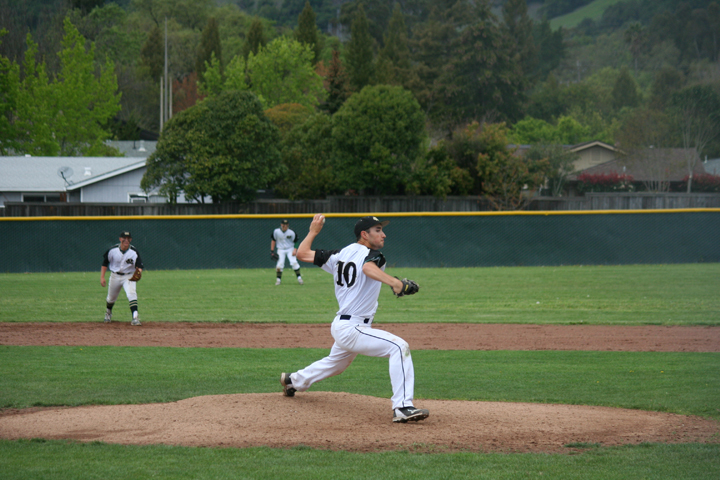 They were two different kinds of wins, but they equaled the same thing.

No. 1 Maria Carrillo and No. 2 Analy both won on Friday and sewed up at least a tie for their league championships.

Maria Carrillo gets it first NBL pennant since 2001.   They also have a seventeen game winning streak and are 20-3 on the season.    They still don’t have the NBL Championship outright.   They have a two game lead over Montgomery with two games to go.   Montgomery kept alive with an 11-0 win over Ukiah.

Maria Carrillo is at Montgomery on Wednesday.

While Maria Carrillo pretty much had its game put away early, Analy’s game was dripping with suspense.    The Tigers were two outs away from dropping a 1-0 game to Piner.    The Tigers scored unearned runs in the seventh and eighth to take a 2-1 win.

As you might think, by looking at the score, it was a heck of a pitching duel.   Analy’s Evan Hill took a no-hitter into the sixth inning, while Piner’s Tony Martignoli went all eight innings and didn’t allow an earned run.

Analy did have its chances.   They had two runners on in three of the first six innings, but couldn’t break through.  The best chance was in the second when Joaquin Meckler hit a one out double and went to third on a single by Johnny Gomes.   Martignoli got out of the inning with a strike out and ground out.

Meanwhile Hill was dominating Piner.  The closest thing to a rally for them was two line drive outs in the first inning.   In the first three innings Piner had one ball out of the infield and one base runner that was picked off after one pitch.

Hill started the fourth with a strikeout and then issued back to back walks.   He got out of that inning by striking out the next two.  That was three of his nine strikeouts on the game.

With one out in the sixth, Martignoli beat out a ground ball to shortstop for Piner’s first hit of the game and was bunted to second by Ben Stole.   After Niko Formosa was walked intentionally, Dylan Curran smacked a base hit to right field, which scored Martignoli for the game’s first run.

Analy tied things up in the seventh without a hit.  Pinch hitter Henry Campbell walked on four pitches.   Pinch runner Ryan Calderson was bunted to second and scored on an error.

Hill’s final inning was the bottom of the seventh.   One base runner reached on a dropped third strike, which was one of his two strikeouts in the inning.   Only three outs went to the outfield.

So the game went extra innings, something that Analy is quite comfortable doing.  Analy would raise its extra-inning record to 6-1 by scoring the game winner in the eighth.  Meckler scored it on a two out error and Jae Wagner came on in relief of Hill and retired the side in order in the bottom of the eighth and pick up his second save.

The winning streak for Analy is now 11 and overall they are 17-4 on the season.    They are two wins away from going through SCL play undefeated for the second year in a row.

Analy’s two game lead with two to go is a little more stable than Maria Carrillo’s.    Analy has its two games lead over Petaluma, who they have two of the extra inning wins over and would win the tie-breaker.   Analy will be the SCL league champion designate in the North Coast Section playoffs no matter how the last two games play out.    Analy is No. 3 in the Division 3 power rankings.   One of the teams they are behind is Drake who handed the Tigers one of its three losses on February 27th by a 3-0 score.

Analy finishes the regular season with three games in four days. Two are league games with Elsie Allen and Healdsburg, which are wrapped around a non-league game at San Marin, who is a team they could see in the NCS playoffs.

Petaluma could still finish tied for the SCL crown by winning two and Analy losing two.  That combination would get them a pennant.   The Trojans stayed alive with a 7-1 win over El Molino.   They put the game away with a five run fifth.   Will Nevin pitched a complete game three hitter to raise his record to 3-1.  Since a 3-3 start they have won 14 of 17.   Two losses were those extra-inning games to Analy.

Despite the loss Piner, clinched a spot in the SCL post season tournament and will travel to Analy in the first round.   The other first round game will be Sonoma Valley at Petaluma.

Maria Carrillo needs one win to get not only the outright NBL championship, but to be declared the league champion for NCS league purposes.    Montgomery would win the tie-breaker if they ended a tie with Maria Carrillo for first.    Besides the Wednesday game between the two at Montgomery, Maria Carrillo hosts Cardinal Newman on Friday while Montgomery goes to Casa Grande.

The four teams for the North Bay League tournament are set.  The matchups will be decided this week.

It wasn’t a good start for the SRJC Baseball team in the State Playoffs.    The Bear Cubs fell to San Mateo 4-0 to fall behind the Best of Three series 1-0.   Game 2 is at 11 am at SRJC and if necessary Game 3 will be played a half an hour after Game 2.

The same thing happened to SRJC last year.   They lost the first game of a best of three series to Los Medanos.   They won both games on Saturday to win the series.

The SRJC softball team starts its state playoffs today with Game 1 of a best of three series against San Jose City College.   Game time is 2 pm.   Game two is Sunday at noon with Game 3 (if necessary) at 2 pm.

FINISHING OFF A HECK OF A WEEK

The Cloverdale Softball team should have a restful weekend.  After a three game week full of tension they deserve one.

The Eagles wrapped up the week rallying from a 3-0 deficit to defeat Middletown 4-3.    Jazmin Orosco hit a two out two run single for the game winner in the sixth.    Teanne Edens struck out eleven in another complete game win.

Cloverdale started out the week with a Tuesday one run loss to Lower Lake.   Then on Wednesday, they went on the road to defeat Clear Lake and wrapped it up with the Middletown win.