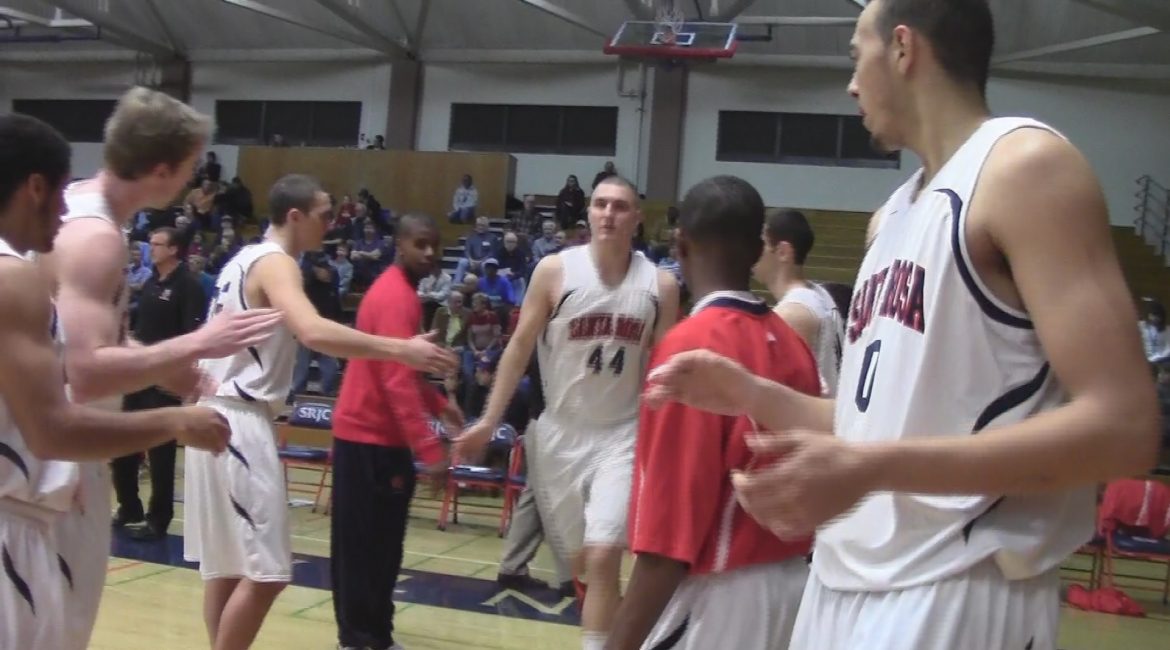 Casa Grande guard Cetric Yeaney hit a milestone Friday night scoring his 1,000 point of his varsity career.  He is at least the fourth player in Casa Grande history to hit that figure.  Yeaney hit a three pointer on the first possession of the fourth quarter to give him exactly 1,000 points.   The fans from both teams gave him a nice hand and game was stopped briefly as he threw the game ball to his dad, who was sitting in the stands.  Yeaney ended with a team high 12.

The Casa Grande faithful hoped the milestone point would have happened a little differently.  Yeaney went into the game needing six points to reach the mark.     The fact that he reached it that late in the game might tell you what type of job the Cardinal Newman defense did on him and the tone of the game.  When the shot went down No. 7 Cardinal Newman was well on its way to a 58-47 win.

Yeaney didn’t score his first points until he hit a three with two minutes to go in the third quarter.   That cut Cardinal Newman’s lead to 40-30, which was as close as Casa Grande got after falling behind 24-12 midway through the second quarter.   Connor Head helped make sure that it wouldn’t get closer by scoring the last 17 Cardinal Newman points, part of a game high 26.

Cardinal Newman took control of the game thanks in part to the hot shooting of Sophomore Connor Rubattino, who hit a season high five three point shots in six attempts.   His last one gave Cardinal Newman the 24-12 lead as he ended the game with 16 points and a team high eight rebounds.

Cardinal Newman is 12-8 on the season and stays one game behind Montgomery in the NBL race.

No. 1 Montgomery made it two straight since the loss to Casa Grande with a 76-40 win over Rancho Cotate.  Alec Raven was one of three Vikings in double figures with 19 points as they go to 16-5 on the season.

The biggest game of the night was up north where No. 5 Maria Carrillo went on the road to defeat No. 4 Ukiah 61-43.  Both teams went into the game one game behind Montgomery in the NBL race.

Connor Wright scored 18 to lead the Pumas who took control of the game by outscoring Ukiah 20-3 in the second quarter.

Despite the loss, Ukiah is looking good for the final spot in the NBL post season tournament.  They are still two games ahead of Windsor for that last spot as the Jaguars were defeated by Santa Rosa 55-46.  Santa Rosa jumped out to an 11 point first quarter lead and held on after Windsor had cut the lead to four in the fourth quarter.  Daniel Cresta scored 15 for the Panthers.  Dustin Rome scored 12 points and had ten rebounds and five blocks.

Santa Rosa played the game without starting guard Vince Jones, who was out with a severe ankle injury.   Jones was at the game for morale support and the crowd chanted his name to show support.

Montgomery has a home game against Ukiah, before traveling to Windsor.

The first time the Analy Girls met Petaluma they eked out a 54-53 win.  They didn’t cut it that close in the rematch taking a 43-28 victory and at the same time takes control of the SCL Girls race. Jenna Petray scored 17 to lead the way for the Tigers, who jumped out to a 15 point first quarter lead and withstood a Petaluma rally.

No. 7 Analy has a two game lead over Sonoma Valley with four to go.   The Tigers do have a game at Sonoma Valley on February 14th.

No. 9 Petaluma, who defeated Sonoma Valley earlier in the week, falls three games back.

GOOD NIGHT AT FOR THE JC

Both JC teams won and it just missed being a great night for the Men.

It almost turned out to be a perfect night, because first place Cosumnes River was involved in a close game before pulling out a 62-61 win over Diablo Valley, so they keep a one game lead over SRJC in the Big 8 race.

For the Women it was the same results in a different way in a 65-44 win over Modesto.  They won the game despite Gretchan Harrigan scoring 11 points.  It was here second lowest offensive total of the season.

To watch video highlights of the Men’s game click here: