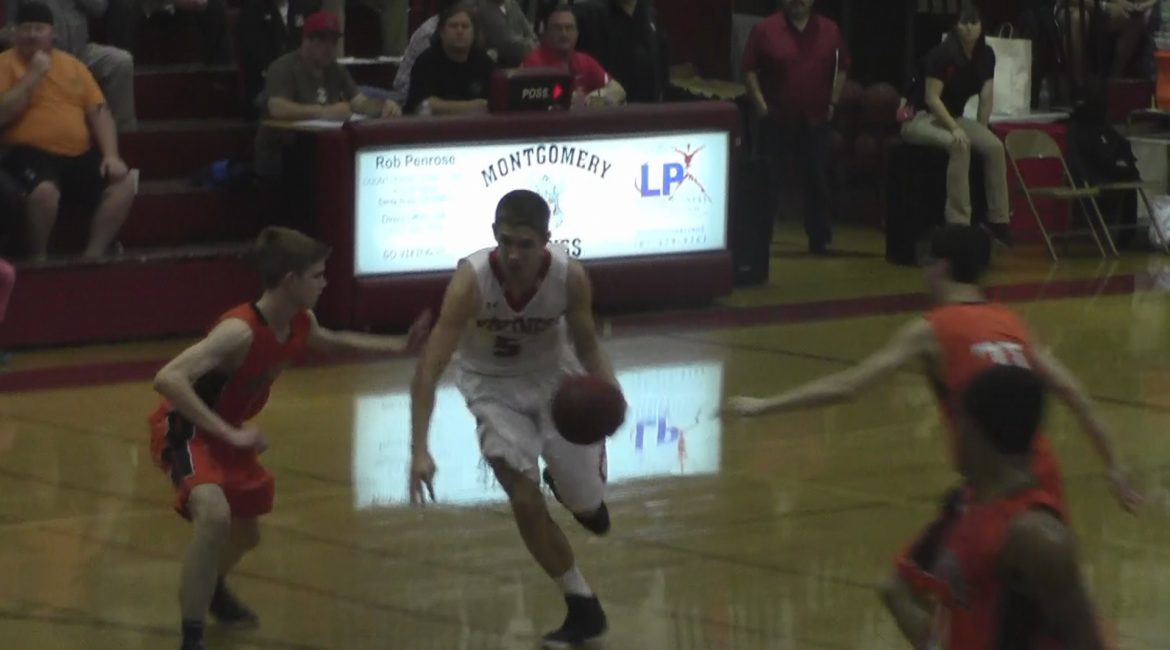 It was a near packed house at the Viking Dome Friday night for the season finale between Santa Rosa and Montgomery. This is one indication of how far the Santa Rosa Boys program has come. They have finished the regular season at .500 and the league season over .500. Those are both first in the Max Preps era.
Here comes the “but”.
The “but” is a two part thing.


Part one is because of a tough forty eight hours they are going to miss the North Bay League post season playoffs.
Part two is- now they have to wait until a week from Sunday to see if they will make the North Coast Section Division 1 playoffs. That doesn’t look promising either.
The forty eight hours started with a tough loss to Cardinal Newman and one bad quarter that was the difference at Montgomery.
In what was the same as a playoff game to advance to the North Bay League Post Season Tournament, Lane Young scored twelve points and Christian Davis added seven of his nine points in the key segment of the third quarter as No. 5 Montgomery defeated No. 6 Santa Rosa 58-45. Montgomery advances to the North Bay League post season tournament, while Santa Rosa waits a week to see if they will get into the North Coast Section playoffs.
The way the first half went it looked like it was going to be a barnburner. Montgomery had a 23-22 lead the half. It was a first half that the biggest spread was five points. Santa Rosa hit a free throw with 6:33 to go in the third to tie it at 23. On the next possession, Hayden Lee pulled down an offensive rebound and put it in to give Montgomery a 25-23 lead. It turned out that that would give Montgomery the lead for good.
On the next Santa Rosa possession, they missed a shot and on the rebound were called for an intentional foul. It was a strange play for that to be called, but call it coincidence that got Montgomery going. Alex Soria hit both free throws which fueled a 14-2 run which gave Montgomery a 37-25 lead with 1:30 left in the quarter. Davis scored seven straight points during the run including a three pointer. Young ended the run with a three pointer. WATCH THE VIDEO HERE
Santa Rosa’s Tommy LaVine scored 11 of his game high 20 points in the fourth quarter. By then it was window dressing. Montgomery had a 46-31 lead with 4:50 left. As close as Santa Rosa got was nine the rest of the way.
Santa Rosa ends the regular season 13-13 and NBL play at 8-6. They can be proud that those records are the best for the school in the Max Preps era. Now they wait for a week and hope they get in the NCS Division 1 playoffs.
Montgomery, who went to 15-10 on the season, has playoff games to play. There is no doubt they will get into the North Coast Section Division 2 playoffs and might even get a home first round game. Next up is the North Bay Post Season Tournament which begins on Wednesday. Montgomery, at 9-5 in league play, ended in a third place tie with Ukiah. They get the tie-breaker because of two wins over Ukiah so they will be the No. 3 seed and travel to No. 2 Cardinal Newman.
The other game will be No. 4 Ukiah at No. 1 Windsor. Both teams ended the league season with wins. Windsor finished off a 14-0 league season with a 63-28 win over Maria Carrillo. Windsor ends the regular season with a fifteen game winning streak and an overall record of 23-3.
Meanwhile, Sammy Mora scored 22 as Ukiah pulled away in the fourth quarter to defeat Rancho Cotate 68-56. The Wildcats ended the regular season with a six game winning streak and are 13-13 on the season.
In the other finale, Cardinal Newman sews up second place with a 58-53 win over Casa Grande. The Cardinals are 18-8 overall and 10-4 in NBL play which is one game ahead of Montgomery and Ukiah.
Casa Grande was the hard luck team of the league. They ended 4-10 in NBL play, with seven of the losses by six points or less.

A PLACE TO PLAY
The routine for the North Bay League Post Season Tournament is to play the championship game at SRJC. That might not happen. According to NBL Commissioner Jan Billing, the SRJC application paperwork, for the event, has been misplaced and the Sonoma County League has reserved the place for next Saturday. The Bear Cubs play at home on Friday night
There is talk that both the NBL and SCL Girls and Boys championship games will be played on Saturday. The NBL would play in the afternoon and the SCL that night. Some NBL coaches do not like that idea. There is talk that the NBL version could be moved to Piner on Friday night.
Stay tuned.

TIED LEAGUE
Jenny Eggers scored 14 points and pulled down 10 rebounds to lead No. 2 Sonoma Valley to a 44-26 win over Piner. With the win Sonoma Valley finishes 18-8 overall and 11-1 in SCL play. They end in a first place tie with Analy.
Analy gets the No. 1 seed in the SCL post season tournament because of the numbers drawn before the beginning of the season. Whoever does the best in the tournament will get the league’s automatic bid in the North Coast Section playoffs.
Petaluma and Healdsburg ended in a tie for third. Petaluma had the best tie-breaker number and is the No. 3 seed at will go to Sonoma Valley. Healdsburg will be at Analy.

GOING TO LAST GAME
Makenzi Smith scored seven of her game high 15 points in the fourth quarter to lead No. 5 Middletown to a 55-45 win over No. 3 Kelseyville. Kelseyville had a one point lead going into the fourth quarter.
The loss snapped a 13 game Kelseyville winning streak and pulled the two teams into a first place tie in the NCL I Girls race with one game to go.
Middletown is now 20-5 on the season, while Kelseyville drops to 21-4. A tie looks likely between the two teams. Middletown ends at Willits, who is 3-10 in NCL I play. Kelseyville hosts St. Helena who is winless.
The NCL I does have a post season tournament next weekend at Mendocino College, so we could be seeing another Kelseyville-Middletown game again.
My email address is jacpasquini@comcast.net
Share