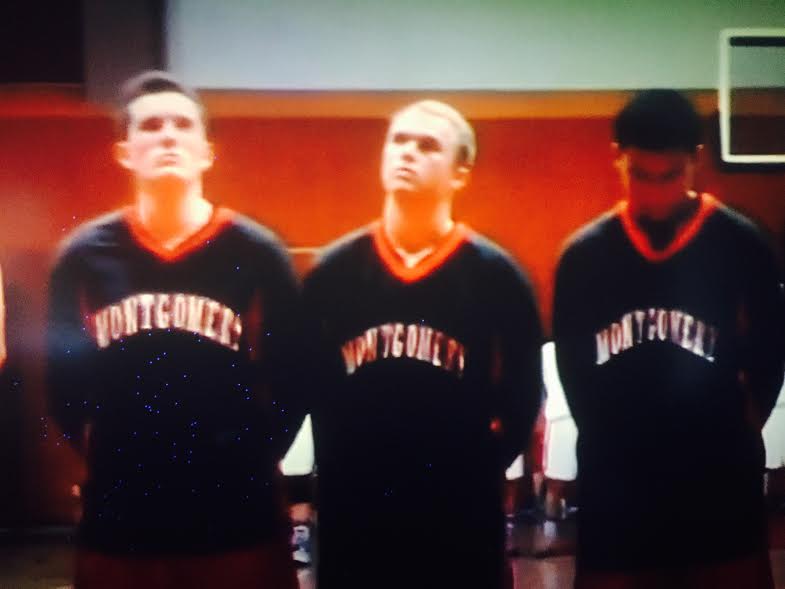 It wasn’t a thing of beauty, but it works.
The Montgomery Vikings Boys basketball team held off a spirited, but outsized Northgate 59-49 to move to the North Coast Section Division 2 semi-final.  The victory also assures the Vikings of a twenty win season and more importantly, at least at the moment, a berth in the Nor Cal playoffs.  Montgomery has accomplished both of those feats in five of the last six seasons.
The difference in the game, was Montgomery had some size, and Northgate didn’t.  The tallest player for Northgate is 6’ 3”.
Montgomery’s size was 6’ 11” Eric Poulsen.  Northgate did all they could to keep the ball away from him, from a fronting zone to a half-court trap.  They actually did a pretty good job, but they could only do so much.  Poulsen scored 24 points and pulled down 11 rebounds.
The height of Poulsen wasn’t the only thing that frustrated Northgate.  Another thing was the foul ratio.  Northgate was called for 26 fouls, compared to only four for Montgomery.  Part of the big difference was because of an aggressive Northgate defense.  That didn’t relate to a big difference at the free throw line until the fourth quarter.  In the first three quarters, Montgomery shot three free throws.  The dam broke in a fourth quarter, a quarter that didn’t seem like it wanted to end.  Montgomery went to the free throw line 18 times, and they took advantage by hitting 17.
Montgomery took the lead for good on a three point shot by Jack Fitchie with two minutes left in the first quarter.  That started a 10-2 run, which gave them a 17-11 lead after one.  Even though they led the rest of the way, Northgate wouldn’t go away.  A big moment was at the end of the first half.  Northgate trailed 25-23 and had the ball in position to set up for the last shot.  They missed a three point shot and gave Montgomery enough time to get back down court. Fitchie hit another three point shot that gave the Vikings a 28-23 halftime lead.  Fitchie scored 12 points, hitting six of six from the line during the fourth quarter free throw barrage.
The third quarter belonged to Poulson.  He scored all of the Viking’s eight points and pulled down six of his rebounds. Northgate didn’t seem intimidated by Poulson as they tried to attack him,but that was like hitting your head against a wall.  Their brain might have wanted to attack, but there heart wasn’t in it, as at times they threw up some bad shots knowing he was in the area.
That set up the Montgomery free throw shooting practice in the fourth quarter.  Northgate picked up the defense and at times had Montgomery in trouble, but more often than not a foul was called.  Each team scored 23 points in the quarter. Northgate was right there until an eight point run gave Montgomery a 53-40 lead with 1:15 left.  Six of the eight points were free throws.
So now that Montgomery has a Nor Cal spot sewed up, it is on to trying to win their first NCS crown since 2011.  Also each win will give them better position in the Nor Cal seedings.
This is where the No. 2 seed comes in handy, because they get one more home game in the semi-finals.
The Division 2 bracket has gone to form so the top four seeds are in the semi-finals.  Montgomery will meet No. 3 Dublin on Wednesday night.  Dublin, who is 18-10 on the season, defeated Concord 66-47 in their second round game last night.
The other semi-final is No. 4 Las Lomas at No. 1 El Cerrito.  Both teams won their second round game by over 20 points. El Cerrito defeated Newark Memorial 65-39.  Newark Memorial won the last three Division 2 section championships.
DIVISION 2 BOYS
No. 1 El Cerrito 65 No. 9 Newark Memorial 39
No. 4 Las Lomas 72 No. 5 San Marin 52
No. 2 Montgomery 59 No. 10 Northgate 49
No. 3 Dublin 66 No. 11 San Lorenzo 47
SEMI FINALS (WEDNESDAY…BOTH GAMES AT 7 PM)
No. 4 Las Lomas (19-9) at No. 1 El Cerrito (27-3)
No. 3 Dublin (18-10) at No. 2 Montgomery (20-10)
DIVISION 1 GIRLS
No. 3 Clayton Valley Charter 67 No. 6 Santa Rosa 63
The concussion problem that plagued Devin Murray’s season popped up again.  The symptoms came up during practice and she couldn’t play.
Santa Rosa fell behind Clayton Valley Charter early, but was always in range before dropping a four point decision.  Kylie Oden, in her last game scored a game high 24 points.  Sophomore Emily Codding added 18.
Santa Rosa ends the season 21-9
DIVISION 2 GIRLS
No. 3 Windsor 57 No. 6 Alameda 54
No. 2 Dublin 70 No. 7 Montgomery 38
Montgomery ends the season 14-15
No. 1 Carondelet 84 No. 8 Ukiah 32
Ukiah ends the season 16-12
No. 13 Novato 48 No. 5 Pinole Valley 42
SEMI FINALS (Wednesday at 7 pm)
No. 13 Novato (18-11) at No. 1 Carondelet (26-2)
No. 3 Windsor (18-11) at No. 2 Dublin (24-3)
I got lazy last night. Was planning to head for Windsor, but took the shorter trip to Montgomery.
Looks like I missed a heck of a game.
After trailing most of the game, Windsor rallied late to take the win over Alameda. Jessica Barbosa scored 18 points including the score that put the game away. Hannah May, who assisted on the last score, added 17.
The monster in the bracket No. 1 Carondelet appears to have gotten a break in the bracket (like they needed it) with the win by No. 13 Novato, who is the only double seed to advance to the semi-finals is any of the Boys and Girls brackets last night in Division 1, 2 and 3.
My email address is jacpasquini@comcast.net
You can also now follow me at twitter @homer2612