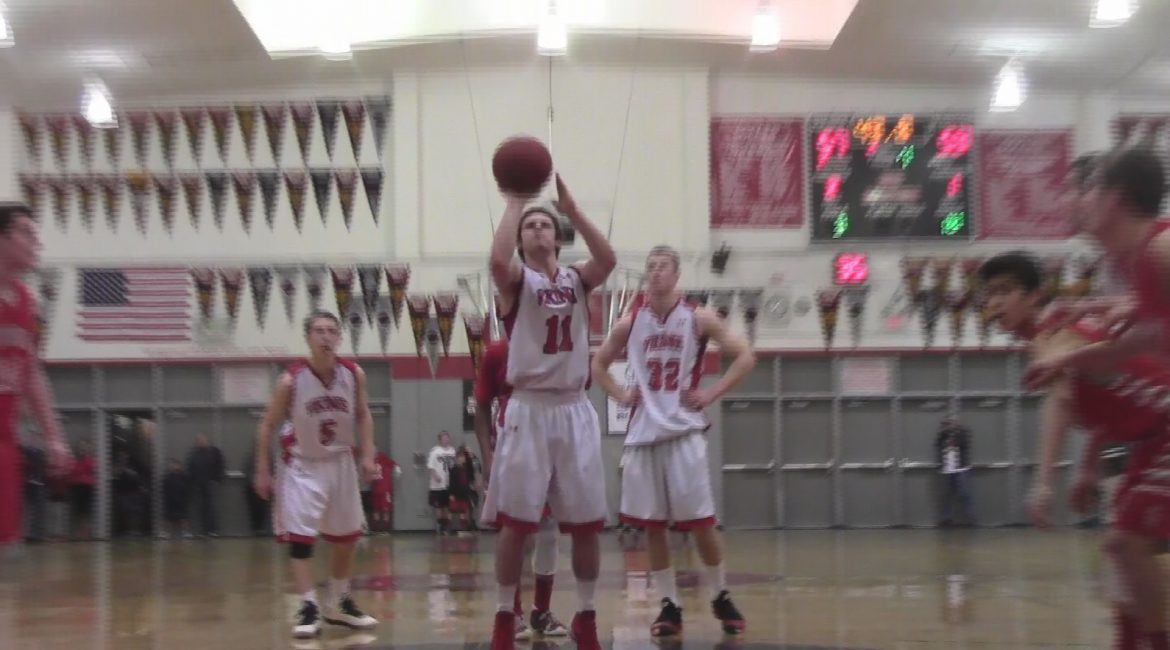 Two major runs, the three point shot and Morgan Bertsch.   That is the combination that gets Santa Rosa to a North Coast Section Semi-Final and the Nor Cal berth that goes with it.

No. 3 Santa Rosa defeated No. 6 Foothill 69-56 and now once again, they are holding their breath because of an injury.  Stop me if you have heard this before when talking about Santa Rosa and believe me they would like to stop talking about this stuff, but we are talking head injury again.  This time it is NBL Co-Player of the year Katie Daly, who went down early in the third quarter, hitting her head on the floor as she was fouled and she didn’t return.  She seemed okay after the game, but will be watched as they get closer to the next game, which is Wednesday at No. 2 Berkeley.

Santa Rosa has done this before.   The same thing happened to Bertsch, who is the other NBL Co-player of the year, in the second game and the first loss against Cardinal Newman and it cost her a week of playing and practice time.

The Santa Rosa defense clamped down and held Foothill without a field goal as they went on a 15-3 run to take a 48-25 lead, which would equal their biggest lead of the game.  Bertsch scored six points during the run and the other half of the twin towers Devin Murray added five of her sixteen points.

The fourth quarter turned painful and not because of another injury.  Foothill went on a 7-0 run in a :45 span to cut the lead to 55-41.   Still a safe lead,  but the run gave Foothill false hope and they started fouling.  Santa Rosa would only score one field goal the rest of the way, but Fortuna never got closer than 11 as Santa Rosa was money from the foul line hitting, 15 of 21 in the final quarter, including 11 of 13 in the last two and a half minutes of the game.   Murray hit five of six during one stretch and freshman Emily Codding went six of seven on here way to 15 points.

Yes, the Santa Rosa offense is more than Bertsch. The Panthers had four in double figures.  The other was Kylie Oden, who was a big part of run No. 1 which gave Santa Rosa an early lead.  She hit two of her three first quarter 3’s as Santa Rosa scored 12 straight to end the first quarter and give them an 19-8 lead.   The outburst was part of a ten point game for Oden.

If there was one part of the game that Santa Rosa struggled it was taking care of the ball.   That was the direct result of the injury to Daly.  Santa Rosa had one first quarter turnover, but ended with 21, fifteen in the second half.

Santa Rosa is having a record year for the school as they go to 27-3 on the season and have qualified for the Nor Cal for the second time in school history, the first time three years ago.

With a trip to Berkeley next, it is monster week for Santa Rosa.  You could make a strong case that Berkeley has dominated the NCS Division 1 basketball world more than any other program in any sports except for the De La Salle football program.   At one time they won nine straight section championships.

It is a major step into the big time.

THE REST OF FRIDAY

It started out easy, but turned out to be far from it, as Montgomery holds off Redwood to get the win.

NBL player of the year Alec Raven showed a reason he got that honor scoring 33 points and hitting 14 of 18 free throws. He Scored 12 in that first quarter run that set the tone for the game.

Montgomery, who is 25-5 on the season, will host No. 4 Concord next Wednesday.   On Friday, Concord went overtime to defeat Las Lomas 70-62.

In the other side of the bracket No. 14 Washington did it again.  They defeated No. 6 Dublin 52-46 and will meet the winner of today’s Maria Carrillo-Newark Memorial which tips off at 1:30.

On February 13th, Ukiah edged Windsor 46-44 to end the regular season.   It was like a playoff game as they needed to become eligible for the NCS Division 2 playoffs.

The Wildcats are taking advantage of the chance and doing a great job playing the role of Cinderella.   For the second time in 72 hours they went on the road and pulled off a playoffs win.  The two wins have been by a combined three points, which means the last three has been by a combined five.

Ally Milone scored 11 of her 16 points in the fourth quarter.   Ukiah led most of the way and held off Windsor at the end.

Windsor is 20-9 on the season and may not be done.    They will be rooting for Carondelet to win the Section Championship and if they do they would move up to the Open Division in the Nor Cal playoffs and might leave a spot for Windsor in the Division 2 bracket.

In the loss to Clayton Valley Charter, Casa Grande fell behind early and finishes the season 16-13.

Clayton Valley Charter the No. 3 seed is 22-6 on the season and will host Ukiah on Wednesday.

Jenna Petray hit a late three and scored six of her game high 20 points in the overtime as Analy rallied for the win.

The Lady Tigers were  11 down in the third quarter before going on a 15-0 run.

They fell behind again in the fourth when Petray hit a three late and Nacala Newman scored her only points with two free throws to force the overtime.  Free throws were one of the big stories of the game as Analy went 18 of 24 while San Marin hit 17 of 32.

Kaleah Williams was the leading scorer with 16 points, 12 of them in the first half.

The Petaluma loss was the last in the thirty six year coaching career for Doug Johnson.

Petaluma cut a 15 point lead to five in the fourth quarter before the rally was cut short.   Joelle Krist led Petaluma with 20 points.

Petaluma finishes the season at 19-11.

Gretchan Harrigan scored 26 points to help SRJC rally to a first round win.    The win raises SRJC record to 20-10.

SRJC was 17 down in the first half and cut it to 11 by the half.   They didn’t take the lead until Stephanie Sack it a 3 pointer with eleven minutes left.   Sack was four of six from three point range which was part of a 16 point night.

SRJC will host the winner of tonight’s Diablo Valley College-College of Sequoias match up in the second round on Wednesday.

SRJC Men try to match the Women getting win No. 20 and join them in the second round of the State Playoffs.

If they win the Bear Cubs will host No. 6 Ohlone on Wednesday.