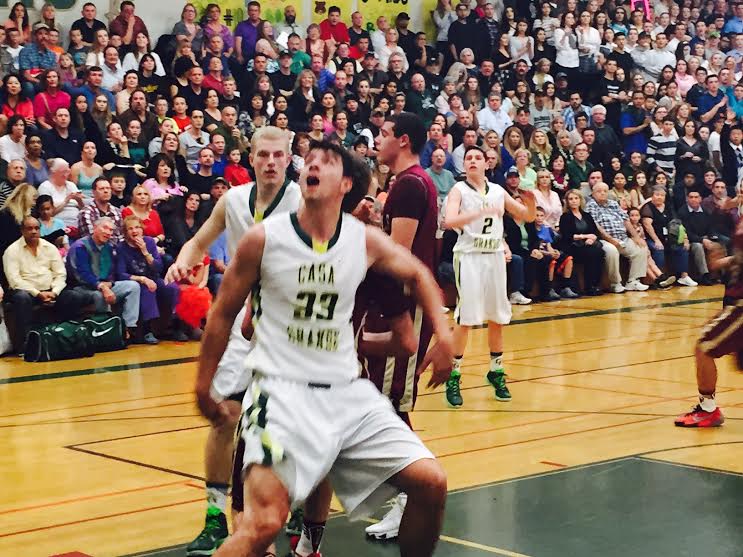 At the beginning of the season, the thought was that the North Bay League Boys’ Basketball race would be between Cardinal Newman and Montgomery.  It went a different route, but when it was all said and done, that is what it turned out to be.  Both teams won on Friday night and finished in a first place tie for the North Bay League Championship.


It is being reported that Cardinal Newman gets the automatic bid to the North Coast Section playoff because of numbers drawn before the season.  Not that it matters that much, because both teams will go, but that is not true.  The team that does best in the NBL post season tournament will get the automatic bid.  If both teams lose in the first round, then it will revert to the numbers and Cardinal Newman will get the bid.
Cardinal Newman had to go into a packed Big House at Casa Grande to get its share of the title and they came away with a 57-50 win in a game that wasn’t as close as the score indicates.
After a start three lead changes and two ties, Cardinal Newman took the lead for good when Gunnar Walker returned an offensive rebound for a score to make it 11-9.
A six point run midway through the second quarter made it 25-17.  Casa Grande would act like they would get back into the game, but every time Cardinal Newman had the answer.
Casa Grande was carried in the second half offensively by Jon Christy, who scored 16 of Casa Grande’s 26 second half points on his way to a game high 26.
When trying to get back in the game, Cardinal Newman would get an offensive rebound to come up with a basket.  It happened in the third quarter after Cardinal Newman had seen its first double digit lead cut to six.  Jamon Roberts scored his only points of the night after getting an offensive rebound.

That started a 10-3 run which gave Cardinal Newman its biggest lead of the game at 45-32.  During the run, sophomore Damian Wallace scored eight straight Cardinal Newman points, hitting two three’s.  It was part of his 12 point game, all which were scored in the second half, just behind the team’s leading scorer James Ryan who had 14.
The defining moment of this race was the first time the teams met, when in the last thirty seconds Cardinal Newman scored 12 points to steal a 60-54 win.  That seemed to be on the minds of both teams down the stretch as time out after time out was called in the last ten seconds with Cardinal Newman having a seven point lead.
Cardinal Newman ends the regular season 24-2.
WATCH VIDEO HIGHLIGHTS HERE

FRIDAY RESULTS
NORTH BAY LEAGUE
No. 3 Cardinal Newman 57 No. 1 Casa Grande 50
No. 2 Montgomery 66 Santa Rosa 42
No. 7 Windsor 60 Maria Carrillo 42
Ukiah 68 Rancho Cotate 52
NORTH BAY LEAGUE POST SEASON TOURNAMENT
WEDNESDAY
No. 4 Windsor at No. 1 Cardinal Newman
No. 3 Casa Grande at No. 2 Montgomery
FRIDAY
CHAMPIONSHIP GAME AT SRJC
SONOMA COUNTY LEAGUE
No. 4 Elsie Allen 47 No. 8 Sonoma Valley 21
No. 5 Piner 63 Healdsburg 46
Petaluma 52 El Molino 43
No. 9 Analy BYE
Elsie Allen ends the best regular season in school history with an impressive win over Sonoma Valley.  The win gives them the school’s first ever outright league basketball championship.
There will be more on one of the best stories in many years on the local basketball scene coming soon.
SONOMA COUNTY LEAGUE POST SEASON TOURNAMENT
WEDNESDAY
No. 4 Sonoma Valley at No. 1 Elsie Allen
No. 3 Analy at No. 2 Piner
FRIDAY
CHAMPIONSHIP GAME AT EITHER ELSIE ALLEN OR ANALY-PINER WINNER
My email address is jacpasquini@comcast.net
You can also now follow me at twitter @homer2612
Share