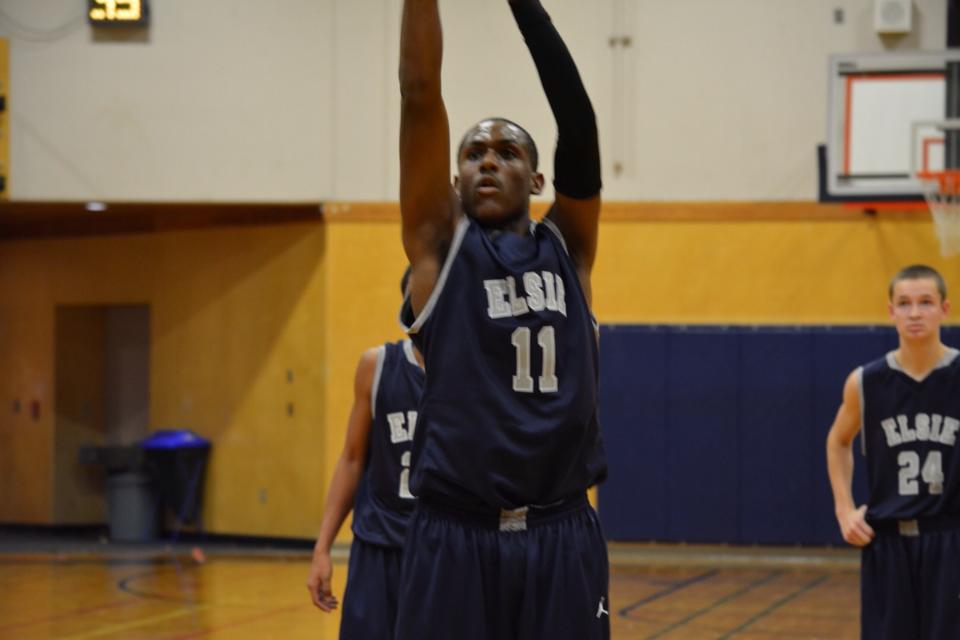 It what has to rank as one of the best sports wins in school history.  Elsie Allen went on the road to the Sonoma County League dynasty that is Analy and took a 56-48 win.
The game also spotlighted one of the most unknowns in the area, Elsie Allen’s Jalen Busby put on a show and put himself into the conversation for the Player of the Year.  He was unstoppable. Well unstoppable by Analy, when he was in the game.  He spent the night hampered by foul trouble, which took him out of the games for long stretches of time and still scored a game high 24 points, basically taking any shot he wanted.
Fouls would be an issue in the game, especially in an agonizing first half in which twenty three fouls were called and thirty free throws were shot.  Through all that, a Busby basket nearly three minutes in gave Elsie Allen a 5-3 lead.  They would lead the rest of the way.
It is almost remarkable to say that, considering how bad the foul situation got.  Elsie Allen committed its seventh team foul to put Analy in the bonus before the first quarter was over.  Analy couldn’t take full advantage of the situation.  A 62% free throw shooting team on the season, they hit 8 of 18 in the first half and 15 of 31 in the game.
The foul situation was so bad for Elsie Allen that there was one stretch from the mid second quarter to midway through the third, that every foul called was either the third or fourth on the person who committed it.  The biggest one was a questionable offensive foul call on Busby, with 2:23 left in the second quarter, that took him out of the game.  At the time the Lobos led 29-24.
Despite all that, Elsie Allen got some good minutes from the bench and didn’t get give up the lead.  The difference maker in this game, when he was in it, was Busby.  He scored six of the Lobo’s first ten points as they jumped out to a 10-5 lead. Then he scored the team’s first nine points of the second quarter, as they stretched out to a 23-14 lead.
Analy is a proud champion and they would test Elsie Allen to see how serious they were about this.  Even though Elsie Allen led most of the game, for the most part Analy was one run away from getting the lead back.  It was a run that wouldn’t come.
The big moment was at the start of the fourth quarter. Analy got as close as they would get in the second half ,when Jack Newman buried a three to end the third quarter, to make it 42-38.  The crowd, which was mostly Analy fans, was rocking and it felt like the momentum was all Tigers, but Elsie Allen responded in a big way by scoring the first six points of the fourth quarter.  The last three came on a shot by Carlos Bahena, who got a shooters roll for his only points of the night.  That gave Elsie Allen its biggest lead at 48-38, with 4:50 to go.


Analy would take one more shot to get back in. After the lead was cut to 50-44 with 2:10 left, Bradley Greiner answered for Elsie Allen by taking the ball the length of the court and ending the journey with a layup.  Analy would miss two free throws, Busby hit two free throws and Elsie Allen had its historical win.
Analy had three players score in double figures, lead by Chance Ortega with 16 points.  Greiner and Gage Smith each scored nine points for Elsie Allen, Smith scoring seven of his in the first half.
Busby hit the twenty point mark for the sixth time in seven games and is now averaging 19.7 a game.  He also collected a game high ten rebounds for his fifth double-double of the season.  There are three other games this season in which he missed the double-double by one rebound.
The loss ended an eighteen game home SCL winning streak for Analy.  The last time Analy lost a league home game was on January 19th, 2012, when Windsor took a 73-55 win.  Just as important, if not more important, the win puts Elsie Allen in a virtual tie for first place with Analy and Piner in the SCL race.

FRIDAY RESULTS
BOYS
NORTH BAY LEAGUE
No. 1 Cardinal Newman 71 No. 9 Ukiah 46
No. 2 Montgomery 69 Rancho Cotate 33
No. 6 Casa Grande 61 No. 7 Windsor 45
Santa Rosa 53 Maria Carrillo 42
LEAGUE OVERVIEW:  Casa Grande wins its showdown for first with Windsor and has a six game winning streak…The Gauchos also have a one game lead over Cardinal Newman, Montgomery and Windsor…Next week’s schedule includes Windsor at Montgomery on Tuesday and Montgomery going to Casa Grande on Thursday.
WATCH VIDEO HIGHLIGHTS HERE
SONOMA COUNTY LEAGUE
No. 3 Piner 60 Sonoma Valley 51
No. 4 Elsie Allen 56 No. 8 Analy 48
Petaluma 51 Healdsburg 39
El Molino BYE
LEAGUE OVERVIEW:  Analy, Elsie Allen and Piner each have one loss.  Elsie Allen has had the league bye so Analy and Piner has one more win…
NCL I
Middletown 41 No. 5 Cloverdale 35
Lower Lake at No. 10 Willits
No. 10 Willits 44 Lower Lake 33
Fort Bragg 47 St. Helena 42
Kelseyville 85 Clear Lake 78
LEAGUE OVERVIEW: Cloverdale dodged a bullet earlier in the week at Lower Lake.  They couldn’t do it this time taking a loss at Middletown.  Cloverdale, Kelseyville and Willits are all 3-1.
GIRLS
NCL I
No. 7 Middletown 43 Cloverdale 37
Willits 57 Lower Lake 45
Clear Lake 48 Kelseyville 43
Fort Bragg at St. Helena (No result)
LEAGUE OVERVIEW: Cloverdale was the last undefeated team in league.  Cloverdale, Clear Lake, Middletown and Willits are all 3-1. On Tuesday Clear Lake is at Middletown.
JC
MEN
SRJC 76 Sacramento 72
WOMEN
SRJC 57 Sacramento 55
The JC Men are 3-1 in conference and in a first place tie with San Joaquin Delta, who handed SRJC its only loss on January 9th, 61-60.
SSU
MEN
Stanislaus State 73 Sonoma State 70
WOMEN
Stanislaus State 82 Sonoma State 69
SAT: Both teams at Cal Poly Pomona
My email address is jacpasquini@comcast.net
Share