Girls Basketball Then and Now- Cardinal Newman on a Historic Run 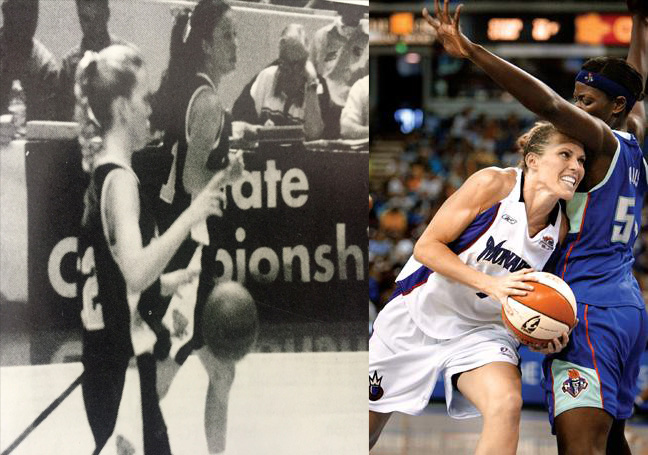 The Cardinal Newman girls’ basketball team is in the midst of an outstanding season, rolling undefeated through the North Bay League after a grueling preseason schedule.

But while the Cardinals (21-4 overall, 13-0 NBL) are undeniably the top girls’ team in Sonoma County this year, do they deserve to be considered among the best ever squads to come out of this area?
“No, we have a lot more basketball to play,” says Monica Mertle, in her fifth year as head coach. “Where we fit in the big picture is yet to be determined.”
Which teams should be mentioned in that “big picture” depend in part on whom you talk to, how long they’ve been in the area and other intangibles.
In speaking with local coaches and fans, the names of a few schools keep popping up.
That would include coach Harry Tappin’s Healdsburg teams of the late 1980s and early 1990s.
You also have to list coach Mark Rigby’s Ursuline teams of the early 1990s.
What about coach Doug Crouse’s 1997 Rincon Valley Christian team?
And let’s not forget about coach Doug Johnson’s 2000 team that made it to the CIF Division III championship game in Sacramento.

That’s a pretty exclusive group, although other schools have certainly had outstanding seasons, including Montgomery and Maria Carrillo and Healdsburg, Ursuline, RVC and Petaluma have also had a lot of good seasons.
Tappin’s teams made it to the CIF finals two years in a row, in 1991 and 1992, losing both times, and won North Coast Section championships in 1987 – when Tappin’s daughter Cheree was a distance shooting star before the the 3-point line for girls – 1989 and 1991.
Tappin is a school teacher in Cloverdale, and is coaching a fourth-grade boys’ basketball team, which includes her son. She still holds the NCS Division II single-game scoring record of 42 against Drake.
In 1991, the Greyhounds lost to Palos Verdes, 58-42, but came close to upsetting Brea Olinda in 1992.
“We had a chance to win it at the end,” said Tappin. “We had the ball and our best 3-point shooter was wide open but we were called for a traveling violation and lost the ball.”
Tappin’s system was used not only at Healdsburg junior highs but also at the elementary level, prompting him to say, “when I got a girl as a freshman, she already knew what we were doing.”
The longtime Healdsburg coach wouldn’t single out a “best” or a “favorite” team because “I never felt one was better than the other.”

Rigby had a lot of outstanding teams, but 1990-91-92 were particularly impressive.
In 1990, the Bears, were ranked No. 1 in the state in Division IV most of the season before losing in the NorCal final to Campolindo. The 1992 Bears were 32-2 but lost to El Camino in the NorCal semifinals.
But in 1992, led by three-time all-state performer Joy Durand, “it all came together . . . the seniors played like seniors,” recalled Rigby, whose team defeated Santa Ynez in the CIF final, 61-59.
“Shannon Crouse had a great game because Santa Ynez was so focused on Joy,” says Rigby. “We called time out with the score tied at 59 and ran a play . . . Michaela Canova was wide-open under the basket and that did it.”
The 2002 Ursuline team, with Mertle in the lineup, went 32-2 before losing to Marin Catholic in the NorCal Regional finals.

Rincon Valley Christian, with Erin Buescher and Leslie Dubois – transfers from Rancho Cotate and Ursuline, respectively — leading the way, cruised to the 1997 Division V CIF title, going 29-4 and beating El Cajon Christian (29-2), 53-38, with Buescher getting 25 points, 25 rebounds, four blocks and three steals, definitely one of the all-time championship efforts. The Eagles also held El Cajon to 24% shooting from the field and outrebounded El Cajon by 19.
Petaluma, one of the oldest schools around (1873) had a great four-year run, culminating in a trip to the 2000 Division III CIF finals at Arco Arena, where the Trojans fell to Bishop Montgomery (29-3), 57-45.
Kristina Blair led the Trojans (30-7) with 17 points, 14 rebounds, and Val Leoni added 11. Coach Johnson recalls Janelle Lombardi keeping the Trojans in the game with some early points. Petaluma had lost one of its scoring leaders, Renee Maxie, during the postseason playoffs.

He agrees that teams from Healdsburg, Ursuline, RVC and Petaluma definitely belong in the conversation and thinks his 2007-2008 Puma team led by Amanda Johnson that finished 29-2 also deserves mention. She went on to play at Oregon, had a brief stint with Phoenix of the WNBA and then played in Europe. The Pumas ran off two outstanding seasons (24-5 and 22-5) prior to the 29-2 effort.
“Unfortunately Carondelet and Northgate were both outstanding that year, and NCS only took the top two,” Azevedo said, adding he recalls Carondelet being the only NorCal team to win a state title that season.
Coaches who produce good teams usually have a lot of things in common, but one factor seems to stand out: To be the best you have to beat, or at least play the best . . . in other words, don’t book weak teams in the preseason.

“I followed Harry Tappin’s blueprint to play non-league games against tough teams outside the area,” said Rigby, a philosophy shared by Mertle. “Harry was one of the first coaches I know to do that . . . Ron Wheatley (Novato) did that and won a state title in 1985 and we were close to him, adding “Monica is doing that now.”
“Our non-league schedule is so difficult, but we definitely buy into that philosophy of playing tough teams,” said Mertle, who also likes to play challenging non-league opponents during the league season, scheduled top teams like Clovis West in January.
“We led most of the game although we ended up losing (57-48), but we know we can play against the best teams,” said Mertle, who was born in 1985 so was a little girl when Ursuline was dominating the local basketball landscape but has an interesting connection to the great Bear teams of the past.
“I had Joy Durand as a coach at St. Rose starting in fifth grade,” Mertle revealed. “My dad (Tom) wanted me to have a female coach, a role model and we got a great one.”
Mertle learned about Ursuline’s success “through Joy . . . she knows the game so well and we have talked a lot about coaching.” She also credits skills coach Vince Shaw (Napa Valley College women’s coach), who served as a personal trainer.

Durand, one of the best female high school players to come out of Sonoma County, admits it’s “tough to define that ‘thing’ that transforms a good team into a great team,” but concludes “great teams are characterized by a special combination of factors that are hard to define and even harder to replicate.”
Durand, Sonoma County attorney, adds “great teams have all the characteristics you would expect: athleticism, skill, intelligence, discipline, heart, determination, work ethic, focus and respect for each other and for their opponents.”
But, she continues, “great teams are composed of individuals who understand and appreciate their respective roles on the team because everyone cannot start or play every minute . . . individual players on great teams understand the realities of playing on a team and contributing wherever and whenever they can.”
Rigby recalls Durand as “our key ingredient . . . she made us all better.”

Mertle, who first thought of becoming a coach when she was in high school, has watched her Cardinal Newman teams – the school went coed in 2011 – go 13-15, 16-9, 24-8, 26-7 and 22-4 this year so far.
Losses have come against Clovis West, Inderkum of Sacramento (47-45). McClatchy of Sacramento (43-35) and Sacred Heart (54-50). The Cardinals also have a January non-league win over West Campus of Sacramento (63-37) and December non-league wins over Menlo-Atherton (62-51), Jesuit of Colorado (47-34), Davis (59-33), Piedmont (54-40), St. Ignatius (72-38) and Palisades (60-50).
In the NBL, Newman has averaged close to 80 points a game while limiting opponents to an average of 30. The Cardinals also now have the record for consecutive league wins at 38, having snapped the mark set by teams starting in 2001 when Mertle played for Ursuline as a sophomore.
This year’s team is young – no seniors, four juniors, five sophomores, one freshman – so Mertle realizes the potential for getting even better next season and beyond.
“Our main thing is to work hard, handle business and not assume anything or take anything for granted,” said Mertle. “The kids buy into my philosophy, what we want to accomplish.”
She adds she is “open and honest with players, and this team has improved so much . . . very unselfish . . . this has been an exciting season.”
As far as the postseason, Mertle sees teams such as Salesian, St. Mary’s Berkeley and Arcata among the top challengers.
And, she emphasizes in response to her youthful roster: “Age is just a number . . . the only stat that really matters is ‘did you win the game.’”