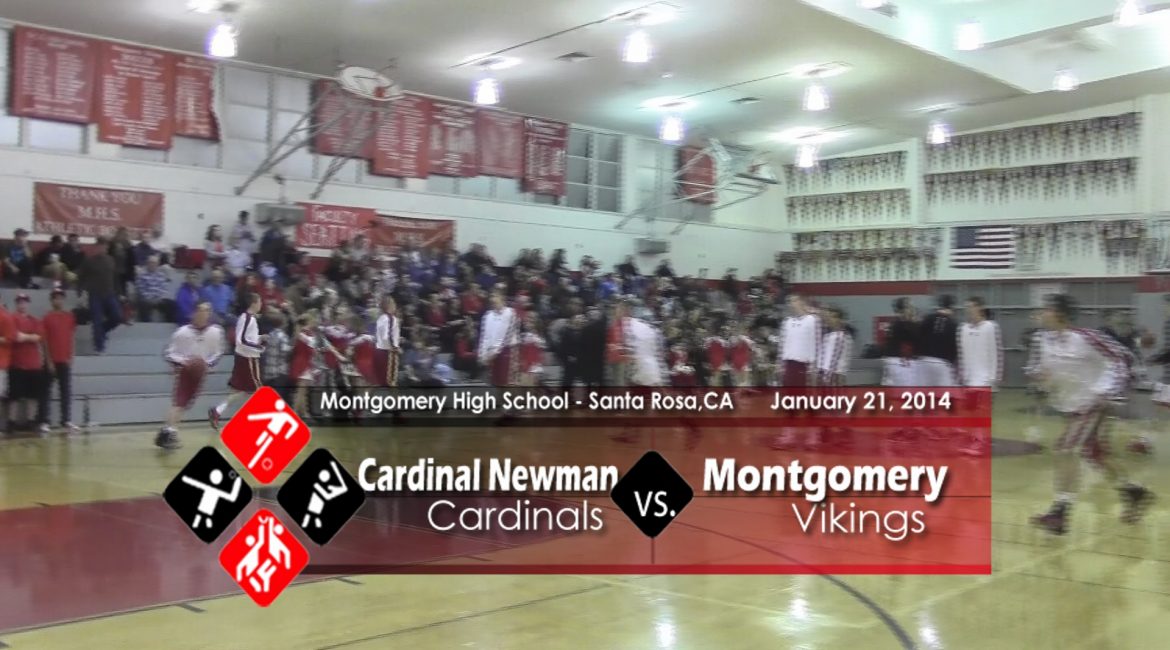 The NBL and SCL Girls have the stage on Friday Night.  Two weeks ago when that happened, the crowds came out in big numbers and in one case, record numbers.  That night each league had a game for first place which helped the draw.   There isn’t that first place game this time, but there is one game in particular that could have some wide ranging consequences.

When Cardinal Newman meets Montgomery in Boys Basketball it is usually headline news with a league title is usually on the line and it usually turns out to be a pretty good game.

It isn’t too different when the Girls meet.   There isn’t a league championship at stake in this game, but still plenty is.

No. 2 Cardinal Newman is at No. 5 Montgomery and both teams need a win to help its cause in its part of the league world.

Cardinal Newman tries to move one step closer to making next Thursday’s league finale home game with Santa Rosa mean a game for a league championship.   They go into the game 17-6 overall and 10-1 in league play, which is one game behind first place Santa Rosa.

On Wednesday, Cardinal Newman pulled away in the second half and defeated Maria Carrillo 59-28.  Tiffany Salinas scored 22 and Hailey Vice-Neat had a double-double with 10 points and 16 rebounds.

Montgomery is hoping its game with Casa Grande the same night that Santa Rosa and Cardinal Newman play will be a battle for the final spot in the North Bay League post season tournament.   The teams are tied for that final spot at 5-6 and are coming off losses.

Casa Grande didn’t get the offense going until it was too late scoring 14 points in three quarters.  They doubled that in the fourth quarter in a 34-28 loss to Ukiah.

Montgomery had the same problem with No. 3 Windsor.  Both teams did as Windsor led 13-10 at the half.

It was a different game in the second half. Montgomery led 17-16 when Windsor went on a 10-0 run and Montgomery didn’t get closer than six.  Kerianne Noonan and Jessica Barbosa combined for 31 and each scored five during the game deciding run.

Windsor is in a solid third place and has all but wrapped up a spot in the NBL post season tournament.

Meanwhile No. 1 Santa Rosa continues to roll with a 83-46 win over Rancho Cotate.   Morgan Bertsch just missed another double-double with a 20 points nine rebound game.  The Panthers have won 16 straight and are 22-1 on the season.

Santa Rosa and Cardinal Newman have clinched a spot in the NBL post season tournament.

Analy is off on Friday as they sit on verge of winning the SCL championship for the third time in five seasons.   The Tigers have a two game lead with two games left.

The score was a shocker.

The SRJC Women were beaten in the Big 8 league race for the first time.  That wasn’t such a surprise since they were on the road at second place and No. 10 San Joaquin Delta.   The final of 71-50 was the shocker part.   They trailed 30-15 at the half.

The good news is it only counts as one loss and SRJC still have a one game lead over San Joaquin Delta with five games to go.

Other good news is that Gretchan Harrigan scored 26 points, which is her average.   She still leads the state in scoring.

SRJC is at Sierra on Friday and neither team will be in a good mood.    Sierra also lost on Tuesday to Diablo Valley 87-80 and they remain two games back of SRJC in the Big 8 race.

The SRJC Men had a better night at San Joaquin Delta taking a 79-74 win.    Matt Hayes and Alec Kobre combined for 46 points to raise their record to 14-6 and stay one game behind first place Cosumnes River.   SRJC was back in the top twenty at No. 19.

No. 3 Willits edged Cloverdale 49-47 to take a firm grab on the NCL I Boys race.   The Wolverines have won 17 straight and are 19-2 on the season.   They will try to hit the twenty win mark for the second straight season when they host Fort Bragg on Friday. Willits has a three game lead with five to go…We could have are first league champion by the end of Friday Night.    That would be the No. 4 St. Vincent Girls who has a two game lead in the NCL II race.  A home win over Rincon Valley Christian on Friday will give them a two game lead over Roseland University Prep with two games to go.  They are 2-0 against the Knights and have the tie-breaker.