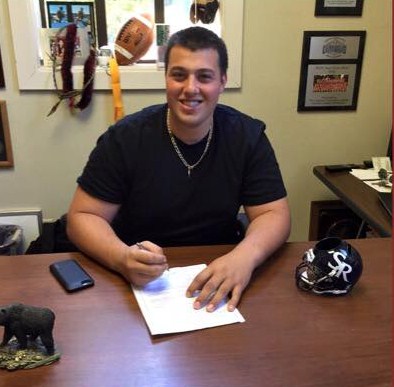 Santa Rosa JC OL Giuliano Cattaneo has signed with the Bobcats and will be eligible to play this season. Lead Reporter Keff Ciardello has the story.

After a visit to San Marcos last weekend and taking a few days to discuss his options, Santa Rosa JC offensive lineman Giuliano Cattaneo has decided to become a Texas State Bobcat. He signed his paperwork earlier today and will report to fall camp, where he will be eligible to play right off the bat.

“I signed earlier today, about an hour ago,” said Cattaneo. “I went home after my visit and spoke to my coaches and family members. After a few days of discussion, I decided to sign. I’ll report for fall camp in early August and then I’ll be eligible to play immediately.”
He fell in love with San Marcos and the TXST campus, but he also said playing in the same state as his twin brother, Dante, who will be playing at Lamar, helped his decision.
“Going down to San Marcos last week, it just felt like home. The coaches and the program overall persuaded me. It definitely helps being that close to my brother.””I like the town. It’s very similar to where I’m from. A little hotter, of course, but it’s real similar. It has a great overall college town feel. I visited the business department, which I plan on majoring in. It’s a wonderful department. Talking to the players and coaches, I could feel a team vibe, a family vibe.”
Cattaneo will have two years of eligibility but he hopes to petition for a third. He was a redshirt his freshman year, then he sat out the following year with a medical redshirt after rupturing his PCL in his right knee, before playing last season. At 6’4”, 300-lbs, Cattaneo is a versatile lineman that can play any position on the line. He primarily played guard or tackle at Santa Rosa and hasn’t played center since his junior year in high school, but that is where the Bobcats envision him thriving,
“I’ll be at center and guard, but mainly going in and snapping the ball. (TXST coaches) told me that I could play on the interior and that’s the best place I could compete and immediately contribute. My goal is to go in there and compete, hopefully be starting by week 1. We’ll see how fall camp goes.”He doesn’t have a number yet but he will be assigned one when he arrives on campus in August. Expect to see him in the trenches, mixing it up in San Marcos this fall.
Share