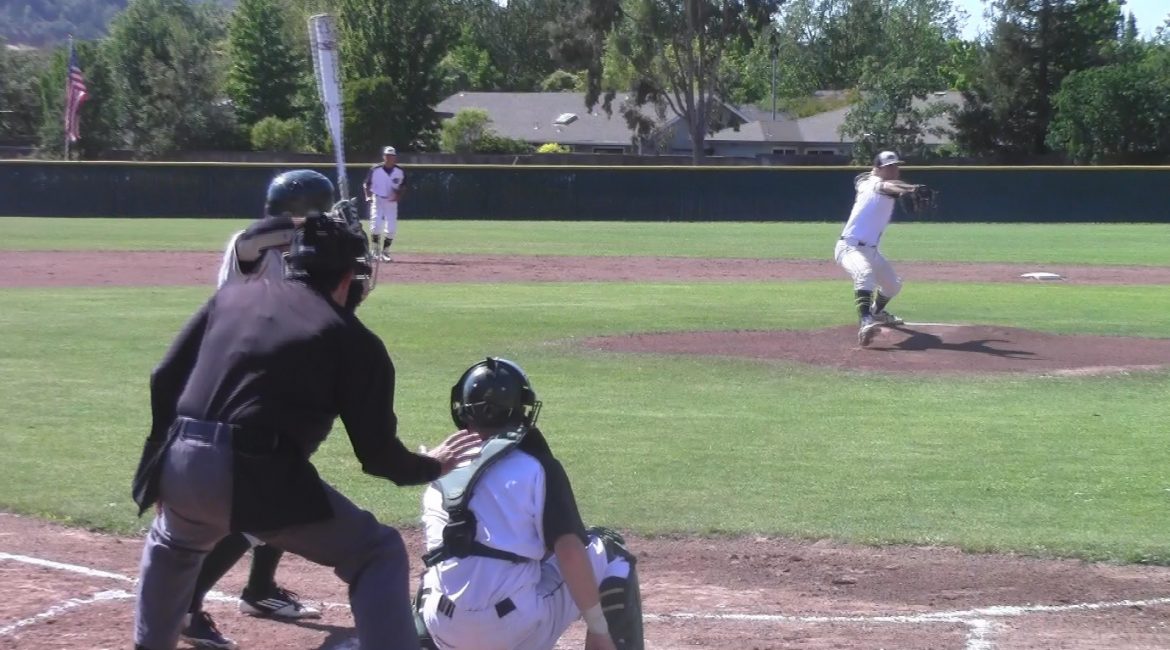 It was a pretty convenient for a fan of Maria Carrillo sports on Wednesday.  The baseball and softball teams were playing it opening North Coast Section Playoffs yards away from each other.  The way the fields are positioned and how close they are to each other, it was easy to keep track of both games.

The Maria Carrillo fan base liked the results as both teams advanced to the second round.

It was easy to focus on one game, because the baseball team didn’t have much suspense as they handled Concord 6-3.  It was 6-0 going into the seventh, when Concord made a little noise cutting the lead in half.

Zach Scott had things under control the first six innings and got the win.  Five different players drove in runs for Maria Carrillo, who led from the start, scoring two runs in the first inning, on a RBI single by Freshman Andrew Vaughn and a walk by Austin Martinez, which forced in another.  It was one of two RBI for Martinez, the other in a three run fourth which gave Maria Carrillo a commanding 5-0 lead.

Concord did have its changes having base runners on in every inning.  Scott, a lefty, picked off runners in the first two innings.  Maria Carrillo also turned a double play and threw a runner out at the plate.

It did get a little hairy in the seventh.  Jeremiah Francis, who had four of Concord’s 11 hits, hit a two run single to cut the lead to 6-3. But Vaughn did get the last two outs by the strike out to raise Maria Carrillo’s record to 18-8.

The suspense meter was a little higher on the softball field as Maria Carrillo held on for a 3-2 win over Newark Memorial.    Maria Carrillo took the win despite being out hit 11-4.  One of the Maria Carrillo hits was a two run fourth inning by Brittany Veler in the fourth, which broke a 1-1 tie.

Robin Johnson kept getting out of trouble by striking out eight as Concord left 11 men on base.  Concord had base runners in every inning but the second.   Concord scored a run in the seventh and had the tying and winning run on base when Johnson ended things with a strike out.

The win was Maria Carrillo’s 13th straight and raises the NBL Champions record to 20-5.   It is the first time Maria Carrillo has had a twenty win season in school history.

The round two games aren’t quite as convenient for the Maria Carrillo fan base.   The two teams do play an hour apart, with the baseball team playing Saturday at 1 pm and the softball team playing at 2 pm.   The problem is they play about an hour and a half from each other.

The No. 4 seed baseball team is hosting No. 5 College Park, while the No. 6 Softball team travels to No. 3 Clayton Valley.

Maria Carrillo wasn’t the only school having both teams playing from the NBL.  Rancho Cotate also did, but didn’t turn out as well, with both teams losing.

Pitching was the theme in two other local softball teams’, that along with one sided wins.

Dana Thomsen struck out a season high 15 to lead the Division 2 No. 1 seed Petaluma to a 7-0 win over No. 16 San Lorenzo.   Since an opening game loss, Petaluma has won 25 straight.

Meanwhile in Division 4, Freshman Lexie Raasch pitched a five inning no-hitter as No. 3 Cardinal Newman beat No. 14 John Swett 16-0.  After the first batter for John Swett reach on an error, Raasch retired the next 15, striking out eight in a game called after the Jon Swett fifth because of the ten run rule.

No. 5 College Park at No. 4 Maria Carrillo…Saturday 1 pm

No. 6 Maria Carrillo at No. 3 Clayton Valley…Saturday 2 pm