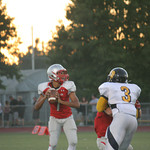 Score one for the Sonoma County League.

It is a minor one but it is one.

Analy’s win over Maria Carrillo last Friday night was the third and final game between the SCL and NBL at least. The SCL took two of three, so that means that the league has at least tied the season series with the NBL in every year since 2004.   Two of those seasons the series ended in a tie, in the other years the SCL won the series.  Overall the SCL is 48-28-4 including a sweep of twelve games in 2009.

Of course things were different with most of those seasons before realignment and all the other seasons having more games.  The SCL has in part switched from NBL games to Marin County League teams with three this weekend.

There are two more weeks before league play starts.  Two teams from the NBL and NCL world are 2-0, with three teams from the SCL reaching that mark.  Six teams are trying to go 2-0 this weekend.

There are a combined twenty two games involving the NBL, SCL and NCL with none between two undefeated teams.

If will be interesting to see how Analy reacts to its near miss against Maria Carrillo last week.   They are trying to start 3-0 for the second straight season.

If you are into the comparing score game, this is one your chance.  Miramonte’s lone loss is to Division 3 defending champion and power Marin Catholic 45-14.  Remember Analy is in Division 3 and looking to move up the pecking order into a power.

But that’s for a later moment.  Right now it’s a Miramonte team that has given Analy fits over the past few years.  Even last year when they were success in getting their record to 3-0, they needed a fourth quarter rally to pull out a 41-34.   Two years ago in the opener they were defeated 36-35 in the opener.  There years ago they didn’t lose one 14 point game to Miramonte, but two.  One was the season opener and one in the NCS playoffs.

After being replaced in the third quarter last week, Jake Royer will start at quarterback for Analy for the third straight game.  Royer has passed for 233 yards in each of the first two games.   Will Smith completed 11 of 14 for 142 and the winning touchdown pass against Maria Carrillo last week.

YSN365.COM PLAYER OF THE WEEK:

Analy Junior Wide Receiver Kerr Johnson…four catches for 154 yards in the win over Maria Carrillo.  In two games he has 13 catches for 319 yards and two touchdowns.  His receiving yardage is over half of Analy’s total.

If it will be interesting to see how Analy reacts to a near miss, think about Maria Carrillo, who did everything but win that game.

If form of the season holds, this will be a close game.  Maria Carrillo had its opening thriller against Analy and Benicia has gone overtime and scored with :18 left to defeat Windsor 34-27.

After a 54-7 win over Pinole Valley and a bye Montgomery is anxious to get back on the field.  This appears to be Montgomery’s biggest road block to logging a 3-0 start going into the NBL opener against Casa Grande in two weeks.

Dublin defeated Woodside 22-14 last week to get its first win.

Montgomery returns to KSRO.  The Vikings were in the last regular season game that was broadcast in 2004.  That is the Marcuz Ezeff game in the classic win over Cardinal Newman.  Marcus’ younger brother is on this team.

Santa Rosa also had the week off last week.  They opened with a 33-0 win at Petaluma in which they rushed for nearly 250 yards.

Both Antioch and Deer Valley, who Santa Rosa meets next week, is in the Bay Valley Conference which is the same league Pittsburg is in.  Antioch has not won more than two games in that league since 2009.

After doing next to nothing on offense in its opener against Piner, Ukiah basically did what they wanted in a win over Willits.

Oakland won its opener over Stellar Prep, a team from the NCL II, 37-8.

This is the fourth straight season the two teams have met.  Rancho Cotate has had control of things winning for four straight since losing the opener 23-21 in 2010, which turned out to be Rancho Cotate’s only regular season loss.  The four straight wins includes two playoff wins starting in 2010.

Pinole Valley is hoping to have a better trip to Sonoma County then they had two weeks ago when they lost at Montgomery 54-7.

After defeating St. Helena last week, Healdsburg goes on the road to meet an NCL I team for the second straight week.

Middletown opened the season with an impressive win over Salesian.

Don’t get caught up in the big school-small school kind of game this is known for.  Both teams are Division 4 teams, so this is a game that could be looked at come playoff time.

Both teams are looking for something positive.  The two teams were both shutout in the opener and held to six points last week.

What a difference a year makes for Kelseyville.   Last season in the opener against Upper Lake they were defeated 52-6.   This season they take a 68-8 win.

Lower Lake rushed for over 400 yards in its opening win against Marshall.  Isazah King rushed for 216 yards and three touchdowns.

Cloverdale was in the game against St. Vincent, threatening to tie the score in the fourth quarter, before they threw an interception that was run by for a touchdown.

SRJC goes for a 2-0 start in its home opener.  If you look at only at the boxscore it doesn’t read like the 54-7 win over Mendocino by SRJC.  Mendocino had more first downs and passing yards.

SRJC did have four interceptions, including one that was returned 32 yards for a touchdown by Reayon Smith, which was the game’s last score.   That was one of two defensive touchdowns for SRJC.

The win moves SRJC into No. 24 in the rankings.

Diablo Valley lost its opener to No. 1 San Francisco 41-9.

This is not only the YSN365.com game of the week, it is one of the big games in the state.   When the NCS Division 3 playoffs begin it is expected these two teams will be in the top three, which is where they were last season.   This game will probably decide where they play ig they meet again in the playoffs.

In the playoffs last year both teams took turns losing to section champion Marin Catholic who looms again this season.

In the Chronicle rankings that have De La Salle at No. 1, El Cerrito is at No. 5 and Cardinal Newman at No. 14.  El Cerrito’s loss is to No. 3 Bellarmine 28-25, a game they played without wide receiver Jalen Harvey who was ejected from Game one and had to sit out game two.  He is one of at least three players who appear to be heading to a Pac 10 school.

Most weeks this would be the game of the week.  It is between two teams that are annually in the playoffs, Napa in the San Joaquin Section. Over the past decade Casa Grande is 92-28-2 and Napa is 90-28-2.

The two teams met last season with Napa scoring two fourth quarter touchdowns to pull away for a 35-14 win.  Napa had started the season with two losses and then won seven of nine to finish the season.

Casa Grande had eight sacks in the 12-7 win over Heritage, three of them were by Daniel Greisen.  He also had two in the opening week win over Eureka.

Sonoma Valley is feeling right at home with these games against Marin County League teams.  Over the last two seasons they are 4-1 against the league, including both wins this season.

San Marin is coming off a crazy game, losing to Northgate 45-42 in a game each team scored a touchdown in each of the first three quarters.  Each team scored three touchdowns in the fourth.  The difference turned out to be an early fourth quarter field goal by Northgate.   Northgate lost to Rancho Cotate in the semi-finals of last year’s NCS playoffs.

Piner takes its shot at a Marin County League team and tries to go 3-0 at the same time.   If they do get the win, it will give them more than they had in six of the last seven seasons.

Former Piner Head Coach Matt Tomlin must feel like he is back in this area.  It is his third game as St. Bernard’s head coach and the third straight game against teams from this area.

If how they have done against the other league means anything, Petaluma has a good shot.   Petaluma got win number one last week with a 7-0 win at Tamalpais.   Terra Linda lost its first game 42-14 to Sonoma Valley.

St. Helena has defeated St. Vincent in each of the last two seasons by one sided scores.

St. Vincent’s defense has given up as many points as they have interceptions (six).  They also have seven sacks.

One of the interceptions was an 83 yard return by Zach Stichler for a touchdown in the fourth quarter to put the Cloverdale game away.

The other two touchdowns in the 21-6 win were by running back Derek Murphy who rushed for 130 yards.

St. Helena’s 16-14 loss to Healdsburg snapped a seven game pre-league winning streak.  Their last loss before league play was in 2010.

This is the third of four straight home games for Tomales, who rushed for nearly 300 yards in last week’s win over Elsie Allen.