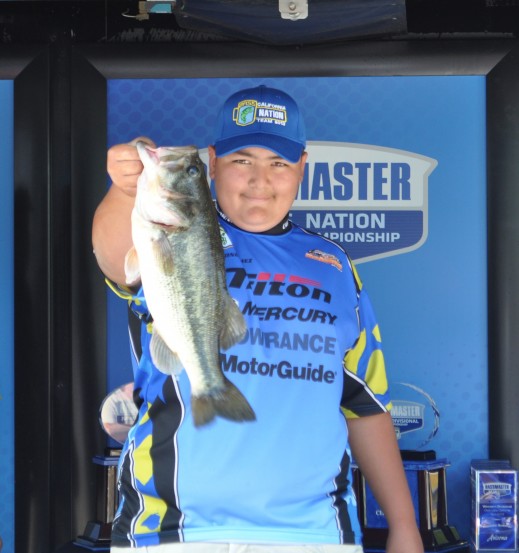 WHEN:                 Sunday, Oct. 18, 2015
WHERE:               High School Fishing Western Conference Championship
Clear Lake
Konocti Resort and Casino
2755 Mission Rancheria Road
Lakeport, Calif.
NOTES: The 2015 High School Fishing Western Conference championship is a two-person (team) event for students in grades 7-12. Registration for anglers and their coach, who will provide the boat they compete in, is online at HighSchoolFishing.org. Takeoff will be at 7 a.m. and weigh-in will be held at the boat ramp, scheduled for 3 p.m. High School Fishing takeoffs and weigh-ins are free and open to the public. For more information about this event contact the TBF National Youth Director Mark Gintert at (580) 716-4251.
A full list of all schools participating will not be available until the morning of the event. Among the teams currently eligible to compete in the High School Fishing Western Conference Championship are:
ARIZONA:
*Yuma High School, Yuma, Ariz. – Jonathan Parrish and Brett Edington
CALIFORNIA:
*Analy High School, Sebastopol, Calif. – Alec Pitts and Mike Miller
Liberty High School, Brentwood, Calif. – Brandon DeVincenzi and Josh Shapland
Freedom High School, Oakley, Calif. – Ronald Rivers Jr. and Roy Asi
COLORADO:
*Salida High School, Salida, Colo. – Morgan Fitzgerald and Kaden Sites
* denotes 2015 State Champions.
Complete tournament details can be found at HighSchoolFishing.org.
The 2015 High School Fishing Conference Championships consist of the top 10 percent from each TBF/FLW state championship field along with the top 3 teams from six High School Fishing Opens that coincided with stops on the 2015 Walmart FLW Tour. The top 10 percent of each conference championship field will advance to the High School Fishing National Championship, coinciding with the TBF National Championship and an FLW Tour stop in the spring of 2016. The High School Fishing national champions will each receive a $5,000 college scholarship to the school of their choice.
ABOUT THE BASS FEDERATION
The Bass Federation Inc., (TBF) is a member of the Freshwater Fishing Hall of Fame. TBF is owned by those we serve and dedicated to the sport of fishing. The Federation is the largest and oldest, organized grassroots fishing, youth and conservation organization there is. TBF, our affiliated state federations and their member clubs conduct more than 20,000 events each year and have provided a foundation for the entire bass fishing industry for more than 45 years. TBF founded the Student Angler Federation and the National High School Fishing program in 2008 to promote clean family fun and education through fishing. Visit bassfederation.com or highschoolfishing.org and “LIKE US” on Facebook.
ABOUT FLW
FLW is the industry’s premier tournament-fishing organization, providing anglers of all skill levels the opportunity to compete for millions in prize money nationwide in 2015 over the course of 240 tournaments across five tournament circuits, four of which provide an avenue to the sport’s richest payday and most coveted championship trophy – the Forrest Wood Cup. FLW tournament fishing can be seen on the Emmy-nominated “FLW” television show and is broadcast to more than 564 million households worldwide, making it the most widely distributed weekly outdoors-sports television show in the world. For more information about FLW visit FLWFishing.com and look for FLW on Twitter, Facebook, Instagram and YouTube.
Share