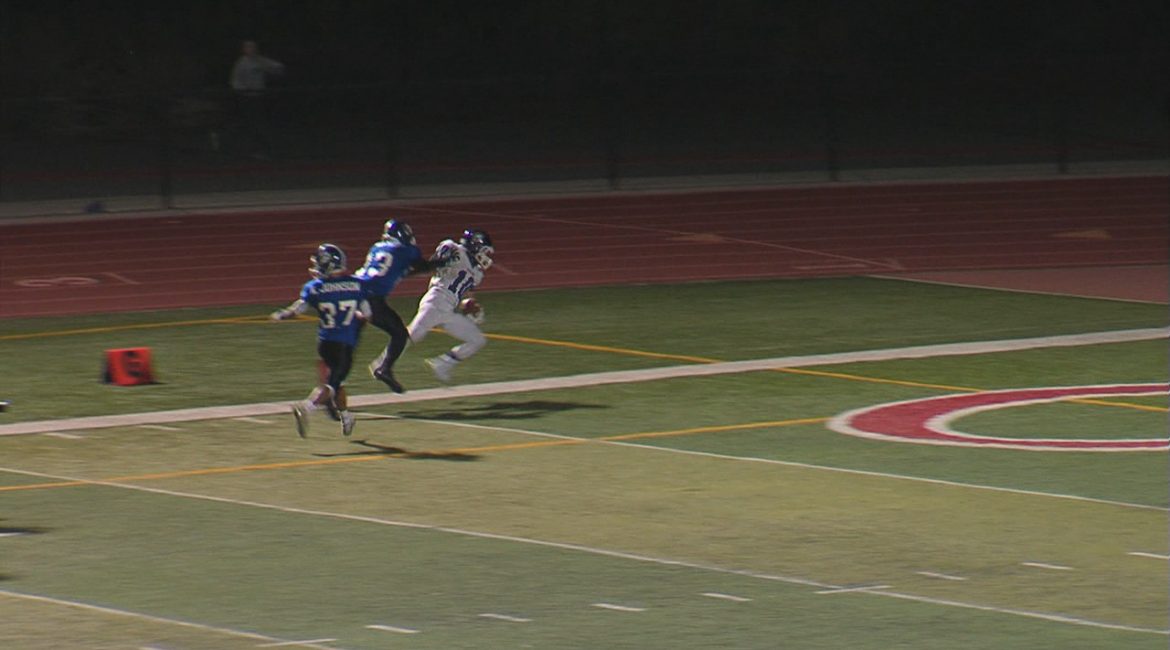 The Analy-Petaluma Shootout…Based on the numbers at MaxPreps the two teams combined for 920 yards in total offense. So there are a few from that classic that make this list.
Jack Newman (Analy)…Passed for 345 yards and four touchdowns. It was his highest passing game since the opener against Casa Grande. Since then he has basically played half of the games and still is over 2,600 yards and his next touchdown pass will give him 40 for the season.
Osiris Zamora (Analy)…The Tigers don’t run the ball often, but he did score two touchdowns and gained 60 yards rushing. He also caught eight passes for 84 yards.  On the season he has over 1,300 yards of total offense and a team high 21 touchdowns.
Ross Simmons (Analy)…Four catches for 90 yards and two touchdowns. Of course he made THE CATCH. In the category that is: “timing is everything”.  It is the first time he has had two touchdown catches in one game.
Lucas Dentoni (Petaluma)…Rushed for 192 yards. He carried the ball a season high 31 times. The previous high was 17. He also scored a touchdown, which he has done in every game except the opener against Windsor. To show there was some defense, he led Petaluma in tackles with 13.
Brendon White (Petaluma)…Rushed for 160 yards and three touchdowns, which are both season highs. He also took in two-two point conversions. The Petaluma quarterback has both passed and rushed for over 600 yards on the season.
Luke Wheless (Petaluma)…105 yards on only 11 carries and a touchdown. That puts him over the 700 yard mark for the season. He has scored at least one touchdown in four straight games.
Jose Ramirez (Piner)…Followed up his 338 yard, six touchdown game against Healdsburg with 174 and three in a 42-6 win over El Molino. He reached the 1,500 yard mark on the season and needs one touchdown to hit the twenty mark.

Spencer Torkelson (Casa Grande)…Rushed for 117 yards and three touchdowns, which are both season highs, in a 41-17 win over Montgomery. He started the scoring with a 43 yard run. He has scored five of his seven touchdowns in the last two weeks.
Rancho Cotate Record Book…They need another one as Gunner Mefferd and Chris Taylor-Yamanoha have broken just about every offensive record.
Gunner Mefferd (Rancho Cotate)…His records include yards and passing touchdown for both a season and career.
Chris Taylor-Yamanoha (Rancho Cotate)…He is No. 1 in catches for career and a season. He actually broke the record for catches last season. He needs 14 to equal that mark this year. He also has the school record for receiving yards in a career and is 15 yards short for a season. Add to it the school record for both touchdowns for a career and a season.
Kaylor Sullivan (Fort Bragg)…Ended a super regular season by passing for 388 yards and four touchdowns in a 41-0 win over Cloverdale. On the season he has passed for 3,750 yards and 46 touchdowns.
Lucas Triplett (Fort Bragg)…Sullivan’s main receiver caught 15 balls for 179 yards and three touchdowns in the win over Cloverdale. On the season he has 1,275 yards receiving and 19 touchdown receptions.
Nick Vollert (St. Vincent)…Five catches for 63 yards and two touchdowns in a 26-8 win over Emery. He had 1,017 yards receiving on the season and is the first player in St. Vincent history to reach the 1,000 yards receiving mark.
Delaney White (Santa Rosa)…She made it four for four in NBL Cross Country Championships. She is the first male or female to win four NBL Championships. She did it by breaking the eighteen minute mark for the first time, running the three mile Spring Lake course in 17:30.
Maria Carrillo Boys and Girls Cross Country Team…While White got the personal headlines, Maria Carrillo took the team championships. This is nothing new. The Maria Carrillo Boys have won ten of thirteen NBL championships. The Maria Carrillo Girls have won thirteen straight.
Middletown Fall Teams…When life is normal it is hard at times to keep it together. Things have been far from normal for the Middletown community. Yet somehow, someway, the fall sports teams have kept things together. Both the Boys and Girls Soccer Teams, along with the football and volleyball teams make the North Coast Section Playoffs.
Sonoma Academy Girls Soccer Team…The No. 1 seed in Division 3 meets Middletown Wednesday Afternoon in one of the semi-finals of the North Coast Section Playoffs. The No. 1 seed has earned the right to host the game. They gave up the home field advantage to Middletown just because.
For nominations for this page:
My email address is jacpasquini@comcast.net
You can also follow me at twitter @homer2612
Share